Hate is in the air.

In the run up to the recent Brexit vote, the UK Independence Party's Nigel Farage trotted out a poster of thousands of brown-skinned people massing toward England. The photograph used in the poster was of Syrian refugees, fleeing war, crossing the Croatia-Slovenia border in 2015. 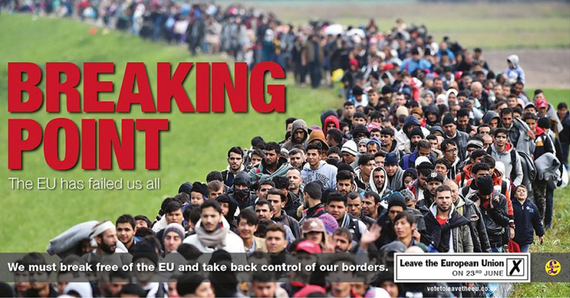 In a remarkable coincidence, the poster was virtually identical to a scene from a Nazi propaganda film, part of the Third Reich's own anti-immigration campaign: 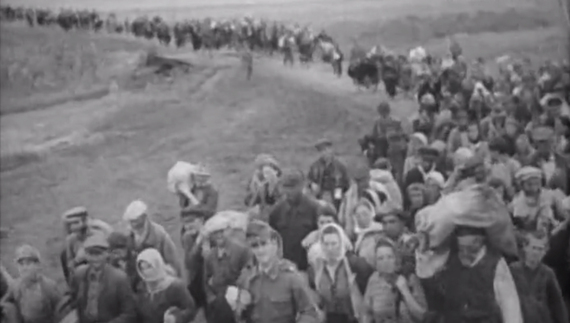 The film warned Germans of the threat of "Eastern Jews" flooding into the country, bringing with them "crime, corruption, and chaos."

On the other side of the Atlantic, presumptive GOP presidential nominee Donald Trump opened his presidential campaign last June by promising to build a Great Wall to block hordes of Mexican criminals and rapists from entering the country.

Expanding his anti-color commentary to stoke fear of Muslims, Trump asserted that between 27 percent and 35 percent of all Muslims worldwide are "militant" according to Pew Research.

Pew Research has no knowledge of the statistics quoted by Trump. Angel Rabasa, a senior political scientist at the RAND Corporation, said, "I don't know where Mr. Trump got the figure of 27 or 35 percent of Muslims that want to go to war with the U.S. As far as I know there is no scientific basis for that statement."

35 percent of the worldwide population of Muslims equals a number that exceeds the population of the United States by nearly a quarter billion people. If Trump is right, we're in serious trouble:

As scary as a half billion bloodthirsty terrorists may seem, the data suggests that the terrorist threat level may not be quite as severe as Trump's hyperbolics indicate. As it turns out, lightning kills more Americans than Islamic terrorists:

Facts notwithstanding, Trump declared the United States would have "absolutely no choice" but to close down mosques and require American Muslims to register in a database. In a Yahoo News interview, Trump said he would not rule out "a special form of identification that noted their (Muslims) religion."

According to Trump, it's not only ok to be racist; it's a civic responsibility. That message has been received loud and clear by 21st-century Brownshirts, who are perpetrating hate crimes in record numbers. In 2015, there were 29 attacks on mosques in the United States, more than triple the number in 2014.

Dozens of other incidents include:

Trump's dire warnings have received a generous boost from major media outlets, which have provided the leader of the Republican Party with $1.9 billion in free television coverage. Nine out of 10 stories by news media outlets portray Muslims as either terrorists or warlords. If this reporting is truly representative of the mindset of Muslim people, it suggests that over 1.4 billion Islamic terrorists are hell-bent on destroying the west. A more likely explanation is that news networks are chumming the troubled water, driving ratings and ad revenues through the roof.

At the Morgan Stanley Technology, Media & Telecom Conference earlier this year, CBS executive chairman, president, and CEO Les Moonves said the Trump campaign "may not be good for America, but it's damn good for CBS."

"Man, who would have expected the ride we're all having right now?" Moonves said, "... The money's rolling in and this is fun."

"Fun" does seem like a much more constructive way to view racism compared with the more traditional "abominable" perspective. Maybe those on the receiving end of hate simply need a silver lining playbook to fully appreciate the many benefits of racism. In addition to being fun, racism can be profitable -- even patriotic. Sure, getting beat up by a skinhead can be painful, but consider the greater good of serving CBS' bottom line and Donald Trump's ego. Sometimes, you just need to take a hit for the team -- literally.

As genius as our country's founding fathers were, it seems they left out a couple of important caveats in both the Declaration of Independence, as well as the Bill of Rights. As it turns out, all men and women are indeed created equal, except when their equality stands in the way of the pursuit of profit and power. And while the free exercise of religion is bedrock of the Constitution, that foundation can be cracked wide open whenever it becomes an obstacle on the way to becoming the most powerful person on Earth.