There's a neighborhood I've heard about, with the most remarkable sense of community. On one block there's a giant warehouse outfitted for woodworking, photo studios, computer rooms, and painters studios. Across the street two women collaborate with building owners to build rooftop gardens and parks. Last year, everyone in the neighborhood chipped in to help another pair of women open a bookstore so they would have a nurturing place to bring their kids together for story time and to meet their favorite authors. There are tree nurserys that work with the schools to teach about native plants and beekeeping; restaurants that exclusively serve food raised and prepared nearby; clothing boutiques that carry local designers' fashions, collective coffeeshops that sell fairtrade coffees next to another baker's cupcakes; homes use energy from the solar panels on their own roofs; and there's even a movement to create their own currency.

I admit, this isn't just one neighborhood in some small town somewhere. But these businesses are real, in real neighborhoods in real small towns and cities all over the country, as is the fact that they are supported by their communities as much as they make them better places in which to live. These are not boring nicnack shops, or franchise restaurants. They are vibrant, successful businesses run by passionate, driven individuals who know that we all have a responsibility to look at all sides, all ends, of everything we produce and consume. Just increasing our own personal wealth and our own influence is not enough, regardless of what you say you're going to do with the money later. If your heart is really in it, you'll look to see how you can make this a better, more sustainable, more accessible, more exciting place to live for as many people as possible with every decision you make.

Okay, none of these businesses are going to be the next Facebook, which seems to be the holy grail of entrepreneurship. But do we really need another place to play Farmville? How about a way to support actual farms? And you have to know that Facebook didn't spring from the head of Mark Zuckerberg fully formed. It was a place for college kids to stay connected. What if instead you put your energy behind connecting alternative energy sources, or connecting school kids with where their food comes from? Who knows where it will lead.

Somehow, small businesses have got a bad rap from the entrepreneurship community. Somehow if it doesn't incorporate VC's, business plan competitions, and massive potential for scalability, it isn't worth the brick and mortar it's built with. Unfortunately, if you believe that, you're missing out on hundreds of thousands of inspiring stories, and the chance to make a solid difference in the lives of people in your community, even if you won't make the cover of Forbes. So if these exciting business opportunities aren't in Silicon Valley, where are they?

Well, some of those businesses I mentioned--the artists workspace, the bookstore, and the greenroof landscapers--are in New York. Others are in San Diego, CA. And San Francisco, and Portland, OR. There are small business hubs in Denver, and Austin, and New Orleans. Of course, they are in fact in every city and town in the country. But if you just think about the old Main Street USA, you think of dry cleaners and teeshirt shops, and probably think 'how boring is that? I'd rather work on the next Facebook.'

Let me tell you about Holstee, a teeshirt company started by two brothers, Mike and Dave Radparvar, in their mid twenties. They had some nutty idea about putting a pocket on the side of a teeshirt. Not that great of an idea, maybe. But they didn't just think about pockets on teeshirts, they thought about how to make this the best damn teeshirt company in the world, using exclusively sustainably and safely made materials. They found fabrics that they track back to their source, they found seamstresses who believed in the project and then paid them a solid price for their labor, they slept on friends floors and ate ramen and put everything they had into building this product and building a website that would get it out into the world. They incorporated streaming music from the Holstee Boombox on their site, they wrote about the women building the shirts, they started selling products from other small companies they liked in their e-commerce site, they encourage visitors to be part of the community, saying "tell us what your skills are and we'll find a place for you to help". Another business that makes biodegradable dog poop bags -- I'm not kidding -- commented on their packaging, and now the Holstee shirts ship in biodegradable bags, that you can then take with you when you follow around your dog. Yes, all of these innovations have got them talked about in the press, and they're selling alot of teeshirts. And they're still two young brothers eating a lot of ramen, and having alot of fun, and doing alot of the right things by this planet. And I guarantee you they aren't working on their exit strategy. 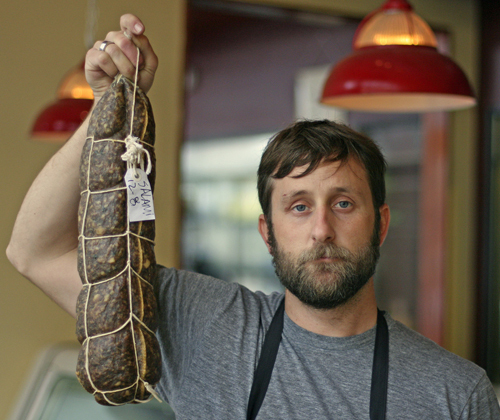 Here's another story--a story as old as civilization--a guy got fed up with his corporate job selling consumer electronics, and decides to open a restaurant. Boring. But it wasn't because he was a good chef--he didn't know the first thing about cooking--it was because he loved everything about his neighborhood except that there wasn't a good, healthy, sit-down place to hang out with friends without getting on the freeway. And because he wasn't a 'restaurant guy', he didn't really know how the restaurant industry was run before getting into it--and it turns out it he didn't like it. He didn't like that the only suppliers in his region carried meats and produce from far outside the region, so he stopped buying from them and went to the local sources himself. He didn't like that his state's regulations on server's wages, combined with traditional tipping policies, actually incentivized poor service--so he paid everyone in his restaurant better, added a service fee, and abolished tipping. This all means that prices at his restaurant, San Diego's The Linkery, are higher than his neighbors', but it turns out that people are willing to pay for better food and better service. He promotes the farms and butchers that his food comes from, he collaborates with other local businesses to support biking and public transportation initiatives, and he doesn't try to compete with other restaurants that have popped up because in the end they're all serving his original purpose of making the neighborhood a better place. It's not boring, it's not been done. It's a totally innovative, forward thinking, controversial, news making local restaurant. And he would love for you to open another one around the corner.

Somewhere along the line we forgot that this is entrepreneurship, too. Maybe because its easier to search for Mark Zuckerberg than it is to learn about the woman who started the organic ice cream shop at the end of the block. But at one point, actually making something was an honorable trade, and contributing to making your community a great place to live got you keys to the city and a photo on the front page. Sure, what we make and what we sell might be different now--for our planet's sake I hope it is--but we can still use our creativity, our passion, our drive, our entrepreneurial spirit without losing sight of our neighbors.

I don't know if there's really one neighborhood anywhere with community bookstores and artists spaces and urban gardens and organic ice cream shops and beekeeping and local produce and revolutionary restaurants and internet teeshirt shops all on the same block. But wouldn't it be an awesome country to live in if we made that every neighborhood?