September 17th marks the 4th anniversary of Occupy Wall Street. What began as the American manifestation of the Arab Spring was focused on economic inequality, Wall Street, big banks and government corruption.

In Los Angeles, Occupy would see trans-liberation and foreclosure resistance get traction early on, and with Black Lives Matter a star on the distant horizon, no one understood that a full frontal assault on cis-gendered, white, male, hetro-normative dominance and anti-blackness was just around the corner. In short, that the shelf life on white supremacy in America had expired and that the networks, alliances and social media connections formed at Occupy would facilitate the delivery of the message to the masses.

These days however, Occupy is a dirty word in Los Angeles. Millennial organizers and activists seeking to distance themselves from their less than sophisticated origins have abandoned the brand altoeghter, though elsewhere others are still functioning within the Occupy matrix. A few thousand Occupy pages and groups on Facebook are still up and running.

But long before all of that, back in October of 2011, before 1500 LAPD troops in riot gear evicted 2000 peaceful protestors from the OLA encampment, before the city of Los Angeles agreed to pay $2.45 million in 2015 to settle a class-action lawsuit with those unlawfully arrested, I sat down on the north steps of the neoclassical/art deco mash-up that is City Hall and decided to tag along with new revolution. 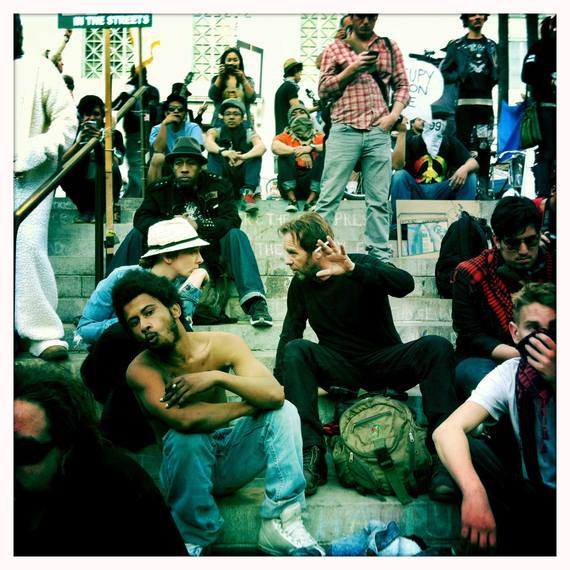 Before Trump's vitriol unwittingly mobilized the brown vote and Kim Davis used a government office to saturate the mainstream media with the message of the religious liberty movement. Before Facebook's rainbow filter helped 'Mericans queer it up online when the Supreme Court legalized gay marriage. Before the ink dried on the DOJ's damning report on Ferguson's criminal justice system and Caitlyn Jenner hijacked trans-liberation, Malibu Barbie style and Bernie Sanders was just senator from Vermont... before all of that, there was Occupy.

I spent a couple years in a tent with a camera and shot over 3,000 hours of footage at protests before emerging with a feature documentary film called Radicalized, which has been called the definitive voice of generation film.

Occupy Los Angeles, the largely dismissed, mostly misinterpreted orphan child of the Occupy movement became the largest and one of the longest standing major US Occupations. Radicalized is the untold story of the movement from the inside. It premieres on September 18th at the Arena Cinema in Los Angeles.