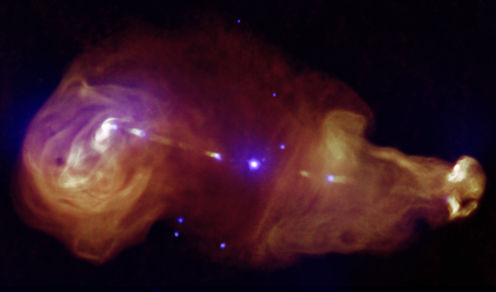 Most pictures of galaxies that you see, such as the beautiful images from the Hubble Space Telescope, are optical images. These are made using telescopes which detect light in the same wavelength range that our eyes see. However, scientists can design telescopes which use different parts of the electromagnetic spectrum, such as shorter-wavelength ultraviolet light or longer-wavelength infrared and radio emission.

When we use a radio telescope to look at galaxies, we find that some have pairs of giant jets extending from their centre out into space.

Jets - powerful, lightning fast particles - are the beasts of the universe, far larger than anything visible in optical image. They often stretch to many millions of times the size of the galaxy itself. There is often no evidence of these jets in the optical images.

They also don't give up their secrets easily. We have a good idea what jets are and how they're formed. But, for example, we don't understand yet what causes these jets to start in the first place. That's where the powerful Square Kilometre Array (SKA) radio telescope that's currently being built in South Africa enters the picture. Its size and scope can help scientists probe more deeply than ever before.

The making of a jet

So how are jets formed?

In some galaxies, however, gas and dust is falling into this supermassive black hole causing vast quantities of energy to be released. This sometimes results in hugely energetic streams of particles - channelled by twisted magnetic fields - being ejected from the galaxy centre.

These powerful fountains of particles are spewed out into space at nearly the speed of light. They form the impressive jets visible in radio images. These particles travel through space for many millions of kilometres until they are eventually slowed down and stopped when they interact with old clouds of gas left over from when the galaxy formed. These jets are immensely powerful and can be thousands of light years across.

Although we understand the processes forming the jets, we don't know what causes these jets to start in the first place.

Some observations suggest they may be triggered when two galaxies collide, thrusting large quantities of gas and dust into the path of the supermassive black hole at the galactic centre. But this certainly does not seem to be the case for all radio galaxies. There is evidence that some radio galaxies stop ejecting the streams of energetic particles, then start again many thousands of years later. However we don't know if all radio galaxies go through several active phases like this, or if this is unusual.

Still so much to learn

It takes a long time for radio galaxies to grow so large - sometimes up to tens to hundreds of millions of years. This means scientists can't study radio jets by watching one grow. Instead we have to look at lots of different radio galaxies at different stages in their life cycles.

And understanding radio galaxy jets is important. Because they're so powerful, these jets have a strong influence on both the galaxy they come from and its surroundings.

From building models of how galaxies evolve with time and comparing them to observations, scientists know that something must be dramatically slowing down the rate at which stars form in the most massive galaxies. Scientists believe that radio jets may be responsible. They heat the gas within the galaxy, preventing it from forming into stars.

However, this process is not well understood. For example, there is also evidence that radio jets may increase the rate of star formation in some galaxies, by compressing gas into dense clouds. Understanding how radio jets interact with their host galaxies and wider environment is key to understanding how galaxies form and evolve with time. This is one of astronomy's key unanswered questions.

The completion of the SKA, which is being built in South Africa and Australia, will help answer these questions.

When the SKA is fully operational - sometime after 2020 - it will observe up to a billion galaxies. That includes some of the very first galaxies to form. Using these observations, astronomers should be able to unlock the secrets of radio galaxies.

The MeerKAT telescope, a precursor to the SKA, is already taking data at the South African site, in the remote Karoo, and will allow us to start answering some of these questions next year.

Perhaps these mysterious beasts of the Universe won't remain a mystery much longer.