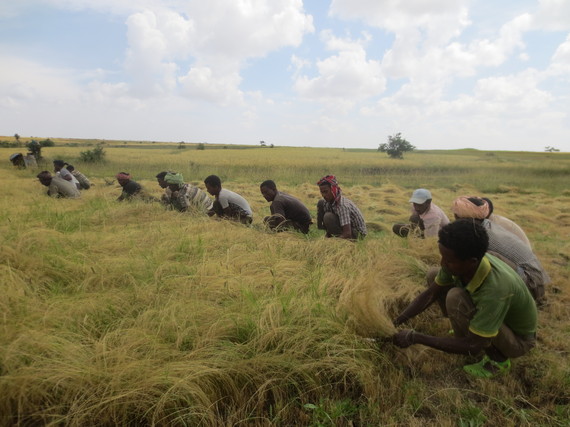 Radio is helping Ethiopian farmers make the best of a bad situation as they deal with the effects of the worst drought in decades, writes Kevin Perkins of Canadian development organization Farm Radio International (FRI).

There is an often-overlooked hero in farmers' battle against drought. Not just a fair weather friend, radio is helping farmers in Ethiopia deal with the impacts of the most severe drought in 50 years. Even before official announcements of drought were made, FRI and its partners were working to create radio programs to help farmers deal with the lack of rain -- as well as the threat of sudden, heavy rains associated with a particularly strong El Niño.

The situation for Ethiopian farmers

Drought is a regular occurrence in the Horn of Africa. Indeed, my first job as a Canadian NGO worker in the late 1980s involved supporting emergency food aid projects in Ethiopia. In more recent years, Ethiopia has been able to deal with drought without appeals for humanitarian assistance -- thanks to heavy investments in the agriculture sector that doubled food production in the country and improved early warning and preparedness strategies. So what is so bad about this particular one and why was Ethiopia so hard hit?

Both the short (Belg) and long (Meher) rainy seasons failed to deliver much precipitation in Ethiopia last year. Now, the unpredictable and heavy rains associated with El Niño are threatening what crops and livestock are left after more than a year of drought. Farmers can quickly go from not having enough rain to having far too much.

Ethiopia is particularly vulnerable to drought because about 80 percent of its population lives in rural areas, where most people depend on small-scale, rain-fed subsistence agriculture and pastoralism for their survival. Without rain, most of the country's farmers cannot maintain healthy crops and livestock -- let alone food on the table.

Crops have failed and livestock are weak, dying or dead. And Ethiopia is now home to the greatest number of Africans lacking food as a result of the drought. According to the UN Office for the Coordination of Humanitarian Affairs, more than 10 million Ethiopians -- almost one tenth of the population -- are currently in need of food aid.

Food aid is certainly a very critical response in dealing with the situation in Ethiopia and elsewhere in Africa. But it is not the only one.

How radio is helping

Inexpensive and widely accessible, radio reaches the largest audience globally in the shortest possible time. And it is the medium of choice for the world's small-scale farmers, who are typically limited in terms of their financial resources, literacy and access to other communication tools.

FRI has spent almost four decades helping the world's most vulnerable farmers over the airwaves, connecting them to life-changing information and opportunities to have their voices heard. Our work is now focused on Africa, and we have an office in Ethiopia.

Before the drought took hold, our Ethiopia team was in the midst of designing a multi-month radio program on sorghum (a staple grain) for farmers in the Tigray Region. It was an in-depth planning process, which involved consultations with local partners and farmers. At the time the radio program hit the airwaves, there had been no official declaration of drought. But as it aired and drought conditions set in, it became increasingly clear that the carefully planned radio program was not in alignment with the new reality facing farmers.

My colleague Freyhiwot Nadew, the head of FRI's office in Ethiopia, knew there was a problem because of what farmers were saying when they called into radio stations.

"The original radio program featured topics such as micro-irrigation and marketing. But learning how to use water and sell their harvests was of no use to farmers dealing with drought and failed crops. The radio program had to change in order to actually help farmers."

Securing funding for and planning new projects take time. Thankfully some of FRI's funders in Ethiopia were open to quickly shifting the focus of existing radio programs. In Tigray and other hard-hit areas, radio programs have been overhauled to help small-scale farmers deal with the combined threat of drought and heavy, unpredictable rainfall.

Radio is helping farmers to harvest and store water from the occasionally heavy rains that come with El Niño so that they can use it to water their livestock and irrigate small gardens. They are learning to time their harvests just before heavy rains in order to save their crops (as did the teff farmers in the photo above). Farmers with failed crops are learning to harvest remaining stubble as feed for their livestock, along with other alternative food sources (such as byproducts from sugar cane factories). Pastoralists are being encouraged to consider switching one ox for four to six goats because, while they cannot sell one sixth of an ox, they can sell one of six goats. And they are learning about how to make sure their drinking water is safe and to prioritize the wellbeing of pregnant women, nursing mothers and children -- who are often most vulnerable to malnutrition.

Only about half of the target of 1.4 billion USD in humanitarian assistance needed for Ethiopia has been raised and the situation continues to be urgent. At the end of January, the UN World Food Programme announced that 500 million USD is needed in order to maintain the supply of food aid in the country beyond April. International food pledges are beginning to come in; however, while critical, food aid cannot be the only approach to helping people dealing with drought. Radio clearly has a key role to play in helping farmers minimize the impact of drought, avoid further losses and prepare for the future.

For farmers in Ethiopia, much will depend on whether the rains come this year, but one thing is for sure: Radio will be there to help them deal with whatever comes their way.