When artist and writer Lauren Redniss is asked why she created her new graphic biography Radioactive: Marie & Pierre Curie, A Tale of Love and Fallout, her reply is as striking and powerful as her work: "I wanted to create a visual book about invisible forces," Redniss said. "In this case, radioactivity and love. I was drawn to the Curies' story because it is full of drama - passion, discovery, tragedy, scandal."

In other words, this is the story of Marie and Pierre Curie as no chemistry teacher has ever presented it. 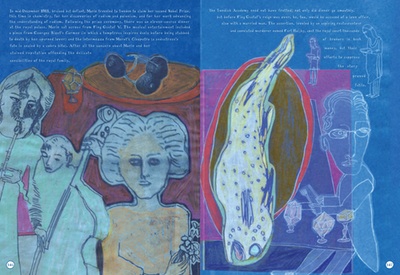 Radioactive
is a visually-stimulating and serious tale depicting the discovery of radioactive power. Part love story, part graphic novel, part science textbook, the critically-acclaimed work is weaved together with such ease that readers will wish Redness could teach science at their local junior highs.

Spoilers withheld, one of the tragedies in the Curies' lives was the freak accident that took Pierre's life in 1906. One of the scandals is Marie Curie's later love affair with French physicist Paul Langevin. Want more? Read it!

The cyanotype, a camera-less photographic technique that uses the sun's UV rays and results in blue prints, figures prominently in Radioactive's aesthetic. "I chose to make the book's images as cyanotypes because I thought it added other layers of meaning," explains Redniss. "Concentrated radium - one of the radioactive elements discovered by the Curies - glows a blue color."

Redniss' art is spectacular on gallery walls as well; the Radioactive exhibition opens today at The New York Public Library. Adding another dimension to the work, the exhibition displays Redniss' visuals and text but also takes the viewer through the creative process behind the book.

A Fellow at the Library's Cullman Center for Scholars and Writers in 2008-2009, Redniss was inspired by many of the Library's collections. The Radioactive exhibition includes 50 of Redniss' works but also many of the Library materials that influenced her work. "It was fantastic to be able to have access to the Library's collections of artists' books, go to the third floor and look at hand painted 19th-century travelogues, to sit in the map room and look at gorgeous old maps with allegorical drawings of earth, wind, air and fire in the corners; to study illuminated manuscripts in the Rare Books Division." Redniss also consulted Library materials to create a font for the book named Eusapia LR (after the Italian spiritual medium Eusapia Palladino).

Research for the book occurred outside of the Library as well. "I traveled to the Nevada Test Site to talk to weapons specialists. I went to Hiroshima to interview atomic bomb survivors. I spoke with an oncologist exploring innovative radiation treatment in San Bernadino, California and the Idaho National Laboratory's Director of the Center for Space Nuclear Research about how nuclear power and propulsion can enable space exploration - and crystal cities on the moon," enthuses Redniss. "A biologist studying the land around the Chernobyl nuclear plant talked with me about his research on the animal populations in the 30 years since the disaster there. In Warsaw I visited the house where Marie Curie was born. I interviewed Marie and Pierre Curie's granddaughter at the Curie Institute in Paris."

Influenced by the Library and her travels, Redniss, a faculty member at New York City's Parsons The New School, then used her work in the classroom to inspire her students in a course about mounting the exhibition and its accompanying website. Created by the Parsons students, the Radioactive website allows users to experience the exhibition through an atom animation, a game that offers a peak into the life of Marie Curie, and a "make-your-own-cyanotype" feature using images from the Library's Digital Gallery.

After four years of steady labor, four hundred tons of water, and forty tons of corrosive chemicals, on March 28, 1902, they [the Curies] managed to extract one tenth of a gram of radium chloride.

MARIE: "I shall never be able to express the joy of the untroubled quietness of this atmosphere of research and the excitement of actual progress."

With the constant companionship that accompanied their research, the Curies' love deepened. They co-signed their published findings. Their handwritings intermingle in their notebooks. On the cover of one black canvas laboratory log, the initials "M" and "P" are scripted directly one atop the other. 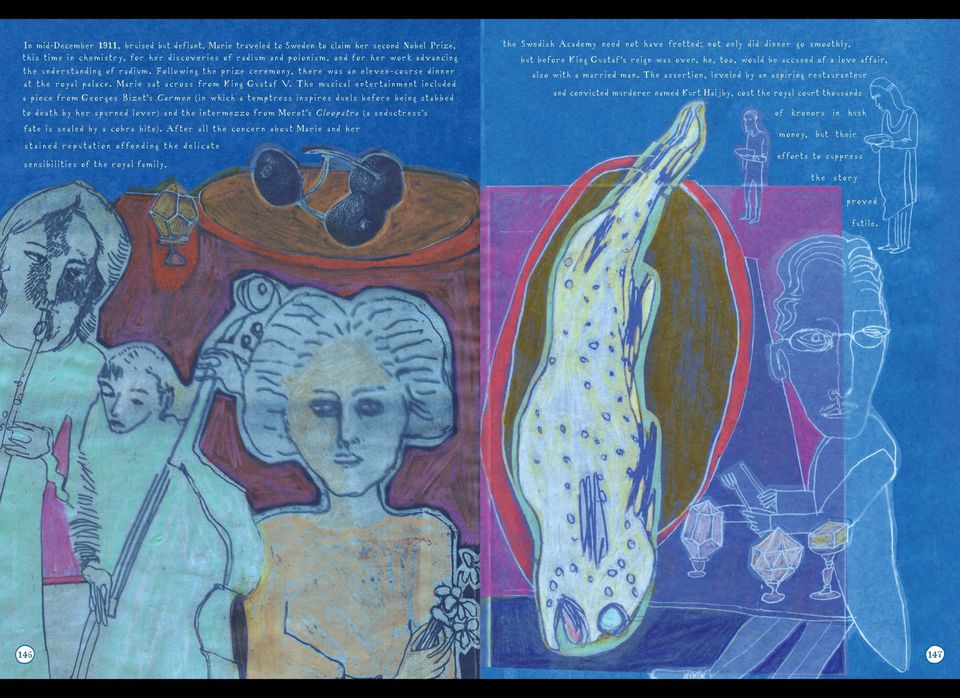