Ecuador's President Rafael Correa kept his word to the gay community and apologized a second time on Sunday, after his re-election, for homophobic comments made last year.

At the time, the Ecuadorian leader had used the word "faggot" to insult a reader who had criticized his government on a local newspaper's Facebook, referring to him with the same term. Correa later explained he had used the expression in an attempt to call his offender a "coward," according to the Spanish news agency EFE.

However, after the LGBT community in the country demanded an explanation, the president apologized in writing and ensured he was not doing it to win votes but because he was genuinely remorseful about the incident.

After winning his third term in office, Correa took a few minutes out of his re-election speech to reassure the country that his government has a genuine commitment to defend everyone's dignity and equality.

“We are diverse but never unequal,” he said.

As reported on the website Blabbeando, the Latin American president expressed his full support for all Ecuadorian members of the lesbian, gay, bisexual and transgender groups.

“A few months ago I used some inappropriate words that were offensive to LGBT groups, and I apologized in writing - and I stated I would apologize again after winning to make sure they knew I wasn't doing it simply for political gain.

Once again I'd like to express my apologies to those LGBT groups... We were born and grew up with stereotypes and stigmas and we have to fight against that social deformation… Let's offer them [the gay community] all our support and personally - my full respect and the effort and commitment to eliminate all types of discrimination in this country.”

The gay community has consistently been a victim of this type of transgressions by politicians from Latin American countries. Last year, Venezuela's Vice President Nicolas Maduro called the leaders of the opposition party "snobs, fascists and faggots," in an effort to offend them, prompting the resentment of many LGBT supporters.

Other leaders like Bolivia's president Evo Morales, have also faced criticism after declaring in 2010 that "when men eat chicken [with female hormones] they experience deviances in being men." The Bolivian government responded to backlash by promising they would "ratify" respect towards sexual liberty as the Bolivian constitution establishes it. 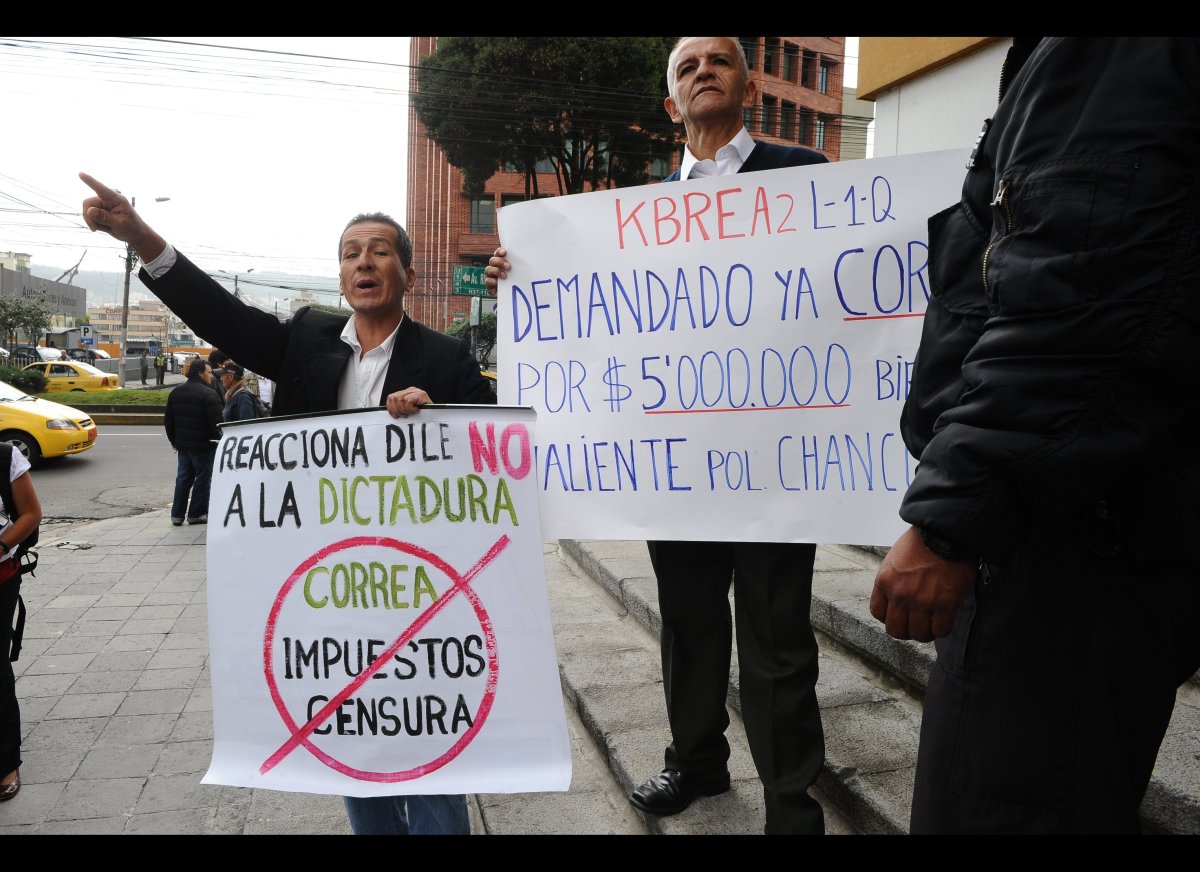 1 / 6
Protests Against El Universo Newspaper Suspension
Opponents to Ecuadorean President Rafael Correa shout slogans outside the National Court of Justice (CNJ) in Quito, on January 24, 2012, after the cassation appeal in the trial against El Universo newspaper was suspended. Correa had sued the El Universo newspaper for $80 million in March 2011, alleging 'defamatory libel' over a column by former opinion page editor Emilio Palacio accusing the president of crimes against humanity.
RODRIGO BUENDIA/AFP/Getty Images