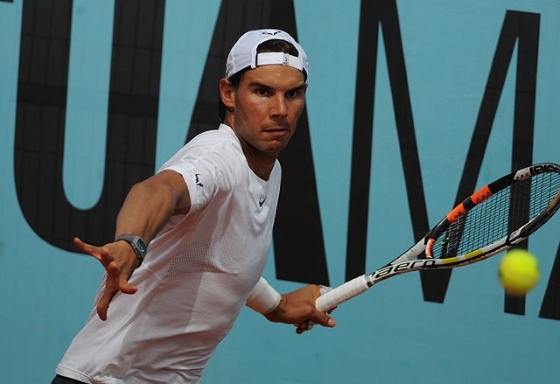 Rafael Nadal holds a winning record against almost all his rivals and is a strong candidate for greatest player of all time. The epitome of a never-say-die fighter, Nadal has become a byword for mental strength, confidence and steely resolve.

Yet underneath the formidable façade lies an uneasy mind. Throughout his career Rafa has been engaged in an internal battle to exert control over his emotions and banish a persistent sense of anxiety. Nadal has been winning this inner battle for most of his career, but in his disappointing 2015 season he lost the mental struggle again and again.

His recent victories in Monte Carlo and Barcelona may suggest he is overcoming this struggle, but long-term Nadal will need an enduring shift in his mental game if he is to get back on top.

We know more about Nadal's inner life than any of the other big four players because he provided a surprisingly candid account of his thoughts and feelings in his 2011 autobiography Rafa. The book was published at the height of his achievement, when he was reigning champion at three Slams, and there seemed no end in sight to what he could achieve.

Control is Nadal's guiding mental principle. His publicity chief, Benito Perez Barbadillo, describes Nadal as 'a person who needs to be in control of everything'. This applies off-court as much as on. Nadal's mother says he is a 'super-sensitive human being full of fears and insecurities'. Nadal has a range of ongoing and significant off-court fears. He's afraid of the dark, of thunder, of animals. He has a lifelong fear that his family will fall ill or be involved in an accident. He is uncomfortable with driving and swimming.

He responds to his many fears by trying to exert control and remove uncertainty. He calls his sister as much as 10 times a day to check she is safe and well. He drives and swims extremely cautiously. He won't let his family go outside if there's a storm brewing. He sleeps with the light on.

The Spaniard's multiple on-court rituals, meticulously carried out in every match, are also performed in order to control anxiety and achieve a comforting sense of things being in order. In Nadal's own words, the rituals are 'a way of placing myself in a match, [and] ordering my surroundings to match the order I seek in my head.'

Ritual and avoidance behaviors are common ways in which anxious people deal with their difficult mental experiences. But this mental approach is at risk of breaking down if rituals are not performed successfully. Nadal explains in his book that his system of rituals is 'like a great matchstick structure: if every piece is not symmetrically in place, it can all fall down.'

Did Nadal's psychological 'matchstick structure' fall down during 2015, his least successful year on tour since 2004? Rafa has been clear that a 'mental injury' was at the root of his unprecedented slump in form. He has spoken about his battle with nerves, and how psychological tension and low confidence had impacted his ability to hit effective forehands, once his most effective weapon.

His mental difficulties led him to squander commanding leads in key matches, notably against Fabio Fognini at last year's US Open and Fernando Verdasco in Melbourne this year. Rafa was no longer in control of his anxiety. Instead it seemed to be controlling him.

Nadal says he has now overcome the mental problems he was having last season, and his two tournament wins in April indicate a significant improvement in form.

His semi-final loss to Andy Murray in Madrid last week reminds us that it's still too soon to say if Rafa can rediscover and maintain his very best form, as he will need to if he is to reach the latter stages of Grand Slams and challenge Djokovic.

A more sustainable mental approach for the latter part of Rafa's career would be for him to switch from a mentality of control to one of acceptance. Instead of trying to control his inner experience, he should practise allowing his anxiety to be there, without attempting to get rid of it.

Nadal's psychology of control requires a great deal of time and effort. The younger Nadal had huge reserves of mental and physical energy to expend on trying to control his negative emotions. Rafa no longer has access to the seemingly inexhaustible energy reserves of his youth.

His experience in 2015 has shown that he needs to adopt a lower energy psychological approach. Tennis psychology based on mindfulness and acceptance enables players to tolerate difficult emotions such as anxiety without responding to them. This allows thoughts and emotions to arise and pass in the mind naturally, freeing a player to focus on the task in hand.

Nadal's great rival, Novak Djokovic, has been thriving on a mindful mental approach for years. The last thing that Djokovic wants is for Nadal to take a leaf out of his book and start practising mindfulness. If Rafa did this, we might see an end to Djokovic's dominance, and a new dawn for Nadal.

Neil Endicott is an author, coach and founder of Mindfulness-Based Tennis Psychology, an online mental training course for tennis players.