NEW YORK -- More than 20,000 police officers and other mourners gathered Saturday at Christ Tabernacle Church in Queens for the funeral of Rafael Ramos, one of two NYPD officers shot and killed in an ambush last Saturday. 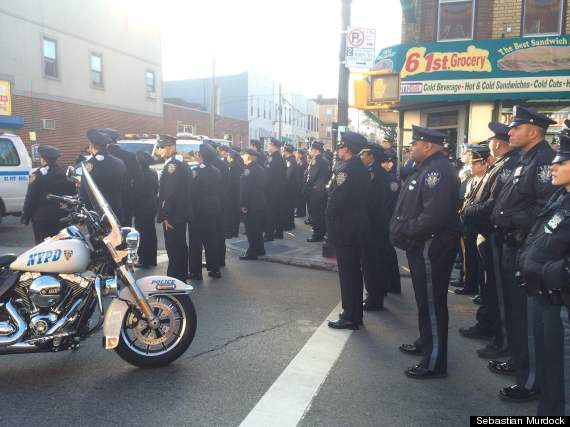 Police line the streets and sidewalks as vehicles pass.

“I’m sure I speak for the whole nation when I say to you that our hearts ache for you,” Biden said. He spoke of his own brush with tragedy, when his wife and daughter died in a car crash in 1972. "I know from personal experience that there is little anyone can say or do to ease the pain," he said.

Cuomo also spoke, denouncing recent threats against the NYPD and saying that "an attack on the NYPD is an attack on all of us." He assured the assembled cops that "75,000 police officers and National Guardsmen statewide have your back every step of the way,” and praised the way the department had handled recent anti-police-violence protests in the city.

In his brief remarks, de Blasio said that "New York City has lost a hero, a remarkable man." As he spoke, officers outside turned their backs on him. 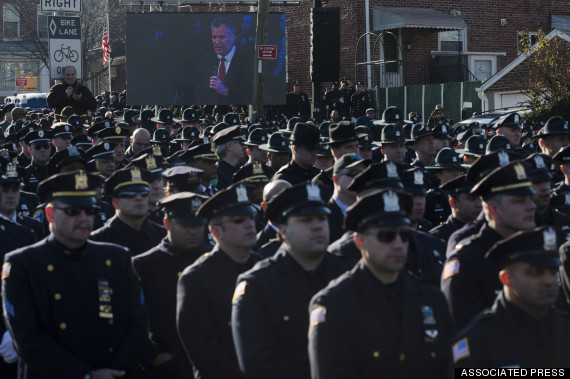 In response to the gesture, the mayor's office said, "The Ramos and [Officer Wenjian] Liu families, our police department and our city are dealing with an unconscionable tragedy. Our sole focus is unifying this city and honoring the lives of our two police officers," WNBC reported.

Tensions between de Blasio and the NYPD, already high, were exacerbated after the murders when officials, including Police Commissioner Bill Bratton, linked them to the protests. De Blasio had expressed support for the protests, which have been taking place since early December after a grand jury declined to indict an NYPD officer for the death of Eric Garner. De Blasio's critics said the protests fostered an anti-police sentiment that led to the killings.

Earlier this week, de Blasio called for a moratorium on the protests until the officers' funerals. Protesters, who condemned the killings, were unhappy with the request. 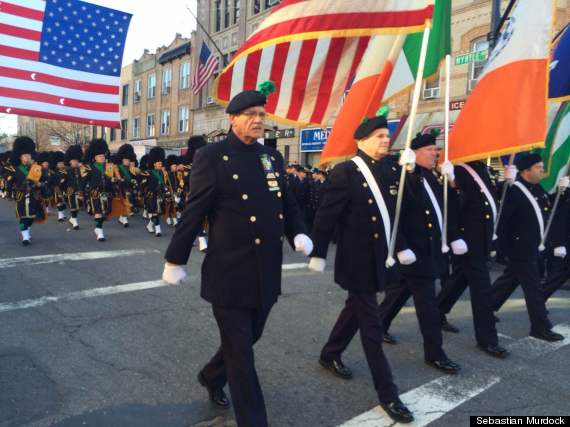 The funeral procession begins with drummers from NYPD's Emerald Society.

Ramos, 40, had been sitting in a patrol car with his partner, Wenjian Liu, in the Bedford-Stuyvesant section of Brooklyn on Dec. 20 when gunman Ismaaiyl Brinsley approached the car and shot the two men to death. Brinsley then fled into a nearby subway station, where he killed himself.

Brinsley, a drifter with a history of criminal activity and mental illness, had boasted on Instagram of his plans to "put wings on pigs." The 28-year-old, who was black, described the violence as revenge for the killings of Michael Brown and Garner by white police officers. He had shot his ex-girlfriend in Baltimore earlier in the day.

On Friday, Ramos' wake drew thousands of officers from around the country. Ramos was remembered as selfless and deeply spiritual; his commanding officer said he was studying to be a pastor, and he had been an usher at the church where his wake and funeral was held.

"My father was a hero," said 13-year-old Justin Ramos, the older of the officer's two sons. “I couldn’t have asked for a better role model." 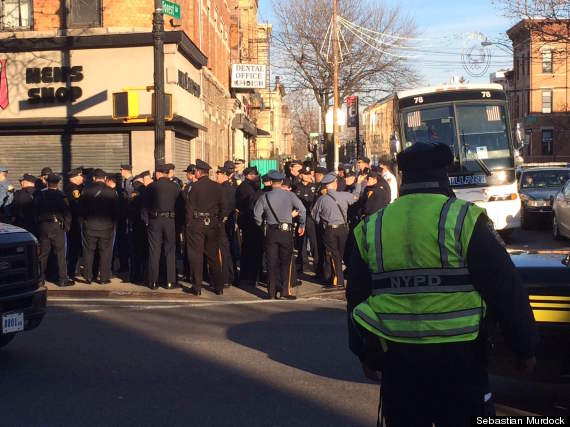 Police officers filing off a bus to attend the funeral.

On Saturday, Queens resident Ken Shirley, a 79-year-old retired transit cop, sat on his stoop with family members as hundreds of police quietly shuffled by before the funeral. Shirley said he is all too familiar with good cops being killed on the job. "It's all very sad," he said. "During my 20 years on the force, two police officers in my class got killed. You never know."

Craig Dinan, a 48-year-old hospital worker who lives just blocks away from the church, called the killings of Ramos and Liu senseless. "There's a lot of sadness today," Dinan said. "What happened was tragic, and for no reason at all." As police motorcades rolled slowly by and helicopters circled low overhead, Dinan gestured at the thousands of officers walking toward the church. "As you can see, they all stick together," he said. "It's a sight to see -- I sure hope it never happens again, that's for sure."

Like many officers and those in attendance, Dinan expressed criticism of de Blasio while praising Pat Lynch, the chairman of the city's largest police union, who laid part of the blame for Ramos' death with the mayor.

"Pat Lynch, he's doing the right thing," Dinan said. "You gotta stick up for your brothers."

At the funeral, Bratton announced that Ramos and Liu had been posthumously promoted to the rank of first-grade detective, the highest level. Beyond the symbolism of the honor, it will mean an increase in benefits paid to their families.

On Saturday night, the Empire State Building was lit in blue with a rotating red siren in honor of the slain officers.

Here's video of the Empire State Building glowing blue with a moving siren at the top https://t.co/HPbseBkQWH