Monkeys crossed the Atlantic Ocean. Really. Some biologists will tell you that humans (and all other apes) are monkeys in an evolutionary sense, so you could say that monkeys have voyaged over the Atlantic many times...in boats, starting with the Vikings, and, later, in planes. But millions of years earlier, monkeys in the normal sense--ones with fur and long tails and no boat-building skills--almost certainly made an unlikely and accidental ocean crossing from Africa to South America.

When I bring up this case of the ocean-crossing monkeys, scientists and non-scientists alike often react with undisguised incredulity. Even people who would normally take me seriously are likely to flash a bemused smile. After all, how could monkeys possibly get across the Atlantic? Even if they were aboard some sort of natural raft (like a clump of vegetation), wouldn't they die of thirst or starvation long before the trip was over? On "intelligent design" websites, creationists have even argued that the willingness of evolutionists to believe that monkeys crossed the Atlantic just shows how far scientists will go to support Darwin's theory. (To drive that point home, one website features a cartoon of two monkeys on a raft, arms outspread like Kate Winslet and Leonardo DiCaprio on the Titanic, with a sign proclaiming "Brazil or Bust.")

Still: monkeys really did cross the Atlantic. Or, at least, that's what the current evidence tells us.

From the fossil record we know that monkeys originated in the Old World, but today there are many species in the New World--big, grunting howlers, lanky spider monkeys, acrobatic little marmosets, and many others, well over a hundred species in all. So the question is, how did the ancestors of these New World monkeys make it to the Americas? 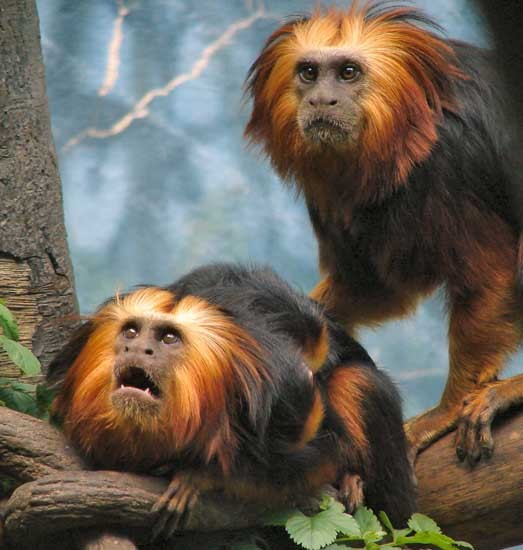 These golden-headed lion tamarins, and all other New World monkeys, apparently descended from an ancient primate species that crossed the Atlantic. Photo by Bjorn Christian Torrissen. Used under a Creative Commons license.

One possible answer, an answer that's been kicking around for decades, is that monkeys crossed an ancient land bridge from Siberia to Alaska. Then, over thousands or millions of monkey generations, they made the long trek southward through North America. This explanation sounds reasonable, but it doesn't jibe with the fossil record; although lots of North American primate fossils of the right age have been discovered, none of them are monkeys. So, the fossil record tells us that New World monkeys didn't come from the north.

The other obvious answer is based on one of the great events in Earth's history, an event that biologists often rely on to explain weird geographic distributions: the breakup of the ancient supercontinent of Gondwana. The idea here is that monkeys spread overland, one step or swing at a time, from the African part of Gondwana to the South American part. Then, as the Atlantic Ocean opened up and those two continents drifted apart, the monkeys simply went along for the ride. However, this "Gondwanan life-raft" explanation has a fatal flaw. Both the fossil record and "molecular clock" studies (which use genetic data to estimate the ages of groups) indicate that monkeys first evolved something like 50 million years after the opening of the Atlantic. In other words, monkeys couldn't have drifted with the wayward fragments of Gondwana, because there weren't any monkeys around to drift.

So what explanation is left? For the advocates of intelligent design, the answer is that the whole Darwinian worldview is a delusion: there are monkeys on both sides of the Atlantic because God created monkeys separately in the Old and New Worlds. That creationist argument, in fact, can explain any sort of odd geographic distribution. However, since my head is filled with a large collection of facts showing that all monkeys (and all other living things, for that matter) are connected by common descent, I'm forced to accept another explanation. If monkeys aren't products of divine creation, didn't take a circuitous route through Siberia and Alaska, and aren't ancient enough to have drifted with the continents, they must have made an improbable but not impossible voyage. They must have crossed the Atlantic Ocean from Africa to South America. And given when it happened--most likely between about 30 and 40 million years ago--their transoceanic journey must have taken them over an Atlantic that was already about a thousand miles wide.

I first heard about the oceangoing monkeys a decade ago, while working on the similar but less mind-boggling case of garter snakes crossing from "mainland" Mexico over the Sea of Cortés to Baja California. This snake example seemed perfectly reasonable to me, because the Sea of Cortés is only about a hundred miles wide and the garter snakes sometimes lived in brackish water, meaning they were halfway to being sea serpents. In contrast, my intuition, formed in part by various aquatic misadventures (a boat's broken motor that left me stranded on a small island in the St. Lawrence River comes to mind), made me somewhat skeptical of the idea that primates have crossed oceans. But since then, I've come across so many unexpected examples of overwater colonization, based on genetic and fossil evidence, that the monkey case no longer seems so bizarre.

For instance: Lizards have journeyed over the Atlantic, the Indian Ocean, and maybe even the Pacific. A carnivorous sundew plant made it from Australia to the top of a mesa in northern South America. Rodents, like monkeys, crossed the Atlantic. Even one of our closest relatives, the ancestor of the diminutive "hobbit" (Homo floresiensis), must have made a modest sea crossing to reach the Indonesian island of Flores. [For descriptions of these examples, see my book, The Monkey's Voyage, 2014, Basic Books, New York.] 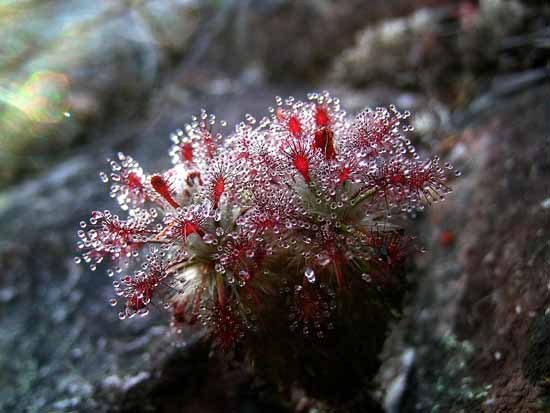 The ancestors of this carnivorous sundew made an improbable jump from Australia to South America. Photo by Fernando Rivadavia.

In fact, the science of biogeography--the study of the distributions of living things--has gone through a major sea change over the last twenty years. Odd cases that had been explained by continental drift or other processes that fracture distributions are now being chalked up to ocean crossings. The old story of Gondwanan life-rafts has been replaced, to a degree, by something resembling an airline route map, depicting the crisscrossing paths of species among far-flung landmasses.

Some of these chance colonizations have been mere blips in history. For instance, despite its newsworthiness, the hobbit of Flores is just an odd footnote in human evolution. However, other overseas colonizations have had great influence in the course of deep time. For example, the monkeys and two groups of rodents that traveled over water to South America gave rise to nearly 700 living species, from the familiar howler monkeys and marmosets to guinea pigs and capybaras (the world's largest rodents) to gopher-like tuco tucos and fish-eating rats.

Then there's the case of the ancient primates that traveled from Asia to Africa. According to Carnegie Museum paleontologist Chris Beard and his colleagues, the primate fossil record shows that this move happened some 40 to 60 million years ago, when Africa was an island, separated from Eurasia by the Tethys Sea. So, those Asian primates would have needed a natural raft--and a lot of luck--to reach Africa.

This case is still somewhat controversial, but let's assume that Beard is right. Then imagine what the world would be like if those ancient primates had failed to catch that raft, or if the raft had foundered in the ocean. That ancient, rafting species was the ancestor of baboons, macaques, and the monkeys that crossed the Atlantic. It was also the ancestor of gorillas, chimpanzees, and Homo floresiensis. And it was our ancestor. Erase that voyage across the Tethys from deep history and none of those lineages would exist. We would not exist.

Most of us, at one time or another, ponder how our lives have been changed by seemingly small, unpredictable events. For instance, the first substantive conversation I had with the woman who is now my wife and the mother of my children would never have happened if I had left my office a few seconds earlier or later on that particular day. Fate, you might call it, or just luck. Now contemplate the idea that the entire history of humanity, along with that of all other monkeys, came about through a similar chance occurrence--a group of ancient primates making an unlikely rafting journey across the Tethys Sea.

It's a beautiful illustration of a simple notion: strange things happen, things that one would never have predicted beforehand, and, sometimes, they change the world.

Science writer, biologist, and author of the book "The Monkey’s Voyage: How Improbable Journeys Shaped the History of Life"