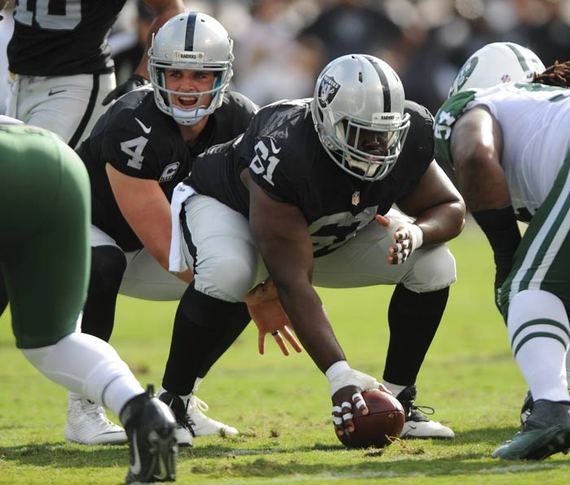 It's hard to believe this is the same team that lost ten games before their first win last season. The new and improved Raiders are now in contention in the AFC for the first time in twelve years. Oakland dominated the New York Jets early despite a late rally in the fourth. The Raiders walked away the 34-20 victory and their second straight win.

"I think we're getting better each week," said Oakland's head coach Jack Del Rio. "The process that we work so hard at, the coaches are doing a good job with the game plan and the players are coming in preparing to come out here to compete. That was a very good football team that we beat today. I'm proud of our effort."

It was a unusual first quarter for New York who lost their starting quarterback early. Ryan Fitzpatrick avoided a sack on opening drive and scrambled for the first down before being taken down by Charles Woodson. During that play Fitzpatrick tore his left thumb ligament and did not return until the final minutes of the fourth.

The Jets got on the scoreboard first when Nick Folk kicked a 40-yard field goal making it a 3-0 game. But the Raiders clapped back quickly. On their opening drive, Derek Carr's pass to Michael Crabtree was tipped by Demario Davis in traffic. Amari Cooper snatched it up for a 12-yard catch at Oakland's 48. Latavius Murray then rushed for 26 yards to setup the 5-yard touchdown from Carr to Andre Holmes in the end zone.

"I was happy to get the opportunities and happy I made plays out of those opportunities," Holmes said. "The first one was a fade, a play we work on. No one got a hand on me, and D.C. know where to put it." 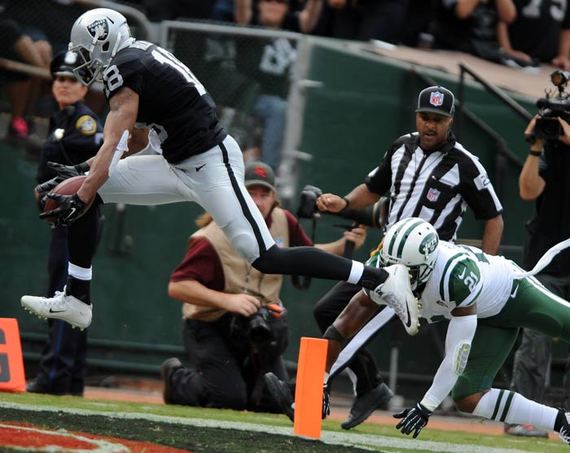 "We've got a lot of depth on this team, a lot of players that are capable of making plays at any time," said Jones. "You see Andre, every time he goes out there, he makes plays."

The first drive for the Raiders in the second quarter was unbelievable. Carr's pass to Crabtree was complete but what happened next was simply amazing. The wide receiver caught the pass and was immediately tackled by two defenders in the red zone. Crabtree managed to stay on his feet while tripping into the end zone for the 36-yard touchdown.

Carr later found Holmes for a 49-yard touchdown making it a 21-3 game in the second. He threw for 333 yards and four touchdowns dismantling New York's defense. Carr is the fifth Raiders quarterback with 300 yards, four touchdowns and no interceptions in a game, and the first since Rich Gannon (Sept 29, 2002 vs Ten.). 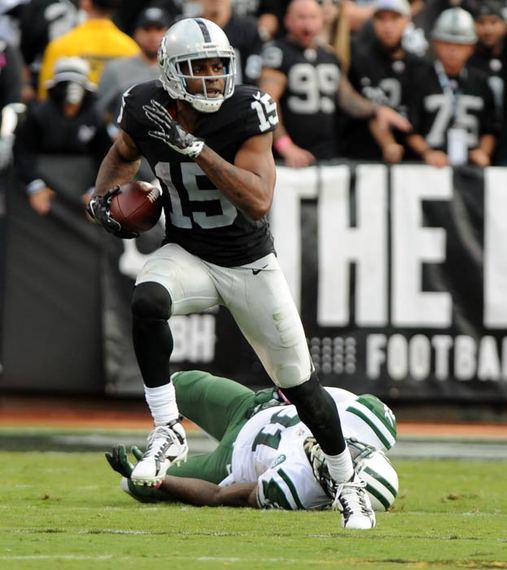 To add to the Jets misery, Geno Smith's pass intended for Brandon Marshall was picked off by Woodson at Oakland's 35 yard line. Woodson then led fans in a chant of "RAIDERS, RAIDERS!" Sebastian Janikowski missed the 52-yard field goal and Oakland could not capitalize off New York's turnover.

Woodson recorded his fifth interception of the year, the most as a Raider since his rookie campaign in 1998. He also recorded his 65th career interception, tying him with Ken Riley for fifth place on the all-time list. The Jets Folk kicked a 38-yard field goal before the half ended making it a 21-6 game. For the second straight week, the Raiders kicked no punts and had no turnovers in the first half. 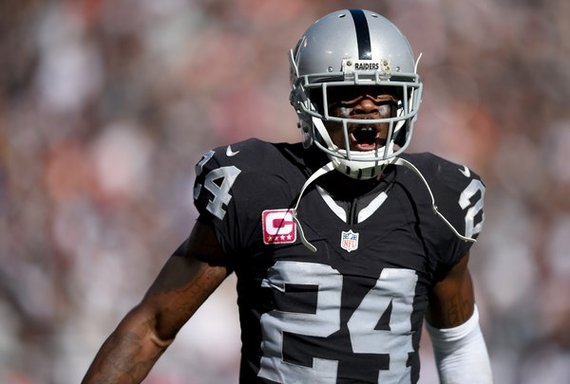 Oakland didn't cool off after the half, they came right back out and continued to dominate New York. Carr with his fourth touchdown threw a short pass to Jones who broke through multiple tackles while racing down the right-field for a 59-yard touchdown pass in the third.

Smith who threw for 265 yards and had two touchdown passes in his season debut. He connected with Eric Decker for the 4-yard touchdown pass making it a 28-13 game. But Janikowski got a second chance to kick a 52-yard field goal and this time he made it increasing the Raiders lead 31-13. By the fourth Oakland scored one last time on Janikowski's 47-yard field goal.

The Jets tried to rally late when Smith found Kellen Davis in the end zone for the 1-yard touchdown. While New York gained some momentum it wasn't enough to come back against a stout Raiders defense despite their lackluster performance in the fourth. Oakland successfully shutdown New York's running game. Chris Ivory was held to 17 yards on 15 carries and he usually averages more than 100 yards a game.

"We probably had something like over 20-something missed tackles," Antonio Comartie said. "That's something that we can't do. When you have the missed tackles, penalties and giving up long touchdowns, you're automatically going to lose that game."

This marks the fifth time in Woodson's career that he has been named the NFC or AFC Defensive Player of the Month. To go along with winning the award in September 2008, he won it a record three out of four times in 2009 (September, November and December). His five awards are tied for second most all-time, trailing only Hall of Famer DE Bruce Smith's six. Woodson also won the NFL Defensive Rookie of the Month in December of 1998.

Woodson becomes the ninth player in Raiders history to win the award and first since LB Kirk Morrison won it in September 2007. In total, a Raiders player has won AFC Offensive, Defensive or Special Teams Player of the Month 19 times.

On Oct. 4 against the Chicago Bears, he intercepted a pass late in the fourth quarter with the Raiders trailing, setting up a go-ahead field goal. The next week against Denver, Woodson intercepted Broncos QB Peyton Manning twice on the day, becoming the only player in NFL history with two interceptions in a game at age 39 or older. He is also one of only three players in league history with an interception at age 39 or older.