Except for those who keep tabs on Hollywood scuttlebutt, it will undoubtedly come as a stunning surprise to most that both the movie and the video game, Spear of Destiny, were derived from the same source. The film mesmerized a generation and was the forerunner of the action extravaganzas that still pack 'em in at the cineplex while the video game was the mother of all the 3D shoot 'em up fantasies that are almost more addictive to the male adolescent than drugs. What will certainly prove absolutely dumbfounding, however, is the fact that the story responsible for the technological breakthroughs in cinematic special effects and computer player wizardry is about a religious artifact which, for centuries, has been the attribute of a black saint.

As St. George still is for England, St. Mauritius / Maurizio / Moritz / Maurice / Moro had, for more than a millennium, been the soldier / saint / patron / protector of the Holy Roman Empire. The very epitome of the Knight in Shining Armor since the time of Charlemagne, he could undoubtedly prove as important to the black masculine psyche today as he once was to the European military establishment up until the 19th century. Both the lore and the religious cult of the historical figure who was martyred along with an entire legion of his compatriots in Switzerland rather than participate in the persecutions promulgated there by the emperor, Maximian, would undoubtedly prove an incomparable source of inspiration and empowerment to young 'urban' males for whom such idealistic black imagery has been absolutely inconceivable. 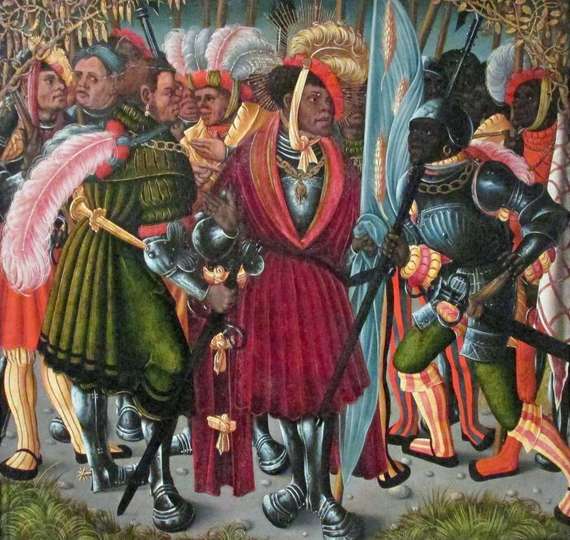 Goudstikker Collection, from the Greenwich Times

Even though he and his military attribute did not make the cut for an adventure flick, no doubt to avoid possible accusations of blasphemy resulting from such a crassly commercial association with so sacred a relic, early gamers and even skin heads knew that it was the Holy Lance, the one that pierced Christ's heart on Golgotha which had been the subject of Trevor Ravenscroft's 1973 bestseller, Spear of Destiny - the basis for the Lucas / Spielberg1981 blockbuster. 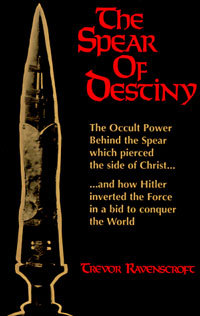 Since it was the blood and water from Christ's side in which Christianity was born, the lance had, by the 9th century, been relegated to Mauritius precisely because of his color. Indicating as it did his origins from the ends of the then know world, his complexion represented the totality of mankind for whom Christ had died. It was symbolic, as well, of his geographical affinity to the sun which, from time out of memory, had always been identified with the godhead. The apparent contradiction of the black African as emblematic of the very source of light, was itself seen as an allegory on the biblical admonition that God's ways are not our ways.

But there is a far earlier and all too obvious a reason why this saint is still virtually unknown today. With the involvement of most European nations in the slave trade, which of them would have tolerated, much less encouraged, the allegiance to a black African who had once been nothing less than the personification of the military might and the theological aspirations of once the greatest power in Western history. 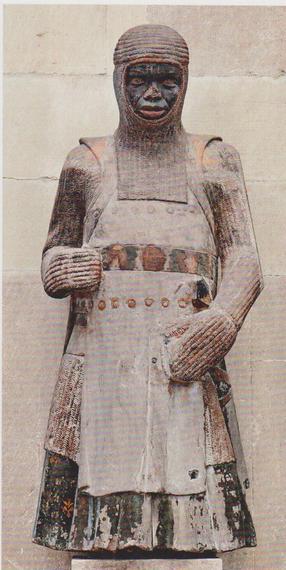 With the elevation of his cult to national status in the 10th century, the spear of St. Moritz became the scepter of the Holy Roman Emperors. It was at his altar in St. Peters in Rome that they were crowned by the Pope in all possible pomp and panoply and the almost deafening acclamation of the populace.

Because of the large number of both Sudanese and Senegalese troops in the Islamic armies of the 11th 12th and 13th centuries, it is not difficult to understand why the figure of St. Moritz would become such a dominant one during the Crusades. The myth of Prester John, the Christian Priest and King who ruled a land of milk and honey in Ethiopia and who, therefore, posed a threat to the rear flank of Islamic military power can be traced to this black soldier saint, too. His cult became the basis from which the age of chivalry sprang. To it can also be attributed the source for the various black heroes and heroines of the great medieval romances the objective of which was to translate into a more secular idiom, the Imperial dream of a Christian world power. 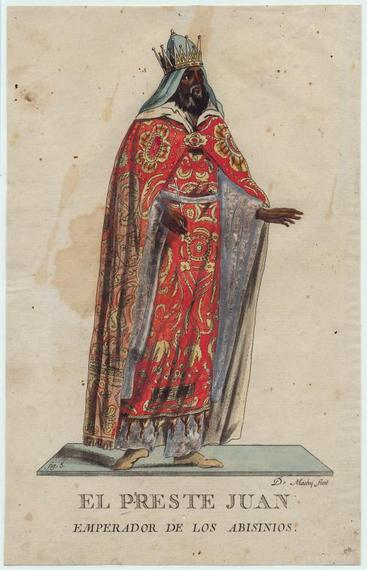 The character of Fierfitz in Parzival, the 13th century epic by the German poet, Wolfram von Eschenbach, is a case in point. The love child of a black Moorish Queen reminiscent of the Queen of Sheba, the female figure of Solomon's wisdom, he, like St. Moritz, is the knight par excellence, the very model of the chivalrous ideal for his younger all white half-brother, Parzival. Out of this need to both transform and redeem the image of the infidel would come another of the most important literary works of the period, "La Quest del Saint Graal." 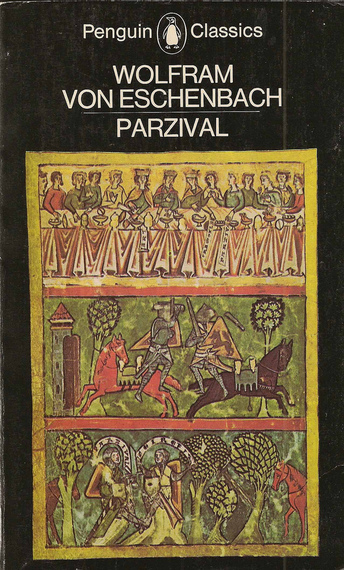 Although unknown to most, to scholars this mysterious talisman at its center which at times appears as the cup from the Last Supper and at others, the Mosaic tablets is a conflation of both Old and New Testament symbols; a metaphor of Christ as the fulfillment of the law. Long believed to have been hidden in Ethiopia, these tablets are what the African King, Evelach, bequeaths to his grandson who marries the sister of Joseph of Arimathea. From these two mythical figures, one black and the other white, descend the Grail Dynasty and such of its scions as Sir Lancelot and the knight without equal, Sir Galahad.

In his PBS series, "Man & Myth," Joseph Campbell claimed it was the divine injunction to bring justice to his subjects which Fierftz, the future Ethiopian ruler, Prester John, finds miraculously written around the rim of the Grail as he raises it to his lips, that is the first statement on the idea of legal justice for all ever made. True, the Magna Carta was written at about the same time as this once enormously popular saga but, according to Campbell's argument, it had been drafted by English barons for their own protection. And, as the National Archives and Records Administration here in the US have posted on their website, "The interests of the common man were hardly apparent in the minds of the men who brokered the agreement."

In celebration this year of the 35th anniversary of its release, just about every symphony orchestra in the world has been mounting live performances of the John Williams score along with screenings of the film.

What a great opportunity, therefore, to flag the almost incomprehensibly important black back story of this still unforgettable block buster to those who need it so desperately. The popular, high octane testosterone twist possible to the long forgotten and, indeed, suppressed story of once such a spiritually influential and politically powerful ideal of black manhood, offers us an educational opportunity of almost unimaginable potential.

September 22nd, is his feast day.