If you go to one of Raimund Hoghe's dance performances and just listen, eyes closed, you'll understand much of the story he's trying to tell. Hoghe is a master of the musical collage, shaping playlists of drama and scope, surprise and humor. In Pas de Deux, which he performed last week at Baryshnikov Arts Center, there is Strauss, and Peggy Lee, and Fred Astaire, and the entirety of Rhapsody in Blue. It's an aural feast.

Hoghe is also extraordinary to watch. A severe spinal curvature has twisted his small body into a helix. But he has said that he's not interested in "disability theater," and his unusual shape is only a part of what makes him fascinating onstage. He is a performer of quiet, dignified intensity, moving as if conducting some sacred but familiar ritual. The late Pina Bausch -- Hoghe was dramaturg at her Tanztheater Wuppertal in the '80s and '90s -- would approve.

Pas de Deux is in fact a dance for two, and Hoghe's partner is Takashi Ueno, a gifted Japanese artist. Lithe and classically trained, Ueno is the orthodox foil to Hoghe's unorthodoxy. Sometimes he's Hoghe's body proxy, navigating the trickier technical passages on Hoghe's behalf. (Hoghe started out as a writer, not a dancer, and came to choreography relatively late.) Sometimes Hoghe purposely draws attention to their differences, as when he has them both remove their shirts, inviting frank physical comparison. More frequently, though, the pair seem mystically connected, one person in two selves. 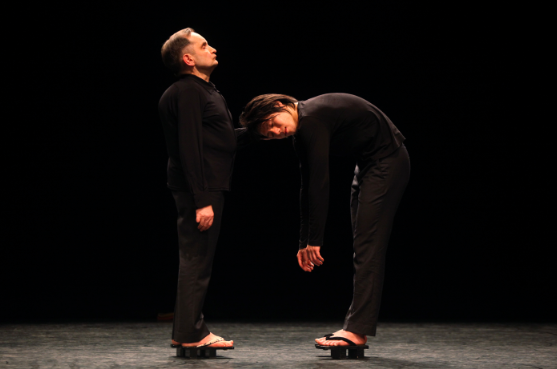 Pas de Deux's choreography meanders, its mood changing with each song. Some of its strongest moments riff on the traditional idea of the "dance for two": a fluid, spinning tango that Ueno performs alone, holding a white rose; a play on the ballet pas de deux, with Ueno periodically lifting Hoghe -- slow, extended elevations, beautiful and absurd and perfect. There's also a Japanese motif: They rope each other together with obis, carry paper umbrellas, wear platform geta sandals. Initially I thought that might be another illustration of the connection between Ueno and Hoghe -- these items are part of Ueno's culture, so they're part of Hoghe, too. But later on, a recorded narrative about Hiroshima and the horrors of radiation sickness pulls things in an unfortunate, and baffling, political direction.

At two hours with no intermission, Pas de Deux is an epic poem, and at times it feels oppressive. At the performance I saw, about a third of the audience walked out. (I also wish Hoghe had credited his musical sources. While I'm glad he isn't a writer of pretentious program notes, it would have been nice to read something about what we were hearing.)

But without that cumulative weight -- all those songs, all those thoughts, all those images -- Pas de Deux wouldn't tug at us so powerfully. As the lights finally fade to black, Hoghe and Ueno kneel, sliding two folded obis back and forth between them. It's as if they're exchanging souls -- souls we now feel we know. 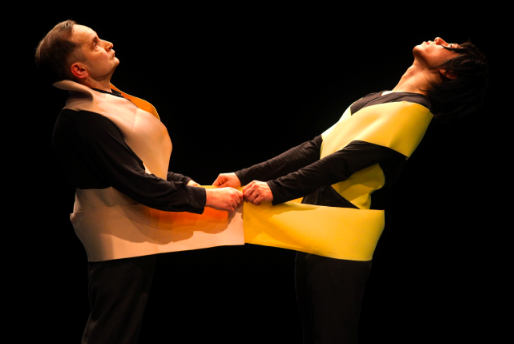 --------
A former dancer and choreographer, Margaret Fuhrer is an associate editor at "Dance Spirit" and "Pointe" magazines.