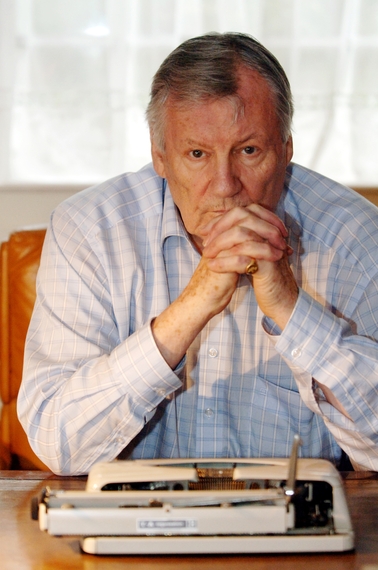 Jack Higgins is one of the best-selling authors of popular fiction in the world. He is often considered the architect of the modern thriller. His breakthrough novel, The Eagle Has Landed, written in 1975, sold more than 50 million copies. He's penned more than 83 novels which have sold over 150 million copies and have been translated into 55 languages.

Rain on the Dead, featuring the recurring hero Sean Dillon, finds Dillon in the crossfire of an Al Qaeda attack on a former American president. The assassination attempt is thwarted, but an elusive terrorist known as The Master is intent on obliterating his target. Dillon must stay a step ahead of the terrorist in a world where the rules of war have changed, and everyone can be marked for annihilation.

You've written more than 20 novels featuring Sean Dillon. What do you think is the secret of his appeal?
Robert Browning, the great Victorian poet, said, "Our interest's on the dangerous edge of things: the honest thief; the tender murderer; the superstitious atheist."

This sums up the style in which I write and about which the readers comment. Readers like my characterizations. Character is everything in a Jack Higgins novel. And you're never quite sure if somebody is totally good or bad. It's always a mixture of things.

Sean Dillon first appeared in Eye of the Storm in 1992 as an ex-IRA man who became a gun-for-hire. He was hired to blow up the English cabinet on behalf of Saddam Hussein during the first Gulf War. I think what happened was this: the public took Sean Dillon to their hearts. I realized I'd saved a character I'd intended to eliminate. However, my wife convinced me to keep him alive. Yes, he'd been a bad man, an assassin, but then, so was Richard III. (Laughter)

Before the book was published, on my wife's advice, I changed the last chapter of the book, so rather than die as happens to most bad guys, Sean Dillon vanished into the night. That was 21 Dillon books and four movies ago. I think allowing the character to be multi-dimensional -- good and bad -- made the difference for readers, and that's the basis for his appeal.

Jack Higgins is a literary pseudonym. Over the years you've used names such as Martin Fallon, Hugh Marlowe, James Graham and Jack Higgins. Why not your own name, Harry Patterson?
Using different names was part of one stage of my life. There was a lack of money. I'd been educating myself on the side, and trying to keep a family going. I knocked out relatively short thrillers, the kind of novels Chandler used to do. They had to fit into the very busy schedule of my life.

It was no use for me to be with a publisher who would publish only one book I'd written each year. Rather, I wanted a return on everything I wrote. That was where those different names came in. I was very driven to write, and couldn't get enough books turned out. Between 1959 and 1974, I published thirty-five novels, sometimes putting out three or four each year. I would write something very quickly -- usually in about eight weeks. My publisher told me the public wouldn't tolerate an author writing more than one book a year. So, I'd write another and we'd use a different name on it to see what would happen.

That's where James Graham came from. By the time I wrote The Wrath of God, I was teaching at James Graham College. The publisher rang me up and said, 'We love this book but we need a different name on it.' The only thing I could think of was James Graham, the college. So that was it.

The other pseudonyms derived similarly; they were names taken from various aspects of my life. Only later, when Jack Higgins became famous with the publication in 1975 of The Eagle Has Landed, did we reveal the identity of the author of the earlier books. And we stayed with that name, Jack Higgins.

Legend has it that in 1975, your life was transformed by a single telephone conversation. Will you tell us about that?
In 1975, I was talking on the telephone to a publisher in England, a very old-fashioned sort of fellow. He didn't take to the way I'd written The Eagle Has Landed. In that novel, I wrote a prologue to the novel in which I was walking through a little village church, looking for a certain character and discovering by chance, German soldiers buried there. It was a device I used to introduce the main story.

After the call, I put the phone down and went to check some papers. I then decided to make another phone call. When I picked up the telephone, I could hear the conversation going on at the publisher's end of the line. For some reason, the call hadn't disconnected. To my astonishment, the chap with whom I'd been speaking was commenting on my having written myself into the book's prologue. He said it was 'a load of rubbish.' He thought they should delete it and start the novel at a later point.

I was taken aback but said nothing. I simply spoke with my agent; we agreed I was dealing with a publisher who didn't see the true possibilities for the novel. That incident completely changed my mindset about dealing with publishers. I discovered I could be in the hands of people who weren't doing their best for me. As a result, I became much more involved in the publishing process, and began dealing more effectively with the London crowd. I then got a new agent, Ed Victor, who was always on my side. He was wonderful at analyzing things and helped my career enormously.

I've been told your desire to write was born partly out of your passion for literature, and partly to prove you could amount to something. Will you discuss that?
Harry Patterson, that's me, had a Scottish father whom I never knew. My mother left him after three months, and we moved to Belfast, the city where she had been raised.

We were very poor. I shared a room with my great grandfather, who was bedridden. I discovered I was able to read at age three. I would read the newspaper to the old boy. He had some books lying around. One of them was Oliver Twist. I remember picking it up and reading it, and although I didn't understand everything, I loved it. I discovered at a very early age that I just loved reading.

Keep in mind, for the first twelve years of my life, I was raised amidst the IRA turmoil. Life on the Belfast docks was rough. Guns and explosion were all part of my childhood. It was like growing up on a shooting range.

Because of poverty, life was very difficult. Eventually my mother remarried and we moved to Yorkshire, England. I went to a decent high school, but my step-father decided I ought to be working. He and other people in my early life didn't think I would amount to very much.

I started work at fifteen. I was a truck driver, a factory worker, and held many other jobs. In my spare time, I went to night school. I spent three years in the army as a non-commissioned officer. I discovered I had sharpshooting skills, and a very high IQ, when I got a look at my records. I realized I had some potential. I also saw that other people were financially far better off than we were. I didn't start college until I was twenty-seven years old, and after getting two degrees, became a college professor.

I became interested in writing as a boy, and entered a short-story competition in a local newspaper. Although I didn't win, I got a letter from a local author who said, 'I just want to say to you, you are a writer.' I never forgot that little exchange. I began writing novels in 1959, when I was thirty years old. I realized once I started writing, it kept flowing out of me.

I achieved a modicum of success after one novel was sold for film rights. After the sale, we bought a lovely Edwardian house. My wife and I had four children, and I was writing at night. But there was a problem: the typewriter could be heard throughout the house, and disturbed the children's sleep. I decided the best way to improve the situation was to not use a typewriter, but to write by hand. I'm still doing that to this day.

But yes, I felt I had to prove my self-worth, and thinking back on it all, writing novels was the way I could do it best.

If you could have dinner with any five people living or dead, from history or the world of literature, who would they be?
I've known some very fine actors. I was blessed by meeting and having dinner with Richard Burton. He would definitely be one guest. I particularly liked the actor, George Peppard. There was something very special about him. He could be both serious and humorous. I'd love to have Deborah Moore and her father, Roger Moore, to dinner He's a splendid actor, and was superb in the role of James Bond. I've immersed myself in Charles Dickens. I guess it relates to my childhood and having been a little boy reading Oliver Twist. Having read a biography about Dickens, I feel a deep affinity for him after reading about his early years, the poverty, and the rotten jobs he had as a youth and young man.

I think these people would make an excellent dinner group.

Congratulations of having penned Rain on the Dead, another Sean Dillon thriller sure to top the bestseller lists.