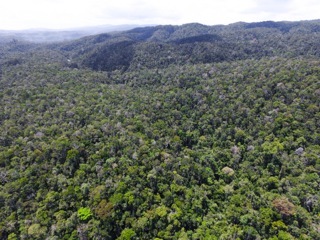 As climate negotiators in Paris struggle to agree on how to avoid the catastrophic consequences of global warming, a big part of the solution is hiding in plain sight: trees, specifically the trees of the rainforest. Conserving tropical rainforest isn't just about protecting spectacular wildlife and unparalleled biodiversity, though that's reason enough. Saving the rainforest is also the key to fighting global warming because of the trees' immense capacity to remove carbon dioxide from the atmosphere and store it within their trunks, branches, and underlying soil. While mankind has yet to devise an economical technology to capture and store carbon, millions of years of evolution have perfected trees to do just that. And the trees of the tropical rainforest, because of ideal, year-round growing conditions, are nature's gigantic carbon collectors.

What has to happen for the rainforest to be half of the solution to global warming? First, the world's remaining 3.9 billion acres of rainforest must be protected. For decades the rainforest has been destroyed at an alarming rate - currently about 80,000 acres per day. Annual rainforest destruction and degradation is responsible for 10% to 15% of current, human-caused carbon dioxide emissions. When the trees of the rainforest are destroyed, all that carbon that they've been storing is released into the atmosphere.

Many forests have not been totally destroyed but just degraded, often by selective logging of the largest trees. Vast areas of heavily degraded areas can recover and regrow, as long as the remaining trees are left alone. If these degraded rainforests were fully protected, each year they would absorb up to 30% of current annual fossil fuel emissions as the trees grow to maturity. And that CO2 absorption would start immediately and continue for decades as the forest recovers, naturally, without planting.

Several experts have concluded that the combined result of ending forest destruction AND allowing regrowth of degraded rainforest could offset as much as one third of total current carbon dioxide emissions. But the speed with which forest can be protected, versus the decades of industrial production capacity needed to convert to alternative energy, allows the net CO2 emissions reductions from forest conservation to accumulate more quickly in the near-term. As a result, as recently published in Nature Climate Change in a peer-reviewed commentary, tropical forest conservation and restoration could provide up to one-half of the global warming solution over the next several decades, by which time the level of carbon dioxide in the atmosphere could be decreasing. And expeditious tropical forest conservation could be the factor that holds warming to 2 degrees Celsius (3.6 degrees Fahrenheit) or less.

Of course, it is essential to replace fossil fuels with alternative energy promptly, as forest conservation cannot offset unabated fossil fuel use and burning of all remaining fossil fuel may doom much of the world's forest. But during the decades it takes to fully transition to clean energy, rainforest conservation is the natural, immediately available bridge to a post-fossil fuel world.

Of the world's 3.9 billion acres of remaining rainforest, about 1 billion acres are well protected, with a substantial contribution from decades of philanthropy. Individuals who want to make a meaningful contribution to fighting climate change can save acres of rainforest with non-governmental conservation organizations like Rainforest Trust. Those wishing to make a large commitment, and inspire others to act, can take the Million Acre Pledge. These are just two organizations, which I support and help lead, but there are many other groups that allow individuals to participate in saving rainforest.

In Paris this month, the governments of Germany, Norway and the United Kingdom together pledged to support rainforest conservation efforts with about $1 billion per year through 2020. While this is a great start, an amount of $10 billion or more per year is needed to fully protect the 3.9 billion acres of tropical rainforest remaining. This commitment level from the developed world is quite reasonable, given tropical forest's potential to decrease global warming. Conversion to alternatives to fossil fuels is also necessary and will cost trillions of dollars. Given the danger of run-away global warming to our economy, security, farmland and coastal areas, with a potential cost well into the trillions of dollars, the United States should be spending $5 billion or more of our annual $50 billion foreign aid budget to support rainforest conservation.

Governments and citizens of all countries must make the protection of the world's rainforest a top priority. It could get the world as far as halfway to a global warming solution over the crucial coming decades.