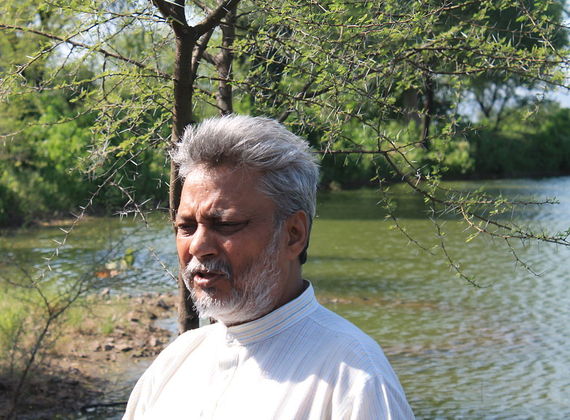 Rajendra Singh is a quiet revolutionary with a wry sense of humor. By empowering poor farmers, reviving traditional knowledge and building small rainwater ponds, the Indian activist has brought five rivers and a thousand villages back to life over the past 30 years. On August 26, Sweden's King Carl Gustav will present the highly reputed Stockholm Water Prize to the rainwater pioneer.

On October 2, 1985, Rajendra Singh, a young ayurvedic doctor, sold all his earthly possessions and traveled to the poor state of Rajasthan with a small group of friends. He started a medical practice in the village of Bhikampura but soon realized that the main problem of the local population was the lack of water. Decades of deforestation and mining had let the groundwater table dwindle. The local farmers had abandoned traditional methods of conserving water, and their modern bore wells quickly pushed the water table down further.

Rajendra Singh mobilized young people through his organization, Tarun Bharat Sangh, and started desiliting traditional rainwater tanks, or johads. He also engaged villagers in building small earthen check dams. When the monsoon arrived, the johads and check dams conserved the water, the water table began to recover, and dry wells started filling again. Once 375 check dams had been built, the Arvari River, which had remained dry for 60 years, started flowing again. In the meantime, the movement that Rajendra Singh initiated has built 8,600 johads, revived five rivers in Rajasthan and brought a thousand villages back to life.

Rajendra Singh, an old friend of International Rivers, is stubborn, patient and passionate. He has educated and empowered villagers throughout India with his walkathons and his water parliaments. He has also supported struggles to stop destructive dams such as the Loharinag Pala hydropower project and has brought his experiences into the World Commission on Dams process.

In the early years, Rajendra and his colleagues were repeatedly attacked by thugs and suffered severe repression. Meanwhile the rainwater pioneer has found wide recognition in India and around the world.

At a time of climate change, decentralized water management methods are becoming ever more important to cope with intensifying droughts and floods. "Due to the harvesting of rain and recharging groundwater, there is no scope for drought or floods in our area," comments Rajendra Singh. "This work of ours is a way to solve both floods and droughts globally."

While India's rainwater pioneer has gained a lot of respect, his bottom-up approach is still ignored and dismissed by powerful mainstream institutions. Since 2003, the World Bank has argued that "the easy and cheap options for mobilizing water resources had mostly been exploited" and that countries like India needed to return to building large dams. Rajendra Singh's life work proves that the opposite is true.

"Mr Singh is a beacon of hope", said Torgny Holmgren, the Executive Director of the Stockholm International Water Institute, when he announced the award of the Stockholm Water Prize today. "He has literally brought villages back to life. We need to take Mr Singh's lessons and actions to heart if we are to achieve sustainable water use in our lifetime."