A thick and fetid coating of slick mud covers most of the streets in Port-au-Prince. Last night (June 6) it rained for the sixth night in a row. While it is too soon to confirm, last night's rain caused at least twenty-three deaths. At the same time, the rains uncovered other festering inequalities. 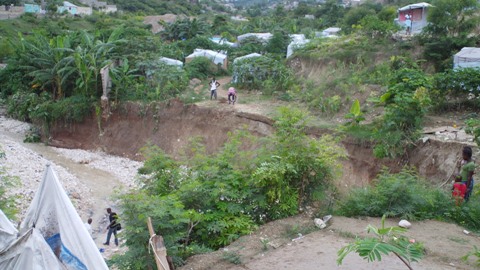 Nowhere is this fear more pronounced than in Haiti's internally displaced people (IDP) camps, where many still live under tents and tarps because they have no alternatives. The rain is adding fuel to an open flame of cholera, which has already claimed 5300 lives. Health experts are registering an increase in cholera cases; in Carrefour, for example, the cholera clinic saw an average of 300 per day this past week, when it had been 300 cases per week.

Last night residents of Carradeux were completely cut off from the outside world, as the rainwater and mud were waist-deep. Carradeux is a prime example of several structural failures within the international aid promised since Haiti's earthquake almost a year and a half ago.

On April 22, 2010, Catholic Relief Services began the relocation process of IDPs from well-heeled private high school Camp St. Louis de Gonzague to new site in Carradeux now referred by the IDPs as St. Louis Displaced. The division of aid distribution between this camp and the camps that were originally present was immediately apparent. Water, latrines, child-friendly spaces, lights and other aid were immediately available to the St. Louis Displaced but only provided for adjacent camps several months later, and some never received anything at all. 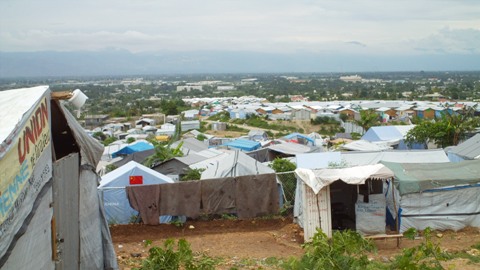 Photo: Mark Snyder, June 7, 2011. Divisions between two adjacent camps, Carradeux. The NGO-managed camp received T-shelters while there are no plans for the same for the camp in the foreground.

In February 2011, a six foot high chain-link fence was erected between St. Louis Displaced and the five other camps. Due to lack of communication between OCHA, humanitarian actors, and the IDPs, rumors of further eviction pass through the original camps and continue to this day.

In March 2011, construction of transitional shelter (T-Shelter) began for the St. Louis Displaced. Despite months of formal requests to humanitarian actors, neighboring Camp Toussaint Louverture still does not have water. The pit latrines installed months prior collapsed leaving a large open hole to the fecal matter. The committee lobbied the humanitarian community and Haitian Government for seven months to have this repaired before action was finally taken. The latrines are now gone and rushing rainwater threatens to spread the feces across the camp.

The chain-link fence is a constant reminder to the IDPs on the other side of the inequalities in aid distribution. The T-shelters given to St. Louis Displaced are constructed of wood, plywood, and corrugated metal roofs. Their floors are concrete, and they have doors that can be closed and locked to provide security to the families inside. Without T-shelters, security for the families remains highly precarious. Only torn plastic tarps separate them from the heavy rains, tropical sun, criminal activity, and other daily threats. 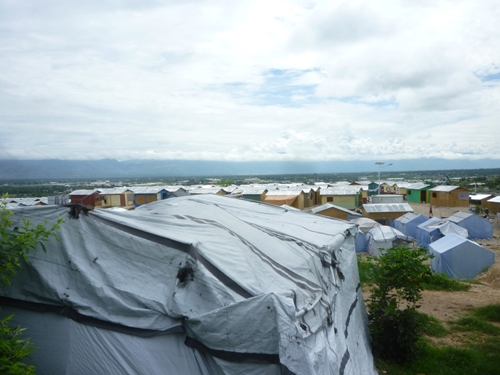 Photo: Mark Snyder, June 7, 2011. Condition of a typical emergency shelter 17 months after the earthquake. Carradeux camp, not managed by NGO. The NGO-managed camp with T-shelters is in the background.

The five camps outside the fence were told they are not in the original agreement with the landowner and so will remain under the ripped tarps and makeshift shelters they have been in for the past seventeen months. The nongovernmental organization (NGO) working in the "outside" camps' objective for these camps is to "help all selected beneficiaries to find an alternative shelter solution that will allow them to leave the camp for improved living conditions." They plan to move families back to their own property and provide T-shelters or repair damaged houses. But according to this NGO, only 7.5% of families in the four camps where they work own land and will benefit from this program. All others must fend for themselves without any other viable option but to remain in uncertainty, insecurity, and within an unjust situation.

The situation in Carradeux, while extreme, is far from unique. A year following the earthquake, three months after the cholera epidemic, a random sample of 108 IDP camps showed a minimum of progress since mid-summer: 37.6 percent instead of 40.5 percent still were without water, and 25.8 instead of 30.3 percent of camps still did not have a toilet. The gap between the 'haves' and 'have nots' is widening; camps with NGO management agencies are twice as likely to have life-saving services, yet only one in five camps is managed by an NGO. This private, patchwork approach is keeping progress to a minimum. The progress was concentrated in Cité Soleil because of a coordinated process meeting in local government offices led by the Haitian government -- not the U.N., IOM, or NGOs.

Despite billions in aid being given, NGOs' efforts, and even some remarkable individual successes, what accounts for this collective failure? First, donor policies and the huge infusion of cash have corrupted NGOs. Policies like the "results" or "performance" based management have had the effect of centralizing decision-making authority and closing off avenues for meaningful local participation. Rather than an open, participative, democratic process, NGOs are increasingly rewarded for a "bean counting" approach that reduces people to statistics. Corrections and changes made from on-the-ground experience are increasingly difficult.

These Byzantine reporting requirements also cut off intra-NGO communication. Staff who work "in the field" and who are the direct points of contact with aid recipients are increasingly removed from decision-making authority. Local needs deliberation has become increasingly irrelevant, as NGOs have to do exactly what they promised donors in line with donor priorities, or risk their funding being pulled. Since the earthquake these barriers have become more pronounced, as often field staff do not speak English and management do not speak Haitian Creole.

The reward structure actively discourages local participation, open lines of communication with aid recipients and within the office, and collaboration and coordination with the State or other NGOs. The reporting and other requirements imposed by donors re-orient NGOs to be more concerned with accountability from above, not from below. If an NGO fails a community, the community has no recourse. They have no direct contact with the donors or even NGO directors. At the base, NGOs cannot be compelled to work better, or work in under-serviced areas, because they are first and foremost private voluntary initiatives. Thus, any NGO can point to individual successes post-earthquake meanwhile close to 40 percent of camps still lack water. This is also why such visible barriers between the "haves" and "have nots" in Carradeux are only increasing.

Since donors' relationships with NGOs trump others through ever-powerful reporting and management regimes, there is little incentive to work together. NGOs are structurally speaking competitors with one another and even the Haitian government itself. Why share information or coordinate amongst one another with an entity that is competing for the same resources? Often these relationships erupt in hostilities, but is it any surprise that given this, and donors' systematic undermining of the State's oversight/ coordination capacity, only a fraction of NGOs in Haiti even bother to submit the bare minimum, annual reports, to the Haitian government? In many cases, donors' policies actually encourage NGOs to disregard the authority of the State. NGOs pay employees pay up to three times more than the equivalent government ministry.

An alternative would be a Haitian government at least equipped to manage the NGO caseload. Only the Haitian government has the structural responsibility to all Haitian citizens including IDPs. Whether all program funds go through well-performing ministries or simply enough for oversight and evaluation, a public health and citizen protection program requires a responsible, funded, government with the capacity to do its job of coordination and follow through.

The rapid spread of cholera, facilitated by persistent gaping holes in the coverage of WASH services to Haiti's most vulnerable, is a highly visible sign that the pendulum has swung too far towards NGOs. The failure to adequately respond is a logical consequence of the erosion of public capacity and the lack of public accountability, coordination, and collaboration of private NGOs. Reports spanning the mid-1980s to 2009 and the political spectrum uniformly argue that NGOs must coordinate with the Haitian government, which must set the framework and play a coordination/ oversight role. To fulfill even this minimal role of oversight and supervision requires a minimum of qualified technicians and support staff, propositions that run counter to a growing hostility towards public employees within donor countries, certainly the U.S.

Like the roads, closing this gap and stopping the floods of mud and cholera require more than patchwork.