I must admit that the Fourth of July holds a very special place in my heart, having nothing to do with the Declaration of Independence or The Stars and Stripes. It was a 4th of July weekend in 1975 that my high school held its 10th year reunion.

In June 1975, after a year's separation, six years of marriage and two children, my husband and I got an amicable, but painful, divorce. Having decided to move back to my hometown, I flew up to Cincinnati to find an apartment and attend my reunion.

Thoughts of high school reunions evoke a lot of emotions -- dread, excitement, curiosity and apprehension. Going back to my 10th reunion single (and finally thin) only heightened my anticipation. Would Arnold Rosenberg still be nerdy and funny? Would Jill Paxton still be beautiful and charming? Would there be anybody for me to date?

As it turned out, Arnold was still nerdy and funny. Jill was still beautiful and charming and I did find someone to date.

A white suit ... a tanned face ... massive shoulders ... startling blue eyes ... I'll never forget the moment I saw him nor my reaction: "Whatever happened to the creepy little kid from Bond Hill Elementary School?" I screeched. He smiled shyly. 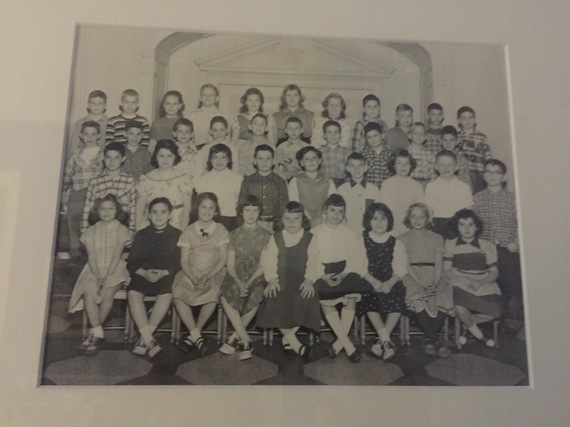 His name was Steven. We'd gone all through grade school and high school together -- never associating with the same crowd -- never exchanging more than a hurried "hello" or a banal "How Are You?" Being surrounded by my high school cronies that night, I naturally regressed to high school behavior. My stomach fluttered. My laugh was high pitched. My words came out silly. I turned on the charm and flirted outrageously. When we parted later that evening, he asked me to call him when I moved back. I did.

By October, we were dating steadily. By March, we were discussing marriage. By August, we had "tied the knot."

Steven acquired two sons and a wife. I acquired a cat, a Corvette I didn't know how to drive and a chance to have the kind of marriage of which I had always dreamed.

Over the next few years, we bought a house, gave my sons Harry and Frank a brother, Max, (born three years to the day of our 10th reunion) and began trying to function as a cohesive family unit.

By the time Sam and Louie were born, Steven was acclimated to parenting both "ours" and "mine" in a more harmonious mode and I was acclimated to being less defensive and territorial over which child said what to whom. I was beginning to really believe -- on my good days -- that blended families can work and that children of divorce can be emotionally healthy and well-adjusted.

Although my story will warm the hearts of people who would still like to believe in Santa Claus, living happily ever after and the pot of gold at the end of the rainbow, I must admit that there were plenty of bad days too. There were days when I felt Santa Claus got wedged in the chimney, living happily ever after was a neurotic and unattainable myth and that if the pot of gold did exist, it was buried under piles of hurt feelings, angry resentments and dirty laundry.

There were days when the continual refrain of "I hate you-you aren't my real brother" from one of the little ones to one of the older ones was an often uncomfortable reminder that blended families have additional issues to resolve. We all learned quickly that angry and hurt feelings can't be smoothed over, but need to be acknowledged and explored.

The "Post-Tampa Blues" was a syndrome we dealt with for years: the older boys would come back every summer regaling the younger boys with tantalizing and glowing reports of their summer with their Dad. Then sullenly and reluctantly, they would greet Steven and me, who would soon be dealing with their rebellion against homework, healthy meals, bedtime curfews, our sanitary and nutritional standards and the realization that summer was over.

And if we were sometimes beaten down by the less-than-exemplary attitudes displayed by the children, our own attitudes often became discouraged and sour. Days would pass without me catching a glimpse of Steven's sunny smile.

One morning Steven came back from driving Frank to the airport to catch a flight to Tampa. He had a heartbroken, sad look on his face.

"What's the matter?" I demanded.

He glanced at me disdainfully and replied. "I'm tired, I'm cold, and I'm speeding down the freeway at 6 a.m. so Frank won't miss his plane, and he turns to me and says, 'Pop, do you know what the best part of my vacation is? It's the very first moment I step off the plane and see my Daddy'."

Brutal honesty is "for the birds." Step-parenting hurts.

But if we often felt we were dealt a rough hand, lowering our expectations helped. Talking, analyzing, and re-hashing helped, and the sheer passage of time helped. Developing a sense of humor and dwelling on the positive always seemed, in retrospect, to relieve some of the pain that divided loyalties can inflict.

Steven and I are better in-laws and grandparents today because we have already learned to share holidays, familiarize ourselves with other customs and different values, and encourage our children to freely love others as well as ourselves. When we finally let go of the tight "nuclear family" concept we had envisioned and embraced the idea of an extended family network, things more readily fell into place.

I didn't realize how well until I heard the following tale:

A mutual friend asked my ex-husband why he wanted to take Steven and me to dinner while we were visiting in Tampa and why he was even interested in maintaining a relationship with us. My ex-husband answered simply, "Because our sons are brothers. What better reason is there?"

The years have passed. The children have left the nest. Some have married. Some have not. Grandchildren grace our doorstep, as do the challenges of aging knees, weaker backs and muddled minds. Nevertheless, Steven is back to gently smiling and I'm eagerly looking forward to us attending our 50th high school reunion this fall. I wonder if Arnold Rosenberg is still nerdy and funny and if Jill Paxton is still beautiful and charming.

The Luckiest Weekend Of My Life -- 4th Of July, 1975
Celebrity Empty Nesters