When Alexander Payne stepped off the boat in late July to arrive on the Greek isle of Patmos, few locals recognized a major Hollywood writer-director in their midst -- or had a chance to see his films on the silver screen.

But the Omaha-born filmmaker of Greek descent, known for his wry dramatic comedies (About Schmidt, Sideways, The Descendants), came to support a weeklong celebration of cinema in an unlikely corner of the world.

Thanks to the labors of a small circle of young, enterprising Greeks living in Athens and abroad, the third International Film Festival of Patmos was held the last week of July on this tiny Aegean isle.

Festival organizers have faced Homeric odds: trying to organize an annual film fest in the midst of Greece's epic economic struggles on an island that does not even have a cinema to screen movies.

Nevertheless, over eight days the festival screened a dozen recognized feature films from the past year, together with 11 documentaries and 50 short films.

Patmos is a small but renowned Greek isle just off the coast of Turkey. I have traveled here over a dozen times since my wife and I came for our honeymoon in 1987. The island seems to exercise a mysterious "law of return" among those willing to make the extended voyage to get here (the island has no airport).

The island is home to the Cave of the Apocalypse where St. John lived in banished exile in 95AD, experiencing wild dreams and hearing a voice speaking the revelations to him as recorded in the New Testament. Black-robed Orthodox priests stroll past sun-seeking tourists on this so-called Jerusalem of the Aegean. 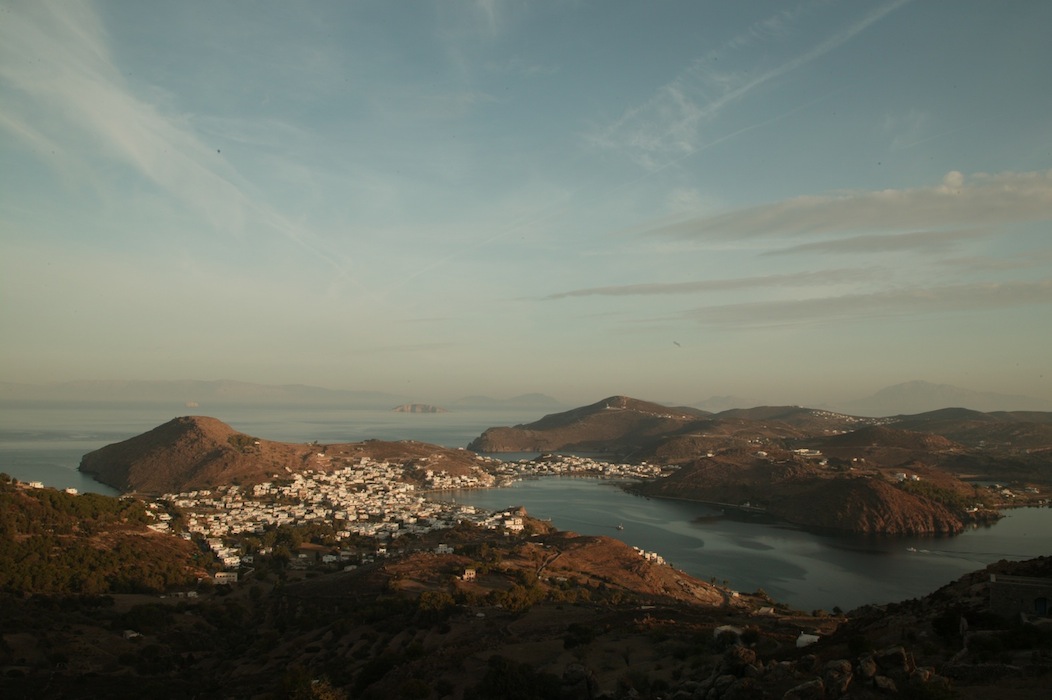 This holy rock has a special appeal among writers, poets, painters, and other artists seeking quiet beauty faraway from the madding crowd of package tours and all-night discos.

"Patmos is full of filmmaker friends, and we could discuss our films but could never see them on a big screen" says Babis Tsoutsas, the festival's director and a film producer living in Athens. Before launching the festival in 2010, he and his filmmaker circle gathered in the white-walled village of Chora that crowns the island with its 11th century monastery, quietly watching on laptops the films they made in the winter.

Greece has an internationally recognized film festival in the mainland city of Thessaloniki. However, it's hard to beat the magical charms of sitting under the stars in an open air cinema on a small Greek isle.

Back home where I live in San Francisco, you can find a film festival or two every month celebrating various nationalities, faiths or genres: Arab, Asian American, Buddhist, Black, Greek, Green, Irish, Italian, Jewish, Lesbian and Gay, Noir and Silent Film. Drive north of the city, and find that nearly every town from Sausalito, Tiburon and Mill Valley to Sebastopol, Napa and Sonoma has their own annual film fest to offer.

Film festivals offer cinema lovers an antidote to the mall megaplex experience of Hollywood blockbusters. It is a place to rub shoulders with filmmakers, celebrate independent feature and documentary films, and discover gems of cinema from across the globe.

Unlike most other festivals, Patmos film screenings and seminars are offered free of charge to encourage locals to attend. Festival organizers hustled to line up sponsorships and in-kind support, chipped-in their own funds, and also raised $33,000 from an online Kickstarter campaign.

On the opening night screening of Before Midnight, over 400 islanders and tourists filled the makeshift outdoor theater in the spacious courtyard of the elementary school of Skala, the port town of Patmos. 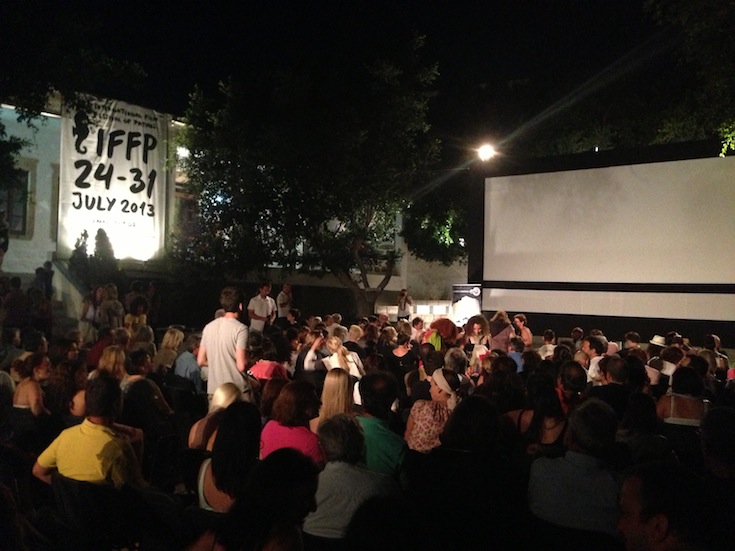 The film was an appropriate if not challenging choice. Richard Linklater's work, the third in a series, was shot this time in Greece, following the talky romance between Jesse (Ethan Hawke) and Celine (Julie Delpy). The indie favorite exposes the compromises and battles of marriage.

The opening scene at the Athens airport captured the current state of Greece: Ethan Hawkes' face is filled with deep-creased anxiety, signaling doubt if this couple will make it through to the next day.

Early in the film, we watch the couple enter a small Byzantine chapel filled with ancient frescoes. Hawke promptly lifts up Delpy's top to kiss her bare breast. An uneasy quiet passes through the island audience.

The scene points to how festival organizers face the challenge of serving both the cinema-savvy international visitors to the island and more circumspect Patmians curious to gaze at the big screen.

"Since the locals are not exposed to cinema, we cannot have only art house favorites," says Steve Krikis, the festival's artistic director and a New York-based commercial director who spends his summers on Patmos. "Some people here have never been to the cinema. So we have to go slowly."

While the festival has screened films from all over the world, the economic collapse and social turmoil of Greece has been a constant theme since its launch.

"We would love to have more films and content centered around the crisis," says co-founder Tsoutsas. "But it's been four years of too much crying and shouting about the crisis. So this year we said, "Let's make this festival a celebration of freedom" --freedom of choice, thought, and speech -- especially since we lost the Greek national TV station this year."

International feature films highlighted stories of people overcoming oppressive situations and challenges. This included Bhen Zeitlin's celebrated Beasts of the Southern Wild and Pablo Larrian's film No that reconstructed the voting out of the Pinochet regime in Chile.

"This actually is the way we want to fight the crisis. Not by crying about it, but showing positive messages and solutions," Tsoutsas says with a gentle smile.

In Little Land, I learned about how a growing number of young jobless Greeks (youth unemployment stands at a staggering 60%) are moving to the countryside and remote islands to live off the land like their ancestors. The documentary follows an unemployed computer geek from Athens who ventures to Ikaria, a neighboring island of Patmos noted for the hard work and incredible longevity of its inhabitants.

Alongside screening movies, festival organizers want the annual event to be a meeting place for international filmmakers to meet, talk and collaborate on projects. They also hope that more filmmakers will choose to bring their productions to Greece.

"We want to offer a co-production forum where some producers, sales agents and financiers can come and discuss and pitch projects, in a more laid back environment than Berlin or Venice," says Krikris.

"I will make a film in Greece at some point, relatively soon in my life," Alexander Payne told a master class held at the Aktis Hotel overlooking the sweeping bay of Grikos. "It's a nice way to contribute as a member of the Greek diaspora." 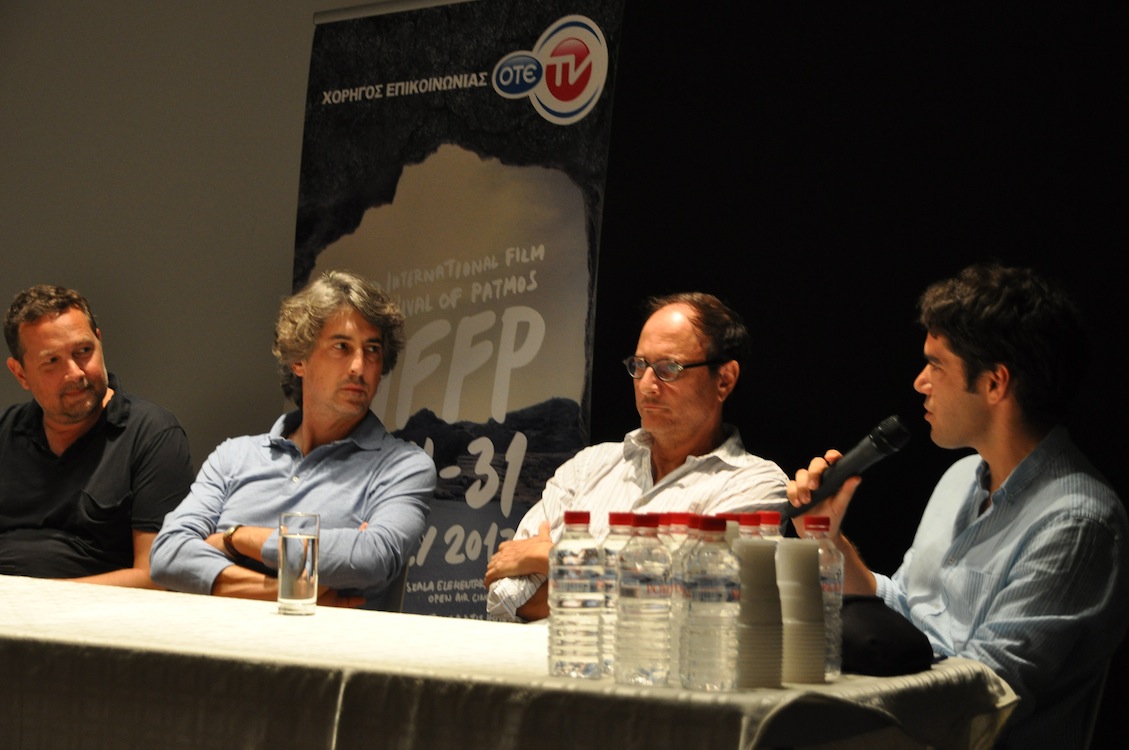 Payne was joined by Phedon Papamichael, the noted Greek-born cinematographer who has shot Payne's last four films, including the upcoming Nebraska. Arriving fresh off of filming George Clooney's latest picture The Monuments Men in Europe, Papamichael was pleased to discover a new festival in his homeland.

"This seems like the perfect situation for a film festival," says Papamichael, who seeks out innovative small festivals in the U.S. and Europe. "There are so many things to offer here on this island. It has its Greek charm and flair. I think it's going to go on to attract interesting films and filmmakers."

The allure of Patmos has drawn a surprising number of Hollywood actors seeking its splendid isolation. Johnny Depp, Julia Roberts, John Malkovich, among others, have been spotted here the past few years. Locals whisper that Tom Hanks is building a house on a secluded side of the island.

"We are interested to make this a filmmakers festival," says Tsoutsas when asked if he might lure such Hollywood royalty to the festival. "We are not so much interested to bring starlets."

Festival organizers sought to also document and share the stories of local Patmians, artists, monks, philosophers and internationals living on the island. They pulled together young Greek filmmakers in a workshop titled "Life in the Borderlands" that will result in a feature length documentary composed of eight personal profiles of lives on Patmos.

At the end of the festival, I wondered what it would feel like growing up without ever sitting down in a dark movie theater and seeing new worlds on a big screen. Even in a country like Greece, land of great myths, epic poetry, and renowned storytellers.

After many years of visiting and making local friends on Patmos, I realize that living here means not spending too much time imagining the lives of others as much as living your own. There is indeed no shortage of drama, joy, tears, laughter, anger and longing here.

An island like Patmos has its own rich history, stories and characters to celebrate. Life is lived outside. At late night tavernas, people gather to tell, animate and exchange their own dramas.

But now for one week in July, imagination is stretched, and inspiration sparked, by films flickering across the evening sky.

Writer and Social Entrepreneur on Politics, Film and Civil Society