My daughter wants to ride in a white limo and make a million dollars. On a four-way play-date, Carmen and her big sister cue up girl-pop and invent a dance routine to Taylor Swift. They chat on imaginary cell phones and strut around the yoga studio, pouting: "You're on the phone with your girlfriend, she's upset..." A little hip shimmy, a little hair shake, catch hands and spin. They want to perform the show, they want me to film them, they want me to send the video to relatives across the country... Look at us, look what we did. 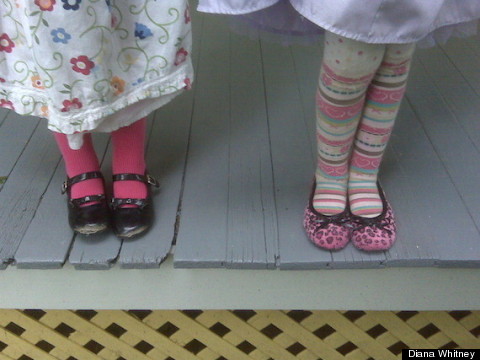 I regret the day she was home sick from kindergarten, and she snuggled on my lap while we browsed YouTube. I was bored, looking for distraction, a quick window out of the domestic world, and we came across Taylor Swift crooning "Love Story" in a cleavage-enhancing Renaissance gown, blonde hair flowing from her tiara, stealing away to the forest to meet a dark-eyed Romeo in pantaloons. We already knew Taylor's songs from the radio, but Carmen was entranced at first sight. Now she says she wants to be a rock star when she grows up. She wants to drive a silver Jaguar from Vermont to L.A. Yes, the kid plays in the mud and makes maple syrup with her dad, but I'm troubled by her professed ambition. Carmen is a wild Leo with a quick temper, endlessly curious, easily bored. Her exuberance lights up the house and her rages darken it. She learns the Swedish synth-pop hit "I Love it" in gym class, and begs me to blast it at home. Then she loops the track on repeat while she choreographs a creative solo wearing only her underwear -- not little-girl panties but sassy boy-shorts hugging her cute round bum. I love watching her. She crisscrosses her arms, runs and kicks off the wall, face rapt with concentration. But something unnerves me in the passionate way she rolls around on the floor. Maybe it's time I solidify the blurred lines between adult- and child-appropriate material in our house.

Yes, we have a dance pole in the playroom, but the thing is now part of the furniture, evolved far from its origins. The girls monkey-climb it to the ceiling then slide down like firemen. They build elaborate sheet and pillow forts anchored around its vertical line. They chase each other in wild circles and jump from the pole to the couch like flying squirrels. Back when I was first married, I stumbled across a book on pole dancing and ordered one on a whim. I screwed it into a pine beam in our living room, taught myself the Half-Pint, the Ballerina, the Descending Angel, practicing in front of a mirror. Tim wasn't interested. The Red Sox were finally in the Playoffs and Big Papi parking a grand slam into left compelled him more than his wife trying out pole tricks. When I got pregnant a few months later I kept dancing, but before long my belly got in the way and I felt self-conscious with the pole even when I was alone. I worried that my passion would expose me as foolish; my big body's gestures seemed absurd, not sensual. So when we moved we packed up the pole and stored it in the attic, along with the six-inch Lucite stilettos I'd once attempted to dance in. I never got the hang of them. Those shoes are still up there somewhere, hidden like dangerous weapons, out of context in our Victorian farmhouse as two alien stun-guns.

"I never dance anymore," I lamented in the kitchen, milk-stained, making Bunny Noodles for breakfast. I'd found myself deep in the Baby Cave -- a nursling and a toddler clung to me at all hours and I harbored nostalgia for my unfettered past. Tim called my bluff and lugged the dance pole down through the attic trapdoor. He drilled a hole into the playroom ceiling and screwed the thing in, rooting the base firmly into the orange Berber rug. "Go to town, honey," he said, and initially I did, on a few nights after the babies were asleep. But slowly the pole became invisible. Now there's too much crap underfoot -- LEGOs, crayons, blocks, and bunnies, cracker crumbs and string cheese wrappers, the tiny pieces of board games. How can I dance amidst my kids' teeming mess? I can't let go of my motherly duties, can't snake a leg around the pole and push off spinning into the Half-Pint, hair flying, when the weight of domesticity presses all around me along with the relentless urge to clean up. "Sex isn't something you do... It's someplace you go," says couples therapist Esther Perel. As parents, I think we need to discover an erotic world in our house that remains separate from the children. The girls have no trouble entering their imaginary realms -- any place, any time of day. They play Animal Olympics in the playroom, Orphans in the sumac grove, Spies on the trampoline. But sometimes they need to seek privacy. 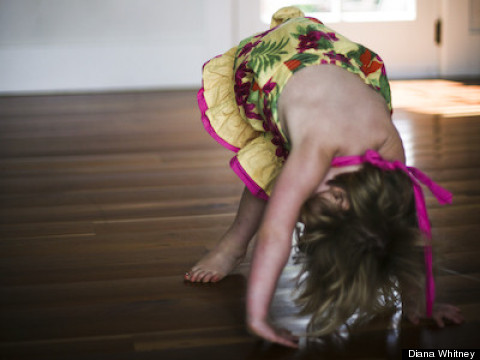 One Saturday afternoon Carmen and her friend Summer, a petite and fearless figure skater with a pixie cut and gap-toothed grin, disappeared in the house with suspicious quiet. Tim happened upon them in the guest room, where they'd erected the pink pop-up princess tent in a corner and were engaged in a game of "wrestling" inside it. Hushed calm broken by grunting. When Tim opened the pink Velcro flap, Summer was shirtless and Carmen pants-less. He cheerfully told them it was time to get dressed and go play outside, and when I came home we debriefed the incident.

"It's fine, it's normal," I reassured him. "I used to explore with my friend Alice at first grade sleepovers. We grew out of it." I don't know if he was comforted by this confession. We agreed that we didn't want to shame Carmen in any way -- as long as the wrestling match had been mutual, there wasn't a problem. When I sheepishly told Summer's mom what the girls had gotten up to, she wasn't surprised. "They were probably kissing," she said. "I have to keep an eye on Summer at playdates so I know exactly what's going on." At bedtime I queried Carmen for details about the wrestling, but she refused to talk. As usual she regressed into toddlerhood when she cuddled in our bed, chomping on her Ducky's beak, feigning sleep, eyelashes fluttering. I laid a hand on her warm belly and launched into a little speech about intimacy. "Our bodies are very special and precious," I said. "We get to decide who touches them, especially our private parts." No answer. "Was wrestling a fun game?" A shrug. "Did Summer have fun too?" "Yeah, " Carmen finally said, opening her eyes. "She was smiling and happy." At this I grinned inwardly, envisioning the sweet curiosity of the little girls in the tent. Alice and I knew what we were doing was private, which made it all the more thrilling. Behind the closed door in her room under the eaves, we traded off who was boy and who was girl, active and passive, venturing forth tentatively on the vast ocean of experience. But a dark current of shame ran close beneath the surface; I can feel its ugly shadow even now. It's what I most want to prevent for my daughters. I can't trace the distinction between natural self-expression and dangerous precocity. Some days I boogie with Carmen after school, blowing off steam and playing chase to Katy Perry. I pick my girl up and swing her fast, tip her upside down as she laughs crazily, gets damp and sweaty, collapses on the floor. And some nights on the full moon, I zip up my black velvet hot-shorts and turn on Prince alone in the yoga studio, dimming the lights, wishing that old silver dance pole were nearby. For now it has to be enough to rock out to a few songs while the house is asleep, catch my reflection unmoored in the windowpanes. Once I watched my own mother dance in a diner in the sleepy town of Eaglesmere, Pennsylvania, where we took a weekend trip with friends. The grown-ups put the Rolling Stones on the jukebox and "Under My Thumb" blasted into the empty restaurant. We kids sat in a vinyl booth and drank malted milkshakes while our parents ignored us, my young mom in her Peter Tosh tee-shirt and cut-off jeans, her long red braid swinging down her back. A private expression on her face I now recognize as pleasure. I was transfixed by this stranger, by the life force running through her. I rarely glimpsed her again. 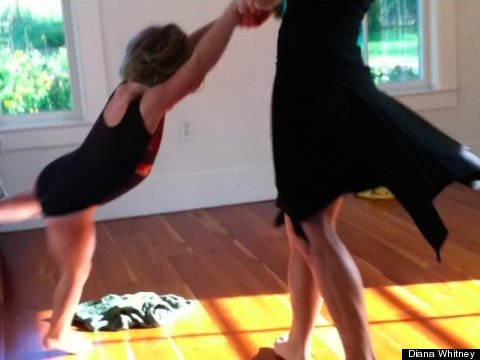 Note: Names have been changed.