I grew up the daughter of a feminist. Mom was always involved with local association of women chapters and always made sure I knew that girls could do ANYTHING.

I went to an all-girls school for grades 8, 9 and 10. Those were prime years for defining a sense of self. I was surrounded by teachers and staff that were empowering. I never once had a moment in my life where I paused and thought, "I can't ____ because I am a girl."

When I found out that I was going to have a son, I was so surprised. A boy? What?

Immediately, I had visions of this super-aggressive and dominant child. Isn't that what they are? They are The Man. They are the ones oppressing women. And now I was going to have to parent one. No opportunity to continue the "girl power" culture that I loved so much.

But a funny thing happened when I met my son -- I started to realize how destructive girl power can be to boys.

Let me be clear -- I absolutely know that there is a need to make sure that girls and women know that what is between their legs should not limit them to achieve anything that their heart is guiding them towards.

But here is what I sadly realized: Within modern girl power, there seems to be a message that girls are better than boys. Boys are BAD. Boys are MEAN. Boys are silly, weak, stupid, clueless, rough.

There are also a lot of double standards when it comes to proclaiming, "girls can do anything!" I have seen parents celebrate that their daughters play with trucks or pick out boxers as underpants. Look! See! Nothing holding this girl back!

This sort of celebration does not happen when a boy picks up a doll or Dora undies.

The modern princess culture seems to be that you can wear a pink dress and still climb a tree. You can love to dance and twirl and still play baseball. You can wear a crown and overalls. I think this message is fine. And I agree with it. Kids -- you can do it all!

Except the point isn't "kids, you can do it all," it is GIRLS can.

I have a son who lives within the princess culture. He has fallen in love with pink skirts. He likes to serve tea. He has been in awe of the transformative effects of makeup. He likes to have dolls drive his firetrucks. He most certainly has a meltdown when he sees that there are Dora pullups for girls but not for boys. (If the pullups didn't have special absorption locations for front wee wees as opposed to middle wee wees, I would absolutely get him Dora pants.) 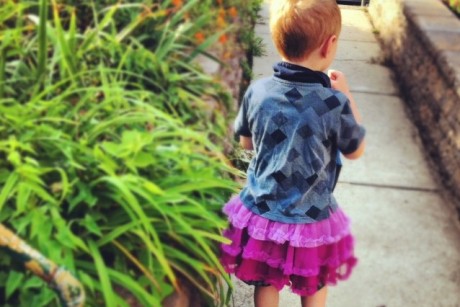 W loves music and rhythm, running around the track at school, reading stories to his animals, and being FIRST.

He watches each episode multiple (MULTIPLE) times to the point that he can recite most of the dialogue. A week ago, he snuggled into me and proclaimed, "boys are not nice." I asked him which boy and he told me ALL boys. All boys are not nice. They are mean.

He was right. In almost every "girl triumphs" story there is a slew of "mean boys." Or there are boys that have to be told to be kind.

Disney Jr has an "I am a Princess" video that they play before and after the "Sofia" episodes. After the fifth viewing of this video, W let me know that boys cannot be princesses. I told him that he was right -- princess is a title for girls and prince is a title for boys. I looped it into a familiar talk we have about how "mom" is usually for a woman parent and "dad" is usually for a man parent.

W proclaimed himself a prince and continued watching his show.

The "I am a Princess" video aired again and he stood up and got close to the TV. He started shaking his head. He told me, "I don't see a prince! Why can't they play too?"

I flubbed something incredibly absurd and said they were probably there -- they were just getting a snack! Or MAYBE they are filming the princesses twirl and then they will take turns.

I am curious what other parents of sons feel about girl power. Does it still have a place? Is there still a need?

WATCH: I Am a Princess