WASHINGTON -- Listening to Republicans on the campaign trail or the House floor, one might think the quickest way to eliminate the deficit is to make Americans who earn the least pay more in taxes. "Part of the problem is today only 53 percent pay any federal income tax at all; 47 percent pay nothing,” Rep. Michele Bachmann (R-Minn.) told a crowd in South Carolina, repeating a conservative meme. "We need to broaden the base so that everybody pays something, even if it’s a dollar."

Beyond Bachmann, the idea has been spread by Republicans from Texas Gov. Rick Perry, Florida Sen. Marco Rubio and former Utah Gov. Jon Huntsman to members of the House and Senate leadership. It was brought up again in Wednesday's GOP presidential debate by other candidates.

"Daily Show" host Jon Stewart recently zinged the GOP for its relentless focus on the poor, noting that even if the government took absolutely everything the bottom 50 percent owned, it would still raise only about $700 billion (never mind the starvation that would result).

But that's wealth. What about income? What if the government taxed those who Republicans say are getting off scot-free at the rate of 50 percent of all they earned and disallowed deductions? How much would that raise?

Using data from the Internal Revenue Service compiled by the Tax Foundation, a HuffPost analysis found that if the bottom 50 percent of Americans (those earning less than $33,048 a year) had their gross income taxed at a flat rate of 50 percent, the government would net around $537 billion. However, taxing the top 1 percent (earning $380,354 or more) at the same 50 percent rate would rake in about $843 billion. 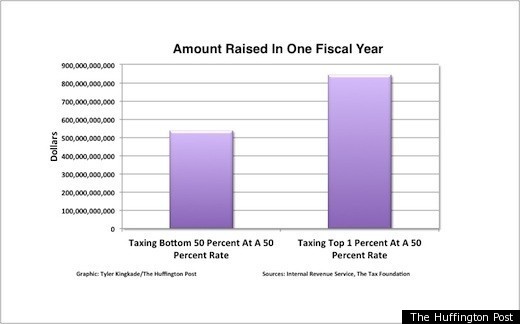 The gross income figures in this analysis include capital gains -- more likely to be a source of income for the top 1 percent -- which are currently taxed at lower rates than income. Of course, no one is seriously pushing the idea of taxing the richest 1.4 million Americans at a 50 percent rate.

This analysis also uses a 50 percent flat tax, rather than the current progressive tax rates. The flat tax is another idea championed by conservatives and Republican presidential candidates. Even at the lower flat tax rate that conservatives propose -- 17 to 20 percent usually -- the money raised from the bottom 50 percent of Americans would still pale in comparison with how much the top 1 percent would pay in total. Yet such a rate would represent a significant tax increase on the bottom 50 percent, in some instances doubling their burden, while cutting taxes on the wealthy almost in half.

The suggestion to return to the Clinton-era top marginal rates on the richest Americans alone would send an addition $72 billion pouring into federal coffers annually, according to Citizens for Tax Justice.

To see the wealth gap from another perspective, consider that the net worth of the bottom 60 percent of all U.S. households, roughly 100 million households, is lower than that of the Forbes 400 richest Americans -- an analysis confirmed by various economists for PolitiFact.

Further, the amount raised over 10 years by increasing tax rates on the top 2 percent of Americans to the rates that prevailed in the Clinton era would be greater than half the net worth of the bottom 60 percent of U.S. households. Ending the Bush tax cuts for those households earning more than $250,000 would add almost $830 billion to U.S. coffers over 10 years, after factoring in the cost to finance the debt.

The Tax Policy Center said the Bush tax cuts, which lowered the top tax bracket from 39 to 35 percent, have cost the United States more than $2.3 trillion since they were enacted. The Center on Budget and Policy Priorities has shown that the Bush tax cuts, if extended, would become the largest contributor to the deficit within a decade.

And, of course, the argument that half of Americans aren't paying federal income tax ignores a host of other levies, including federal payroll taxes, as well as various state taxes the poor cannot escape -- such as income, sales, property and gas taxes -- which are actually paid at a similar rate across all income levels.