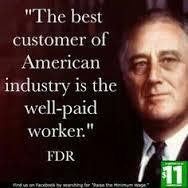 The need to raise the minimum wage to a living wage should be a primary topic of discussion in every freshman economics class because living wages are necessary for the creation and sustainability of the middle class that every student wants to join upon graduation. This simple logic surrounds micro economics of the individual as well as the macro-economics of our capitalist system. Our ability to buy things we produce regenerates the economic cycle which fuels the engine of progress and increases societal wealth.

A $7,25 per hour employee can't even buy the basics of life and therefore must be subsidized with government grants which throws an additional burden on taxpayers. In too many cases, this adds to budget deficits. Regardless of budget considerations, these "grants" to individuals should have been spent to improve public utilities and transportation infrastructure.

Government subsidies provided to these underpaid workers forms a funnel that transfers wealth to the stockholders of the companies that underpay the workers. This is corporate welfare. This is a primary reason the Walmart Corporation and the Walton family is rich beyond reason and it's why Senator Bernie Sanders talks despairingly about their business model. If this type of corporate welfare had never existed, America would be a very different and certainly a more equitable Country.

It's been said that "a rising tide lifts all boats" and it certainly true for wages. If a living minimum wage of $15 per hour is paid to workers, those individuals earning an industrial wage of $24 per hour or more will be better off too because they will be relieved of the taxes that supported the underpaid workers which again, actually subsidizes the wealth creation of corporate welfare class. Also, the workers now earning the higher minimum wage will be more likely to spend some money on the products produced by the labor of the higher skilled industrial worker.
As a result, more total wealth is generated in the nation's economy and the lives of everyone involved is improved.

This will go a long way toward restoring 'THE AMERICAN DREAM"