Yellow Cake: A simple sweet dessert confection that gets its signature color from eight egg yolks and a cup of butter, and is great with either vanilla or chocolate icing.

Yellowcake: A type of uranium concentrate powder obtained from leach solutions in an intermediate step in the processing of uranium ores. Also, it's radioactive. Also, Colin Powell showed off a vial of it at the United Nations to sell the Iraq invasion in 2003 to that body and the world. 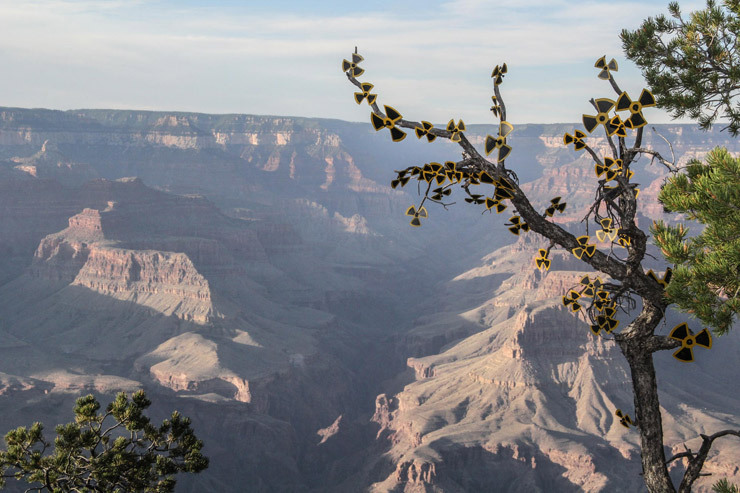 Being more knowledgeable about the dessert variety of yellow cake than the desert variety of uranium contamination, we turn to street artists Jetsonorama and Icy & Sot to educate us about the active uranium mines that are at the North Rim of the Grand Canyon. The three worked jointly in June to create new public works addressing the topic and we have each of them here for you to see.

"The issue of uranium contamination and nuclear waste is timely as there is an active uranium mine at the North Rim of the Grand Canyon presently and a proposal to start mining at the South Rim," explains Jetsonorama (Chip Thomas), who is a local artist, a practicing doctor, and a social activist advocating for the people who live on the reservation and the natural environment in general. 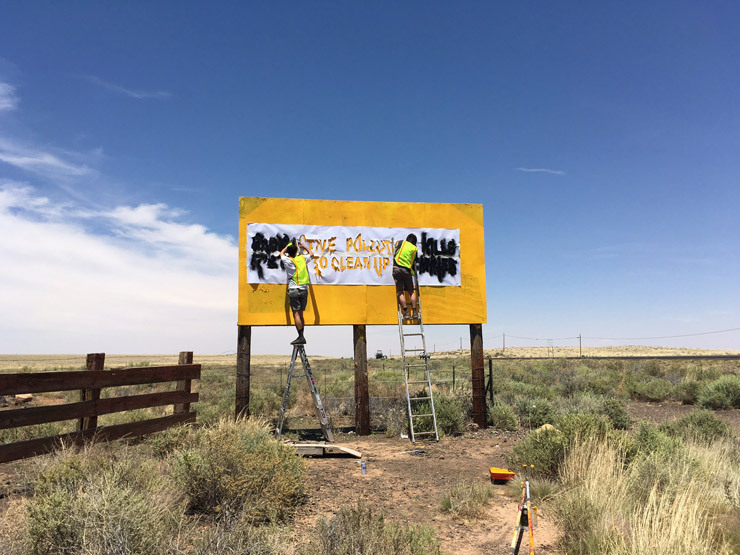 For the last few summers Thomas has been hosting "The Painted Desert Project", a selection of national and international street artists to create works in this region that respond to the communities, history, and geography of this part of Arizona and the Navajo Nation.

It would appear that the introduction of such contamination into communities, national monuments like the Grand Canyon, or local water supplies -- whether by design or negligence -- would be considered a provocative act by any rational person. So too is this series of art interventions by Icy & Sot meant to be provocative. The brothers, for example, attached the "Radioactive" symbol onto the branches of a tree overlooking the canyon to dramatize the integral effect that such poisoning is having on natural elements. 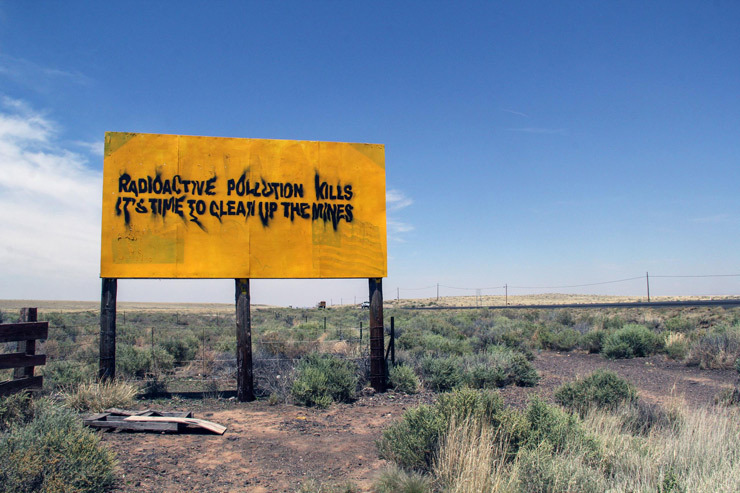 In two video performances recorded onsite in the desert the visuals are much stronger, including a typical consumer floor fan you could pick up at the local Best Buy store that is blowing radioactivity freely in the same way that desert winds are carrying radioactive dusts from many sites across the land.

The second performance sees a jump-suited figure unceremoniously dumping a Yellow Cake, presumably made of yellowcake, upside down onto an American flag that is draped across a card table in the open desert - leaving a messy affair that is not easily cleaned up - and then walking away. 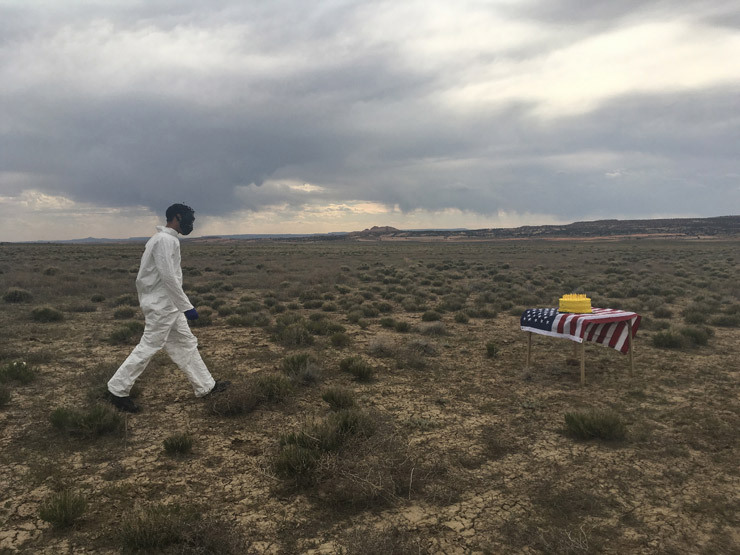 "There are over 500 abandoned uranium mines on The Navajo Reservation and more than 80% of the mine sites have not been cleaned up," says Sot when describing the issues they are addressing with their new works. "There are currently no federal laws that require clean up of these hazardous sites and they continue to pose significant danger to the Navajo people."

"In a region with an unemployment rate around 50% investment by private industry is hampered by not being able to build around these contaminated lands," says Jetsonorama, "While Icy & Sot chose largely ephemeral installations to dramatize the situation of uranium contamination, I chose installations focusing on the subtle, insidious effect of living, working, playing on contaminated land."

A statement accompanying the video:

"Yellowcake is a product of uranium mining. Many Navajo people worked at the mines, often living and raising families in close proximity; they were unknowingly exposed to dangerous levels of radiation and chemicals. Uranium mining and yellowcake processing continues today and threatens the environment and the health of communities across the U.S." -Icy & Sot 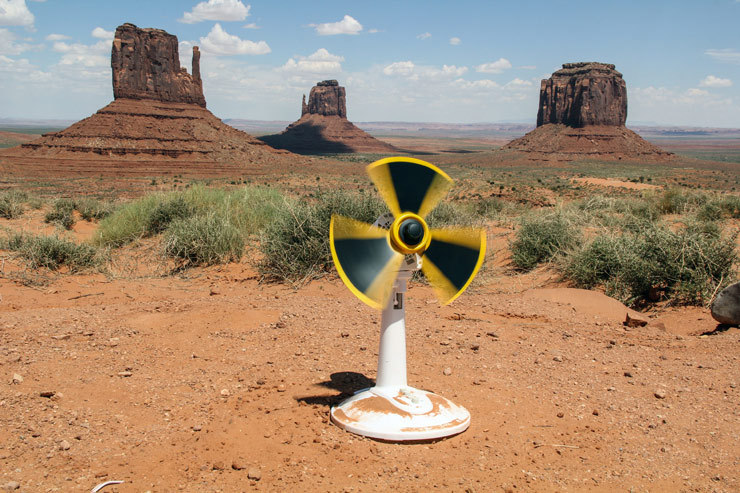 "Toxic radioactive particles left over from abandoned uranium mines on Navajo land take the form of dust which travels with the wind for hundreds of miles. It can be inhaled or blow into streams or onto nearby ground spreading radioactive contamination." Icy & Sot 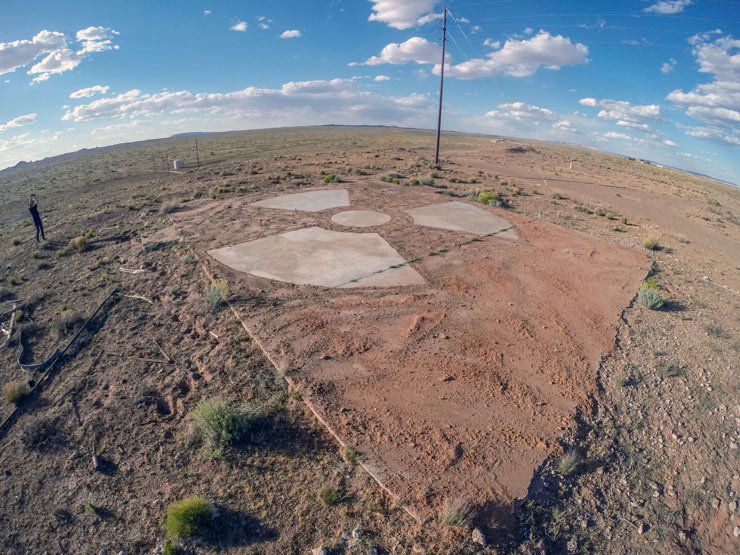 Icy & Sot. "Contaminated Land" references the drinking water supplies of the western U.S., much of which is fed through the Colorado River. Navajo Nation. Arizona. June 2016. (photo © Icy & Sot)

Using a more subtle approach to the topics at hand, you'll see Jetsonorama's photographic image of "radioactive" green sheep, an image of girl on a home-made swing, and a local guy named Jamison feeding his dog on contaminated land that he says is "near AUM." The artist explains that AUM stands for Abandoned Uranium Mines and then shows us a link to a map that contains record of 521 such sites scattered across the land in this region.

We noted previously in an article about Jetsonorama's work that the New York Times did a story about this area in 2012 entitled "Uranium Mines Dot Navajo Land, Neglected and Still Perilous," but very little appears to have changed as a result of it. Says Jetsonorama, "There are still over 500 abandoned uranium mines on the reservation spewing alpha, beta and gamma radiation contaminating land, water, animals and humans." 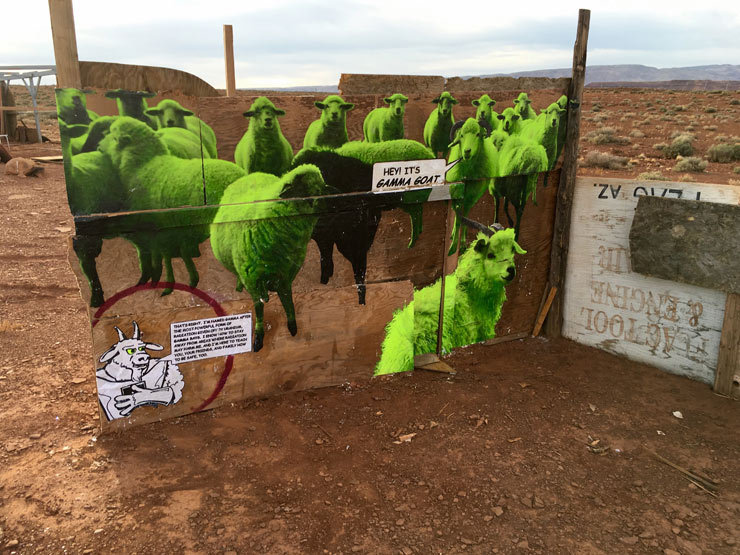 In describing their various stencil works and installations in the area, Icy & Sot told us they were struck by the lack of knowledge of the local community who in danger of being exposed to these deadly and sickening man-made disasters.

"The Navajo people did not have a word for radioactivity and did not know about the dangers of radiation in the 1940s when mining companies began surveying their land," they said in a statement. "Today the mines are closed but their toxic legacy persist in contaminated soil and drinking water with elevated levels of radiation." 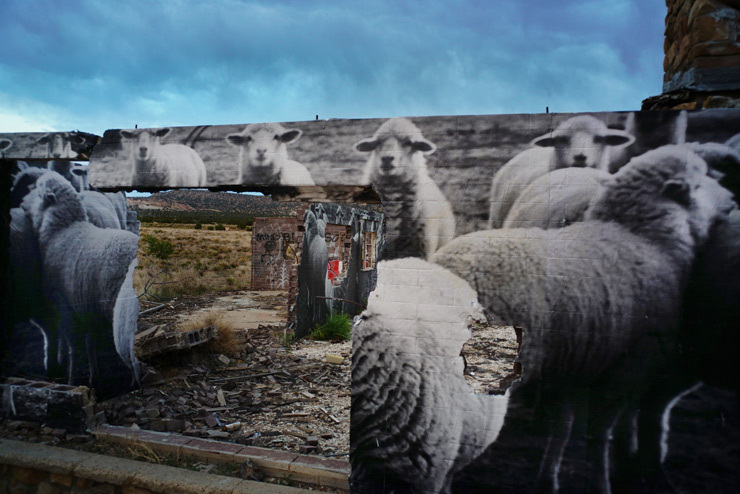 The government has created an education program aimed at kid wandering or playing near such radiation sites, including a new cartoon character named "Gamma Goat". It may capture the imagination of a youth and deter them from inadvertently exposing themselves to this multitude of sites, many poorly marked and not guarded or sufficiently protected.

"There is an insightful documentary on uranium contamination on the Navajo nation by a young Navajo woman called 'Yellow Fever' which refers to the illness uranium workers would get that is characterized by flu-like symptoms," Jetsonorama tells us. "In the film the filmmaker talks of recent efforts by the EPA to educate children living on the reservation to the dangers of uranium exposure. To this end the EPA developed a comic book/coloring book the protagonist of which is called "Gamma Goat" who warns kids to stay away from abandoned mine sites." 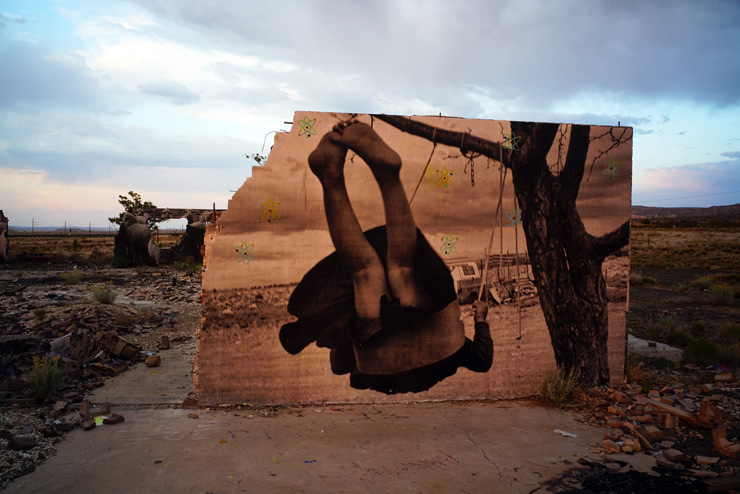 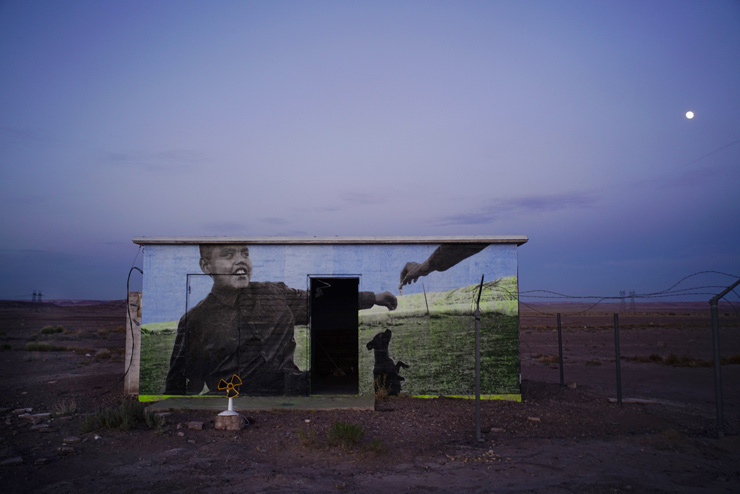 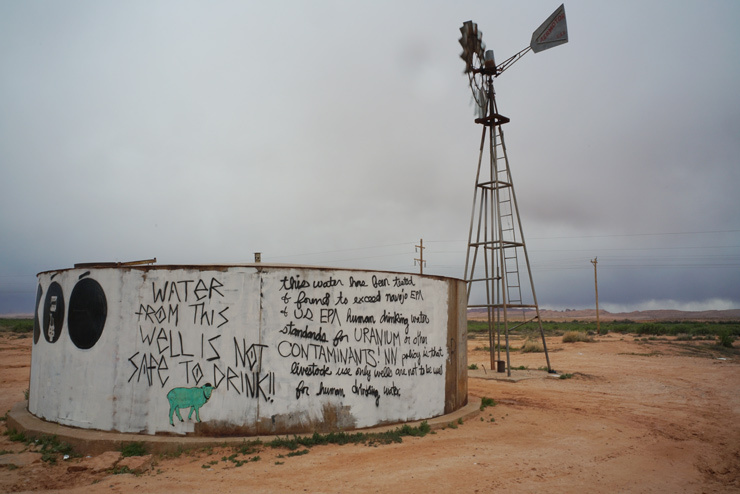 Artist Unknown. A water well that someone has warn neighbors they should not draw from. Navajo Nation. Arizona. June 2016. (photo © Jetsonorama) Thank you to Chip Thomas AKA Jetsonorama and Icy & Sot for sharing with us their photos and videos and for helping us describe the project for BSA readers.