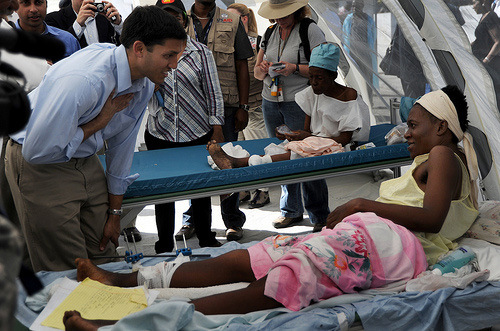 In October 2009, Raj Shah walked across the reception area into my office and closed the door. He told me that President Obama and Secretary Clinton wanted to nominate him to lead the US Agency for International Development (USAID).

The decision wasn't so easy.

Raj had a great job. He had just started four months earlier as Under Secretary of the US Department of Agriculture. Working under the incredibly smart, strategic and effective leader, Secretary Tom Vilsack, Raj was partnering with him to forge new approaches to domestic and international hunger and food security.

He wondered out loud,

"What if the critics were right -- maybe it wasn't possible to succeed at USAID?"

There was plenty of reason to expect that the critics might be right. Many Republicans were not fans of USAID. As far back as 1995, Senator Jesse Helms had introduced legislation to abolish the Agency. And some current members weren't much happier. Senator Leahy, the leading Democratic supporter, sent a shot over the bow in early 2010 opening a budget hearing by saying that unless the Agency significantly changed, they could not count on his support the following year. These rumblings and frustrations were well known even among friends of USAID -- showing up in think tank reports and best selling books.

This shaky political support rested on top of an American public who understood little about foreign assistance and were deeply skeptical. Understandably, people were worried about their own jobs, homes and health as pink slips, foreclosure notices and healthcare insurance cancellations were showing up daily in mailboxes nationwide. Americans when queried, thought foreign assistance made up 25 percent of the federal budget rather than less than 1 percent that it did. Most thought that cutting it in half would solve our budget problems.

Raj had seen first hand the impact of the generosity and skill of the US people abroad. Raj's parents, with their small kids in tow, had periodically made the journey halfway around the world to their birthplace in India. Janardan Shah, Raj's dad -- a Michigan engineer at Ford Motor Company -- and his mom, Rena -- a preschool teacher - wanted their children to see the struggle and poverty in the world. On one of those trips, Raj would never forget the day he saw a busy hospital that had been built by USAID decades earlier -- it became the blueprint for his professional training as a physician, career and life.

Realizing global isolation had never worked and we couldn't solve all the problems threatening us with just a military response. Raj decided that October day in 2009, that USAID's mission was too important not to try. He believed in the Agency and its people. He said yes.

Within weeks of his swearing-in, on January 12th, Raj was in the USAID Top Security room preparing for a meeting at the White House on Afghanistan when a note was passed to him that a 7.2 earthquake had hit Haiti. It was to become the biggest urban disaster in modern history. A third of the country's population was impacted, 13 of the 15 government ministry buildings collapsed and much of the UN Peacekeeping leadership was buried under the rubble.

It would not be until first light that the US military could conduct flyovers and determine whether planes could land or ships could dock. Still Raj along with his team worked all night to mobilize response teams and resources so the right help would be on its way. Within 24 hours, Raj was named the whole of US government coordinator for the response. And President Obama made it clear this was not going to be his Katrina.

This began his orchestration of the federal, state and local public sector capabilities along with the charitable and private sector humanitarian assistance to solve urgent and chronic global problems in new and innovative ways. He saw the awesome expertise, influence and capability the US government and its people could have. He knew that innovation and technology had to be at the cornerstone. This was to form the approach Raj used over the next five years in building an unusual consensus for foreign assistance.

Visiting more members of Congress than any Administrator had ever done, Raj listened hard to their frustrations, sometimes laced with anger as well as their ideas on how USAID could deliver on its promise of being an essential part of US Foreign Policy. He knew he had to find a common set of values that regardless of the political party, people could agree with. And it wasn't easy. Too many elected officials had stopped talking to each other -- preferring stonewalling or communicating through the press.

Raj was relentless along with creative in his quest for success.

He recognized that the political right often sprang from deep religious convictions that saw saving lives and humanitarian assistance as part of who we ought to be as Americans. They just wanted an Agency that performed these responsibilities more cost-effectively and with better leverage. He worked with those Senators and House members to forge an alliance around these values. And was honest about the changes that were needed.

He also shared the belief with national security experts in Congress that our own domestic security was at jeopardy if people overseas were starving or lacking any economic or political opportunity in their countries. USAID had demonstrated that brilliance when the Soviet Union had busted up in the 1990's. Almost overnight it had opened offices in 22 countries to assist the new governments with nearly everything, including banking, setting up courts, licensing and other essential functions. It helped dramatically solidify these fragile democracies. And yet, even these Congressional supporters wanted to know what USAID was doing to help create the conditions where AID was no longer needed. A stop gap -- yes. A transition -- yes. A forever AID plan -- no.

The economic landscape had also changed. The growth opportunity for US companies and domestic jobs is exports. The US economy is 70 percent personal consumption (retail sales, financial and healthcare spending). We aren't going to shop our way into greater wages and prosperity. And we can't afford our medical costs to go up anymore.

Public-private partnerships were the key to successful foreign assistance. Many US companies greatly valued the co-investments needed to source products and develop markets for US goods overseas. Raj, with his team sewed together support from the broad set of Republicans and Democrats. The Members often couldn't agree on big policy issues before it, but understood the unique value USAID needed to play in our economic and job future. It was one of the only Agencies to see a bipartisan increase in its budget.

Raj knew that to have credibility, he needed to have his strategy match the Agency's performance. He launched a major internal reform effort, USAID Forward. Innovation and technology were to be centerpieces of his reform. Despite the objections of some of the traditional AID contractors and the complexity of internal Agency change, he was relentless in the desire to deliver a new USAID.

Today, Raj Shah announced he was stepping down as head of USAID. As we turn the calendar with divided political leadership in Washington DC and coming off a frustrating Congressional term for everyone, let us learn the lesson that Raj demonstrated.

We have way more in common politically than we think. If we unveil these common values among ourselves, friends and foes alike, we can emerge with remarkable successes.

It's a simple truth: in everything we do, when faced with hard, even toxic situations let us be relentless about finding the common things we all care deeply about. And build from there.

Read more from Maura O'Neill and check out her blog: Our Simple Truths and Facebook page.