A first-year student in Jalandhar, India was found hanging from a ceiling fan in her hostel room yesterday morning. According to The Times of India, a suicide note discovered in her hostel blames two schoolmates and their insulting Facebook comments for her death.

Raksha Sharma studied computer engineering at MCM Polytechnic College, where the students her note accuses reportedly graduated from last semester. The Times of India reported she and her older sister were orphaned in 1997 when their parents were murdered in Jammu, India after militants believed Raksha's father was a police informant. After her parents were killed, she lived in an orphanage before attending college.

The two schoolmates named in the suicide note, Deepak Saini and Lovepreet Singh, were arrested Wednesday, according to New Delhi Television. The note accused them of using Facebook to harass her online. Police reportedly were unable to find Raksha's computer, but would be checking her Facebook page for evidence.

Luvpreet told NDTV he's innocent, and he and Raksha used to be close, but had a falling out a few months before.

"I haven't spoken to her in three months, and she even considered me as her brother," Lovepreet, 21, said. "I don't know how my name has come up in her note. I am ready for any investigation."

Deepak told NDTV he had posted comments onto Raksha's Facebook page, but in her responses to them, she did not seem upset.

The Indian Express reported the suicide note further accused Deepak and Lovepreet of forcefully taking money from her in the past.

"I feel bad she killed herself," Deepak said. "But I am not responsible." 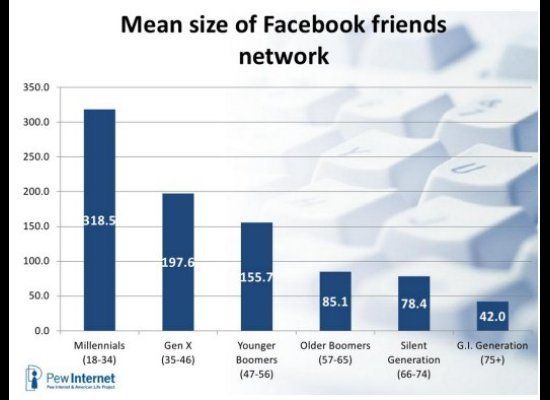 1 / 13
You're Right. Mom Does Not Have As Many Friends As You
Bar graph displays the average number of Facebook friends by generation.
Pew Research Center Publications