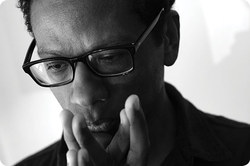 "How do you watch something kind of unwatchable? How do you hear something unlistenable?" asks Ralph Lemon, multi-media choreographer, addressing no one in particular. Talkative in a cross-country phone interview, he's musing on his latest dance work, How Can you Stay in the House All Day and Not Go Anywhere?

It's a good title for a dance. It's the kind of scolding a friend or family member gives you when you're really stuck and they're at their wit's end with you. Lemon's first piece in five years was greeted with the strong approval of New York critics, but it's been confounding audiences from San Francisco to Brooklyn. 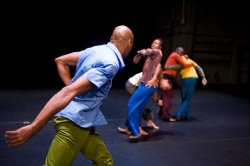 "There's no consensus. People either aren't sure or they love it," says the downtown dance maker about his own creation. He's bringing the show to Los Angeles's REDCAT performance space next weekend. He seems genuinely tickled to be back in a game he loves playing.

"Some [audience members] leave. Or the cell phones come out," he says, adding, "it's been surprising, but it's also encouraging that a work provokes conversations. It raises questions about what expectations you have going to the theater."

The bespectacled hipster, 58, is a recipient of a Guggenheim Fellowship, an Alpert Award, and a Bellagio Fellowship. He's taught at Yale, Stanford, and Princeton. Beyond his brainy dance works, he's garnered a considerable track record as a painter. Yet, as happens to the best of us, this art-world high achiever hit a wall six years ago when his life partner, the Japanese-born dancer Asako Takami, was diagnosed with cancer. 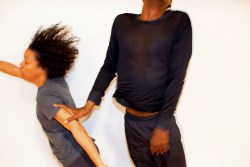 "I have been a dancer for 35 years," says Lemon. "My teacher said, one thing about dancing, you never stop. And I didn't. And I was proud of that. Then my partner got sick. I stopped for two years, and my caring for [her] became my practice. It was horrible, but it was the performance - the duet - of my life. I came out of it in a daze, and the last three years have become this work. It's changed everything about my existence."

Lemon's new performance vehicle for himself and a group of six is a deeply rigorous work that boils his intellectual quest down to the bone. A series of strung-together, off-kilter chapters, each discrete but bearing family resemblance, How Can You tests the viewer's tolerance for what the choreographer calls "duration." Stuff takes forever. Indeed Lemon, whose on-stage persona recalls a muted version of a nutty professor, seems to devilishly toy with his audience.

That's not to say How Can You is remotely funny. It's a grim and melancholic journey through a grey netherworld. At the core of the ninety-minute work lies an extended crying jag by dancer Okwui Okpokwasili, Lemon's muse and a recent BESSIE award winner. The dancer's slender figure heaves in horrible, disturbing sobs. It lasts a really long time. Notes Lemon, "It goes on and on and on and on." 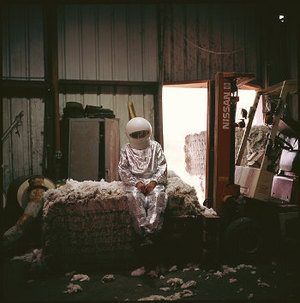 The piece was born of two staggering personal losses for Lemon. First came Takami's death in November 2007. Then, in March 2010, Walter Carter, the 102-year-old former Mississippi sharecropper with whom Lemon had forged an artistic collaboration, passed away. Issues of loss, impermanence, and the vagaries of existence permeate the work. Yet Lemon claims: "I don't think the piece was specifically about mourning or grief. There were these ideas of loss or recovery, absence that seemed phenomenal for me, and as an artist it all came out."

The first half of How Can You, lasting forty minutes, consists of video screened while Lemon sits onstage reading a text. The video presents Carter and his 82-year-old wife Edna, captured in their quotidian existence. The couple imitates the characters in Andrei Tarkovsky's 1972 film, "Solaris." Snippets of Ozu's beautiful "Late Spring" scroll by. The chokingly sad apropos is that Lemon and Asaka note above watched these films during her final days.

The video includes footage from a prior Lemon piece, Come Home Charley Patton, a scene in which Lemon, a buck dancer shuffling off to Buffalo, gets hosed - literally - by a jetspray of water, evoking '60s civil rights protesters.

The work has a world-weary, mid-life tonality: "It's one of my intentions to honor how life and work and love are all flawed. We have to hold onto that as part of living, and make that [the flawed part] elegant and graceful."

How Can You, says Lemon, "is all about questions. That is where I have landed. It's not about the answers. It's about the not knowing."

"It's a piece made in a blur. And it's about the blur of being human. I had the choiceless choice of stripping my practice down to some central concerns. It got interestingly murky. I have always brought my life into my work. But more so in this particular piece."

Ralph Lemon/Cross Peformance | How Can You Stay in the House All Day and Not Go Anywhere? | REDCAT | Walt Disney Concert Hall, Los Angeles | Nov 10 - 14