Ramadan is the ninth month of the Islamic lunar calendar, and is the month of fasting for observant Muslims. Because the cycle of the lunar calendar does not match the solar calendar, the dates of Ramadan shift slightly each year. Officially, the month begins with the sighting of a new moon. This has historically been a point of contention as the timing of the moon's visibility may vary by location, but the start and end dates are now generally agreed upon based on modern understandings of the lunar calendar. In 2011, Ramadan begins on August 1. The ending of Ramadan is marked by the holiday of Eid ul-Fitr, which takes place either 29 or 30 days after the beginning of the month. This year Eid ul-Fitr will fall on August 30. 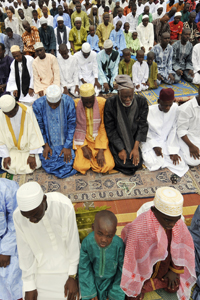 The origins of Ramadan draw significantly from the occasion of Laylat al-Qadr, frequently translated as "the Night of Power." It was on this night in 610 C.E., that Muslims believe the Quran was first revealed to the Prophet Muhammad and led the entire month to be seen as a holy time in the calendar.

Observance of Ramadan is also mandated in the Quran's second chapter, verses 183-185:

"O you who have believed, decreed upon you is fasting as it was decreed upon those before you that you may become righteous ... The month of Ramadhan [is that] in which was revealed the Quran, a guidance for the people and clear proofs of guidance and criterion. So whoever sights [the new moon of] the month, let him fast it."

During the month of Ramadan, adult Muslims engage in ritual fasting from sunup to sundown. This practice, Sawm, is one of the five pillars of Islam, and requires that individuals abstain from eating, drinking, smoking and sexual intercourse. Each evening, Muslims will break the fast at sundown with Iftar, a traditional meal often beginning with the eating of dates -- an homage to a practice of Muhammad.

All Muslims are expected to observe the fast once they reach the age of puberty. In Muslim-majority countries this frequently means that most people nap or rest throughout the daylight hours and are more active after nightfall. Meanwhile, the fast can present unique challenges for those living in non-Muslim nations around the world where business hours and social schedules are not altered to accommodate the month.

In general, the practices of Ramadan are meant to purify oneself from thoughts and deeds which are counter to Islam. By removing material desires, one is able to focus fully on devotion and service to God. Many Muslims go beyond the physical ritual of fasting and attempt to purge themselves of impure thoughts and motivations -- anger, cursing, greed, etc. As part of this, service to the community and to those in need is a major emphasis of activity throughout the month. 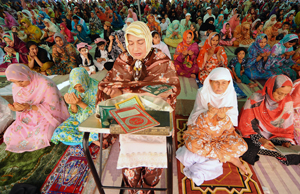 The holiday of Eid ul-Fitr, which marks the end of Ramadan, takes place on the first day of the following month and celebrates the completion of the 30 days of fasting. On this day, morning prayers are followed by feasting and celebration among family and friends. Eid is a day of great thanksgiving for Muslims -- an opportunity to show their gratitude for making it through the month of fasting and a chance to share their blessings with others.