Muslims around the world are fasting for the month of Ramadan, a time of devotion, community and prayer. Some choose not to perform the fast ― just like some Christians opt out of Lent and some Jews skip Yom Kippur.

But even among observant Muslims, there are those who may occasionally be exempt from fasting. Here’s a brief look at what that means and who falls into the exempt category:

What does it mean to be exempt?

Fasting during Ramadan is one of the Five Pillars of Islam, a set of worship guidelines outlined in the Quran to which all observant Muslims are expected to adhere. The pillars also include professing one’s faith, praying five times a day, donating money to charity and making the hajj pilgrimage to Mecca.

But there are some exceptions to the requirements noted in the Quran and in the hadiths, recorded descriptions of the words and actions of the Prophet Muhammad. Scholars of Islamic law, known as Sharia, have parsed through the nuances of these exceptions for centuries and make recommendations to observant Muslims on how best to observe the faith.

Ultimately, says Faiyaz Jaffer, an associate Muslim chaplain at New York University, it’s on every individual to practice their faith as they see fit.

“Sharia law is personal,” Jaffer told HuffPost. “The word ‘sharia’ in the Arabic language literally is translated as ‘the path to the watering well.’ Islamic scripture is derived from the Arabian peninsula, where the most prized resource is water. So the goal of Islam is to make sure that every person is walking on this path to the watering well, metaphorically, so we get closer to God.”

That means exempt or not, no one should face any kind of judgment over whether they’re fasting. “At the end of the day it’s an individual’s responsibility to perform one’s obligations,” Jaffer said.

There are several groups of people who scholars agree are not required to fast during Ramadan. These include the elderly, people who are pregnant, nursing or menstruating, people who are ill and travelers. There’s a variation of opinion among scholars of Islamic law regarding what constitutes exemption within those groups. For instance, Jaffer noted, “What it means to travel and how far differs among scholars.”

Most of the categories of exemption are in place due to the stress fasting can place on one’s body, Jaffer explained. People who are sick may need to take medication; nursing women may need all the nourishment they can get to support their milk supply.

Women who are menstruating are not supposed to pray or fast ― whether it’s Ramadan or not ― as part of the hygiene practices outlined in the faith. Some women see this as an outdated practice that stigmatizes women’s bodies, while others see it as a welcome break.

Those who miss fast days out of necessity can make the time up later in the year. Individuals with serious illnesses or who are elderly and will likely never make up their fast days are expected to pay a “tax” called a fidyah in which they give money to help feed a poor person for every day of Ramadan they miss.

If someone is seriously incapacitated and unable to make up the fast or pay fidyah, they aren’t expected to compensate. “They would essentially fall under the same category as children, who don’t fast until puberty,” Jaffer said.

In the case that someone chooses not to fast, he added, it becomes the responsibility of their children to fast on their behalf after they die.

How does one make up a Ramadan fast?

“Making up the fast literally means not eating or drinking from dawn to sunset any other time in the year,” Jaffer said. “Often people will choose to make up their fast during the winter when the days are shorter and the weather is cooler.”

Making up the fast days might seem like an easy solution, but Jaffer said it’s actually “much more of a challenge” to fast on one’s own.

“During the month of Ramadan there’s added motivation for someone to go and perform the fast,” he said, because their family and community are likely also fasting. “You feel a sense of support from everyone around you.”

It becomes that much more challenging to fast without the community component, Jaffer said, even if there are fewer hours between sunrise and sunset.

Can those who are exempt from fasting still participate in Ramadan?

“The month of Ramadan is a time of devotion,” Jaffer said. “It’s a means to demonstrate our submission to God and build our relationship to God.”

Even though fasting is a major component of the holy month, there are other ways to practice devotion during Ramadan.

Even for people who are exempt from fasting, it’s still a really important, blessed month.”

Jaffer noted that he often finds himself traveling during Ramadan to give talks on Islam ― which means he occasionally has to skip fast days and make them up later in the year.

“I try my best, and I advise others, to try to keep the sanctity of the month in their minds,” even if they can’t perform the fast, he said. “Even for people who are exempt from fasting, it’s still a really important, blessed month.”

And it isn’t just food, drink and sex that Muslims fast from during Ramadan. “We also practice fasting of our tongues,” Jaffer said. “During the month of Ramadan we’re told to be very vigilant about things we say. It’s an opportunity during these days to spend more time in reflection, supplicating, and reciting verses of the Quran. These are acts anyone can perform at any time, but they’re even more emphasized during these 30 days.”

Fasting Is One Of The Five Pillars Of Islam. But There Are Exceptions To The Rule
Ramadan Refugee Camps 2017 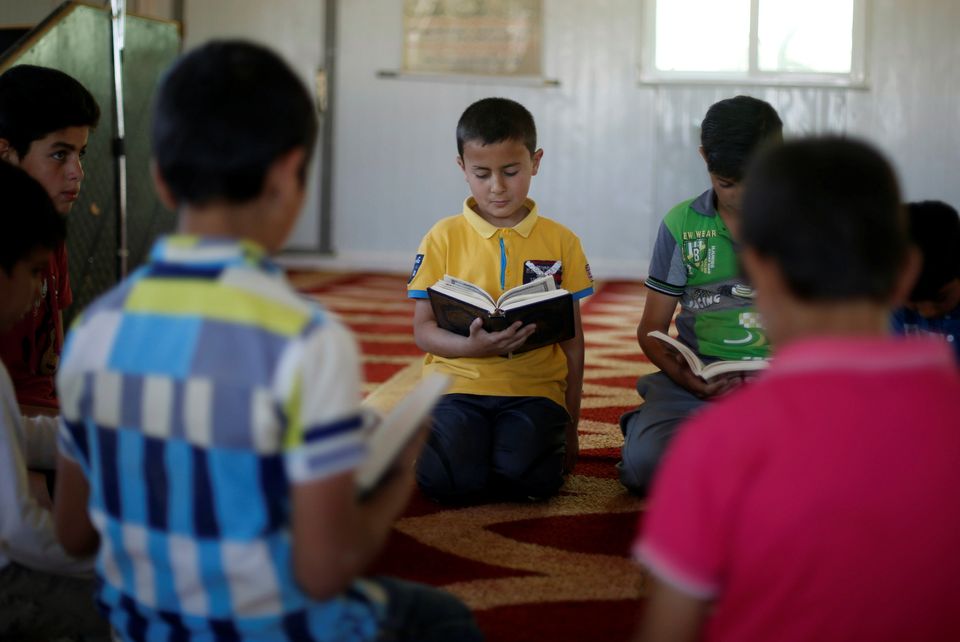 1 / 23
Syrian refugees boys read the Koran inside the Quran Memorization Center, during the Muslim fasting month of Ramadan at the Al-Zaatari camp near the border with Syria&nbsp;June 1.
Muhammad Hamed / Reuters