(RNS) To many non-Muslims, Ramadan is about fasting, and later, feasting. But Muslims know Ramadan as the month of the Quran, a time when the sacred scripture is recited, read and rehearsed.

Many Muslims attempt to listen to the Quran in its entirety during the month of fasting, either by attending evening prayers called “tarawih,” or more frequently by listening to CDs, podcasts, and online software programs such as QuranExplorer.com.

But searching for a recitation from a female “qariah” or reciter, Jerusha Lamptey, assistant professor of Islam and ministry at Union Theological Seminary, found none.

So she launched #AddAFemaleReciter campaign on Twitter, directing her efforts at the popular QuranExplorer.com site and other Quran recitation apps urging them to add women reciters. So far, her online petition has received more than 175 signatures.

“This is an issue of representation and inclusion,” Lamptey said. “There’s nothing that bars females from reciting the Quran. In fact it is incumbent on all Muslims to learn it and recite it daily without distinction in gender. But many women don’t hear or see people who look or sound like them reciting the Quran.”

The sticking point, said Lamptey, was not whether women could read or recite the Quran but whether they could do so before a mixed-gender audience — in person or online.

Two years ago, the Islamic Society of North America — the largest umbrella organization for Muslims in the U.S. — caused a stir when Tahera Ahmad, a female chaplain at Northwestern University, performed a public recitation of the Quran at its annual conference.

Some Muslims reject the female Quran reciters because they may distract or sexually arouse men gathered for prayer. This perspective allows girls to recite publicly, but only until the age of puberty. Others say women can recite, but not in a “showy” manner.

Such views are being challenged by scholars such as Omid Safi, professor of Asian and Middle Eastern studies at Duke University, who said it’s ultimately the responsibility of men to control their own urges; it is not fair to impose those restrictions on women.

Lamptey, too, thinks it’s time for a more mature understanding of the sexes.

For its part, QuranExplorer responded to Lamptey on Twitter and asked her to “provide us with some links to audio of female reciters so that we can evaluate it.”

Lamptey provided multiple links from the likes of Ahmad and others such as Sumaya Abdul Aziz Eddeeb of Egypt, Sharifah Khasif Fadzilah Syed Badiuzzaman of Malaysia, and Seemi Ghazi of Canada — many of whom are authorities in the art of reciting the Quran.

Indeed, in many parts of the world, including Indonesia, Morocco, Egypt, Malaysia, and Saudi Arabia, women regularly take part in Quran recitation competitions.

“The recitation of the Quran is to be celebrated in every voice,” said Safi. “When we exclude the voice of women, we are depriving all of us of half the possibility of experiencing God.”

PHOTO GALLERY
Ramadan 2015 around the world

At Ramadan, An Online Petition For Female Reciters
Ramadan 2015 around the world 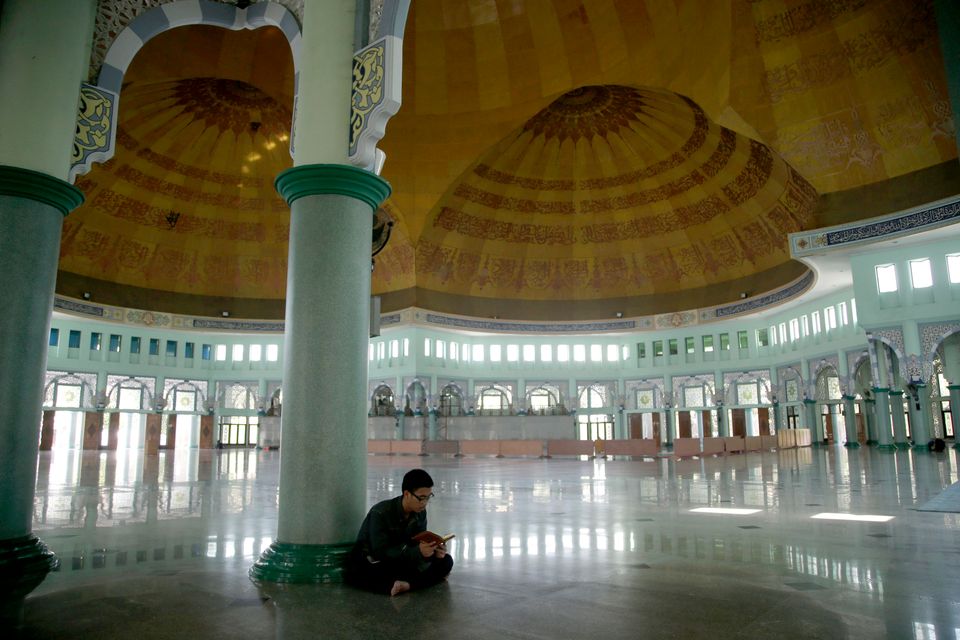 1 / 26
A Muslim man reads the Quran during the first day of the fasting month of Ramadan at a Mosque on the outskirts of Jakarta, Indonesia, Thursday, June 18,2015. During Ramadan, the holiest month in Islamic calendar, Muslims refrain from eating, drinking, smoking and sex from dawn till dusk. (AP Photo/Tatan Syuflana)
ASSOCIATED PRESS