In Arab countries, you count the days in anticipation of Ramadan. In the United States, we also count the days as we wait for Ramadan. We close our eyes and day-dream about its spiritual details, which, in a way, we miss out on. We fantasize about listening to the morning call to prayer that signals the beginning of our fast -- we imagine it as if it were coming straight from the mosque's minaret. Our hearts beat as we imagine the maghreb (sunset) call to prayer.

Ramadan in the United States is not as dreary as some people may think. The Muslim diaspora here is large, and the ties between them grow stronger during Ramadan. Mosques and homes become decorated with religious symbols, such as lanterns and crescents.

If you walk into Arab grocery stores, you would definitely get a taste of Ramadan. You'd run into people asking about the price of dates, or buying Vimto -- a Ramadan favorite -- or looking for a crescent-shaped ornament to place on their doors. At the end of the day, you'll have an iftar table, large or small, with a special Ramadan flair.

We eat katayef (a Ramadan pastry) like everyone else does, but the difference is that we bake it at home. We go through the hassle so that we'd be able to hold the piece of katayef in our hands, take in its scent, and say that we are truly observing Ramadan.

In the United States, unlike in Arab countries, Muslims exert extra effort to create a Ramadan atmosphere. 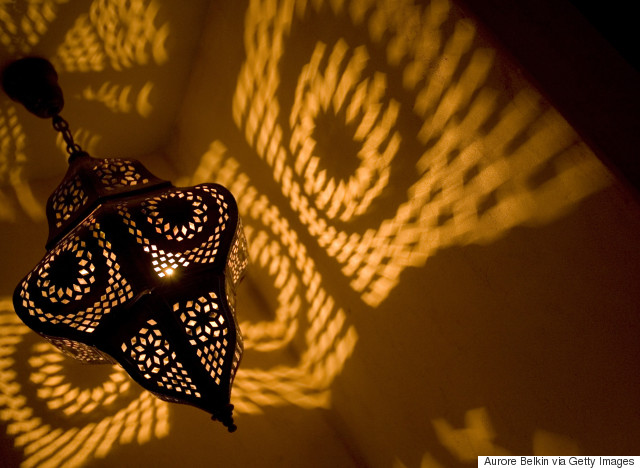 If you've lived in the United States your whole life, you wouldn't find it difficult to enjoy Ramadan. You would be able to get together with your family and relatives, and have an experience similar to that of any other Muslim in the Arab world.

If you were a visitor to the United States, and your trip happened to coincide with Ramadan -- don't worry or despair. If you want to retain that spiritual experience this Ramadan, you should try to go to cities where there is an abundance of Arab restaurants, such as Chicago, and you'll find Ramadan in one of them. You will see other Muslims waiting for the call to prayer so that they could start eating. Everyone there will be fasting like you, and will say a prayer before they break their fast with a glass of water and dates. You won't feel like you're missing out just because you're in the United States.

You'll feel as if you're experiencing all the Ramadans of the world, combined in one Ramadan in America.

The night prayers during the last 10 days of Ramadan are particularly beautiful here. If you go to the mosque at midnight, you would find young and old worshippers, parents and students, united in worship until sunrise. Many Muslims here -- those who speak Arabic and those who don't -- make an effort to read the Quran in full throughout the month.

The diaspora here works really hard, and they work even harder during Ramadan. They organize events, group iftars and charity banquets at mosques and schools. They also organize Quran competitions, in which young and old Muslims from Turkey, Ethiopia, and Arab countries participate. We do all this with love, and we try to breathe that love into our children, so that Ramadan may become a shining light, even away from home.

You'll run into Palestinians, Syrians, and Indians, and you'll exchange smiles with a Sudanese or an Egyptian Muslim from across the room. You'll hear "Ramadan Mubarak" from a Pakistani Muslim. At that point, you'll feel as if you're experiencing all the Ramadans of the world, combined in one Ramadan in America.

Ramadan is part of our identity, wherever we are. We will keep observing Ramadan to show the whole world that it is is alive in our hearts.

This post first appeared on HuffPost Arabi. It has been translated into English and edited for clarity.