Yesterday afternoon, Priya, Madina and I walked up a small hill overlooking the San Francisco Bay with Anum Ahmed, Tahir Chaudhry, Tamim Katawazi, recent alums of NYU who live in California, and Anum's brother Ibad. The scene was remarkably serene. The setting sun glistened over the water and the view of the city behind it was breathtaking. Madina, a year and a half old now, was enjoying it most of all as she ran and jumped over and over again. It was a real beautiful moment, until Madina slipped and fell.

Everything seemed to stop as Madina's cries pierced through our insides. We all ran towards her and as she lifted her head, we saw the blood gushing out excessively. Nothing else seemed to matter as we all ran to help in whatever way we could. Amidst it all, my wife's face is something that stuck with me the most. Although we all love Madina so much, you could tell Priya felt her pain in a different way. She took Madina close to her and held her til the tears stopped. She made funny noises and changed the tone of her voice knowing that it would get Madina to laugh. She cleaned up the cut, put on the antiseptics and bandaids, and soothed her with a quiet voice to make the burning sensation hurt less. She forwent eating her dinner to hold Madina, who had fallen asleep, in her arms. She then rocked her gently to sleep again once we were back in the hotel and, hours later, woke up and held her some more when she started to cry again around fajr time. The love of a mother is remarkable.

"God is more merciful to His servants than a mother is to her child." ~ The Prophet Muhammad, peace be upon him.

The Prophet Muhammad on numerous occasions utilized the love and affection of a mother towards her child to illustrate to his companions how much God loves and is merciful towards His creation. Once in the aftermath of a battle, he and his companions saw a mother looking for her son and witnessed her reaction after finding him. He asked them if they think this woman would ever hurt this child, literally "Do you think this woman would ever throw her child into the fire?" Their response is no, not if she has the authority and power to keep him from it. The Prophet responded that God is more merciful to His servants than a mother is to her child.

Growing up, my understanding of God was always tainted by a negative framing. Through Sunday schools and Friday sermons, I learned that God was watching me, but only later on in life I understood that God was watching over me -- two very different things. A fundamental value in Islam is Ihsaan and a definition of the word is given by the Prophet Muhammad when he is engaged by the Angel Gabriel, peace be upon him, on one instance. At that time he asks the Prophet what certain fundamental concepts in Islam mean, inclusive amongst them the word Ihsaan. In response the Prophet Muhammad says, "[Ihsaan] is to worship God as if you can see Him because although you cannot see Him, He can see you." When I was younger, my understanding of God made me understand this concept as one that told me to be careful because God is watching wherever you are. Now that I am older I understand it moreso as "Be strong and courageous, God is with you and watching wherever you are." My understanding of God has begun to be shaped more by how He describes Himself.

In a hadith qudsi, God says "I am as My servant thinks I am." As we become more mindful and conscious in this month of Ramadan, the time is key to ask ourselves what do we really think of God. Do you conceptualize God as being the Most Merciful of all those who show mercy, even more merciful than a mother is to her child? As being the Most Gentle and the Most Compassionate? Or do you see Him as an angry, old man looking for a reason to punish? It's an important question because how you conceptualize God will dictate so many things in your life. I personally prefer the former rather than the latter. You will have to decide for yourself how you approach it. 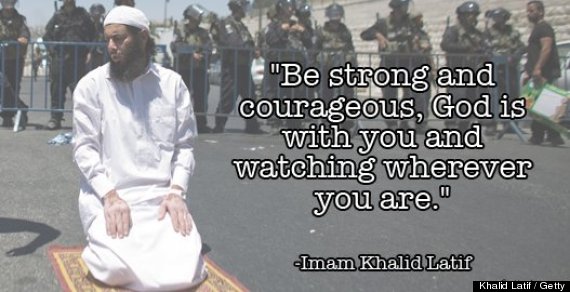