One of my former students reached out to me recently in regard to his father's fasting. He didn't know what would be the best way for his father to complete his daily fasts. He is an elderly man and is far away from any family or friends. He hardly speaks with anyone, let alone sees anyone face-to-face. The young man's main concern for his father had to do with his inability to know when to start and stop fasting. His father, like many other Muslims, was and currently still is forced to live in solitary confinement. He can't see the sun to know whether it is up or down and the guards at his facility won't tell him. So he, as his son described it, is just trying the best that he can.

This conversation resonated with me in a lot of different ways. Aside from the reality of unjust incarceration of hundreds of men and women living in a post-9/11 world or the fact that the experiences of people fasting vary quite drastically, I am more inclined to seeing a gap in our leadership in the Muslim community, and wondering when we will begin to fill it.

Organized evil will always triumph over disorganized righteousness. This is truth, whether we choose to accept it or not. We can have good intentions all we want. If we have no plan, we will continue to be mistreated, our civil rights will be non-existent, and we will find ourselves sitting at dinners where we are verbally slapped in the face by the hosts and will have no real recourse other than to fight with each other afterwards on social media. Congrats -- you won the war on Twitter. How about we sit down and figure out collectively how to win the war that is being waged against us in the real world?

Unlike most minority groups living in the United States, the Muslim community has no federation or established systems of networks of any kind. On a local, state, or national level, there is virtually no communication or strategy being employed whatsoever. Moving aside from building coalitions external to the broader Muslim community, the development of intra-community coalitions is necessary. I wouldn't undermine one's resolve to "be at the table" with other groups. But it shouldn't come at the expense of us sitting at the table with each other and it very much so is starting to.

We have to build a strategy and empower leaders of all kinds to become transformational in their leadership rather than simply being reactive. If our community's biggest victory this Ramadan is not getting parking tickets on Eid because of the fire hazard that is our parking lot that has been expanded five times already and cost millions of dollars, then we are selling ourselves short.

Start locally. Bring together leaders of local community centers, mosques, businesses, and non-profits to strategize on how you want to grow. If you don't know how to do it, put in the money to bring in consultants to help and provide similar financial support to communities that might not be as wealthy so that they can do the same. Come to a consensus and then honor what is agreed to, even if you disagree with it. If people don't want to think bigger than their own egos, then move on without them. This is not about any one individual -- it's much bigger than that.

Religious authority and scholarship should be at this table, but not alone and not necessarily as the final say. We have a silent majority that is not being tapped into that can help shape a vision of growth for our community and we need to be able to bring them up and give them a platform. We also have to be strong enough to break precedent that places people in roles of decision-making that they are not on their own qualified to undertake.

When was the last time there was a plenary session of any kind at any of the major national Muslim conferences that take place in the United States? I speak at many of these conferences and nothing really builds up with a strategy year-to-year. Rather it's the same thing being talked about every year by the same people. There is no introduction of ideas or initiatives that can be replicated in local community. Inspiration takes the place of substance and we're left with the only measure of success being how many people attended.

As you come together in these nights of Ramadan, take advantage of the opportunity and spend some time building a plan for your community. Map out who is who and what they are doing and use the opportunity of inviting them to break fast with you in hopes of breaking down barriers that are keeping us from moving forward as a community.

"Indeed, God will not change the condition of a people until they change what is in themselves." ~ The Holy Qur'an, 13:11

Be the change that you wish to see. It's time for us to be better. 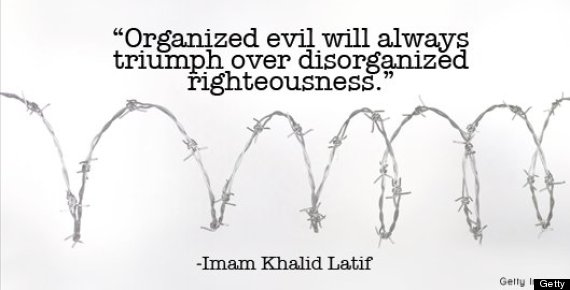