BRONX SUPREME COURT — A judge may throw out the indictment of the NYPD officer who shot and killed Ramarley Graham, based on a concern about the way the grand jury was instructed by the Bronx District Attorney's office.

Supreme Court Justice Steven L. Barrett, after reviewing the grand jury minutes in the indictment of NYPD officer Richard Haste, said Tuesday that prosecutors may have  improperly told jurors they did not have to consider what other officers told Haste before Haste made the decision to fire the shot that killed the unarmed 18-year-old.

Lawyers for Haste have said he was repeatedly told by fellow officers they believed Graham had a gun. However, no gun was found on Graham.

"What he heard may have very well informed what he did," Barrett said.

Barrett said he considered the issue very serious and would give the Bronx District Attorney a chance to present the case again to a grand jury if the indictment is thrown out. Barrett instructed lawyers for Haste and the district attorney's office to submit short memos and scheduled a time for them to make oral arguments before the court next week.

On Feb. 2, 2012, officers from a special narcotics unit chased Graham from White Plains Road and East 228th Street to his home at 749 E. 229th St. in Wakefield because cops investigating a drug deal believed Graham had a gun in his waistband.

Officers pursued Graham into his home and Haste fatally shot the teen in the bathroom after claims from Haste that Graham did not obey commands to show his hands.

Haste was indicted on manslaughter charges. Graham's family believes their son was murdered and have called for Haste to be convicted.

Stuart London, who is representing Haste, said the officer made crucial decisions based on the information he was given by fellow officers.

"The whole case centers around justification and the reasonableness of his actions," London said outside the courtroom. "Officer Haste's mindset was formed by fellow officers from his team."

London wondered whether Haste would have been indicted if the grand jury was instructed to consider statements from other officers in determining whether Haste should be indicted.

"The grand jury may well have made a different decision," he added.

Patrick Lynch, president of the Patrolmen's Benevolent Association, said he believed the indictment might be "thrown out."

"It is significant what other officers said, that a weapon was involved," Lynch said.

The Graham family met with lawyers from the Bronx District Attorney's office after the hearing.

"This issue is in litigation and we cannot comment beyond what is in the court record, which we are checking," Steven Reed, spokesman for the Bronx District Attorney's Office, said in a statement.

"Legal papers which we will file in support of our argument that the indictment is sound, will place the instructions to the grand jury in the proper context," he added.

Ramarley Graham's mother, Constance Malcolm, said that even if the indictment is thrown out, it would not stop her from advocating for her son.

"We will continue to fight because we will get justice," she said outside the courthouse.

Royce Russell, an attorney for the Graham family, also called the review a minor blip. He said he was confident the legal instructions were proper.

"Clearly the family is disappointed that justice is being delayed, but justice will be had. Richard Haste will be convicted," he said.

Haste, wearing a purple tie and a black suit, remained stoic throughout the hearing and left the courtroom promptly afterward without commenting.

More than two dozen supporters for the Graham family said they were disappointed by the news.

"There was nobody that could see a gun inside that bathroom," said Graham Weatherspoon, a retired NYPD detective and a member of the Black Law Enforcement Alliance.

"If we have to do this over again, so be it. But I believe this man will be found guilty and will go to jail," he said of Haste. 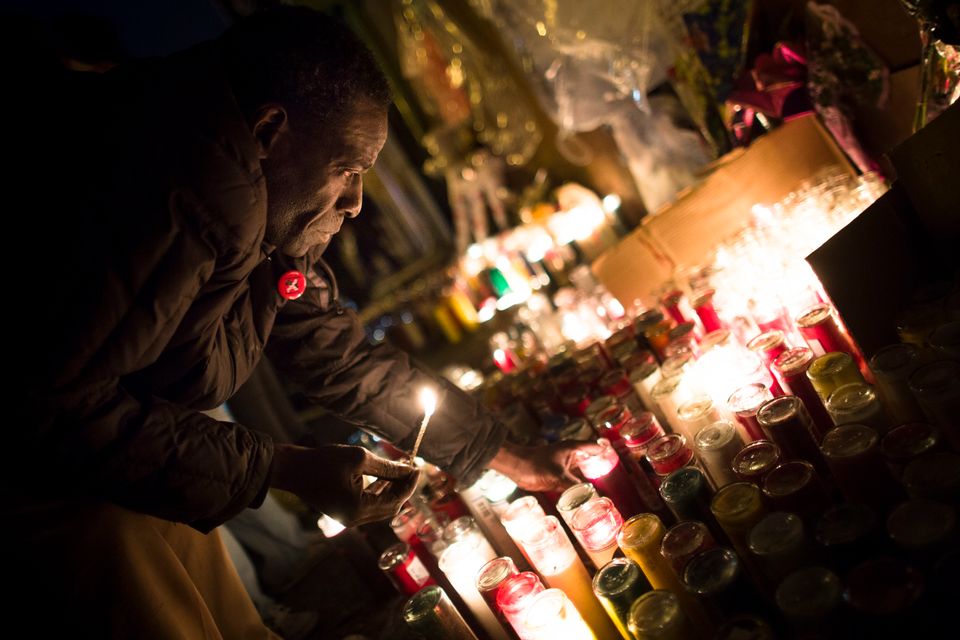 1 / 23
Evan Brown, 53, lights candles during a vigil held for Kimani "Kiki" Gray in the East Flatbush neighborhood of Brooklyn, Wednesday, March 13, 2013, in New York. The 16-year-old was shot to death on a Brooklyn street last Saturday night by plainclothes police officers who claim the youth pointed a .38-caliber revolver at them. (AP Photo/John Minchillo)
AP