OK, not the noodles themselves. Not the stretchy, slurpy stuff that -- instant and otherwise, topped with everything from prawns to potato chips -- comforts millions around the world, around the clock. It's not racist in substance but in context -- if you go back far enough.

Ramen -- although it wasn't called that, then -- first appeared in Japan in 1910, when Chinese cooks at Tokyo's Rairaiken restaurant created a signature dish comprising broth and Chinese noodles, which were yellower and more elastic than Japanese noodles because -- then as now -- their dough was kneaded with
kansui
, a sodium-carbonate-infused alkaline mineral water.

This wildly popular dish was not called ramen but rather shina soba: Shina is a phonetic rendering of the word "China." Soba are buckwheat noodles, although the Chinese noodles used in shina soba were wheat-based. Over the next few years, restaurants all over Japan started serving regional versions of shina soba, using local ingredients.

Chinese-style decorations, costumes, and products were eagerly consumed by the Japanese public as they translated colonialism into a concrete experience. By physically interacting with China through the ingestion of Chinese food and drink, the Japanese masses were brought closer to the idea of empire.

In other words, to eat shina soba in those years was to symbolically gobble up China itself. As China represented the empire's biggest prize, a bowl of shina soba represented nothing less than world domination.

After Japan lost its empire in World War II, the word shina came under fire. Deplored by many as a symbol of imperialist aggression and Japanese wartime atrocities in China and beyond, shina was now seen as a horrific ethnic slur, embodying imperialist xenophobia: in other words, racist. Shina soba was briefly renamed chuka soba; chuka is a less politically incorrect Japanese term for "Chinese-style." But in 1958, Nissin Foods introduced the first-ever packaged instant version of the dish. As its broth was chicken-flavored, the product was called Chikin Ramen.

The Japanese word ramen is derived from the Chinese words for "pull" (la) and "noodle" (mian) because Chinese noodles are traditionally "pulled" by hand, according to Crazy for Kanji author Eve Kushner. (That selfsame mian informs our Englishizations "chow mein" and "lo mein.")

Nissin brought Top Ramen to the USA in 1970. These days, Nissin nets over $3 billion a year. But ramen isn't just instant. It's everywhere. 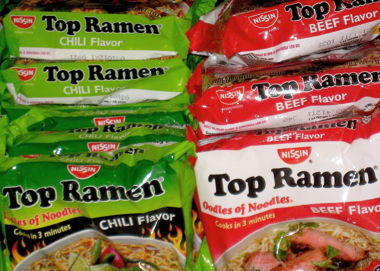 And although its nomenclature issues really are so last century, it's all the more comforting now that its name is politically correct.

Ramen is one of those concoctions I call compound comfort foods, comprising more than just one comfort element. Put soft (comfort element #1) starchy (2) noodles (3) in salty (4) broth, which more or less amounts to chicken soup (5), served piping-hot (6) in the world's most reassuring type of dish: a bowl (7). Now that's a superpower. No wonder the Seattle Weekly ran a list last week of "24 Hours of Ramen Recipes," suggesting Top Ramen baked into pudding, chopped into trail mix, dipped into salsa, and stuffed into tortillas. No wonder Yokohama has a ramen museum outfitted with replicas of regional ramen shops. No wonder there are so many ways to love this stuff.

"It has to be al dente," says Yo Matsuzaki, executive chef at Ozumo restaurant in Oakland, California. Born in Shikoku and trained in both French and Japanese cooking, Matsuzaki spent years working with Iron Chef Masaharu Morimoto at New York City's Nobu.

"Ramen should be eaten very quickly, because if it sits in the broth too long, it will get mushy. That's why we have to make that slurping noise when we eat it, because the broth has to follow the noodle into the mouth, and it's hot."

Although Matsuzaki says he "grew up on ramen" and ate countless packages of instant ramen as a student, at Ozumo he serves the real stuff: Red miso enriches the broth, Hokkaido-style; then spicy ground pork with chili, garlic and sesame oil go on top.

For his own meals, he likes to make it with duck-bone broth and naniwa noodles, a type of high-quality thinnish udon that has been handcrafted in Japan's Akita Prefecture for over 300 years.

"They're my favorite," Matsuzaki says of these noodles, which he buys dry, "because they're delicate yet still have a sort of crunch to them."

In a fusion mood, Matsuzaki tops the dish with duck confit, Japanese fishcake "and sometimes a poached egg -- but you don't want to overcook that." 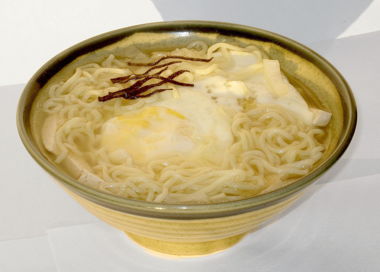 My friends the Lee family eat ramen nearly every day. When wife Susan met husband Evan while both were students at UC Berkeley, "Evan had an old, thin, cheap pot that he always made his ramen in; he used it until the handle fell off," Susan says. "Then he had to find a new ramen pot. This one is good quality, and will outlive all four of us."

When her now-teenagers Maria and Michael were small, Susan made them instant ramen using just a bit of the flavor packet, with frozen mixed vegetables -- peas, carrots, green beans, corn -- mixed in:

"This was pasta primavera for tots. Pour off almost all the broth, stir in a couple of big spoonfuls of cream cheese, and we had Alfredo-style pasta for tots."

These days, "we love ramen because it's salty and slurpy, and because the curliness of the noodles gives some pleasure to the lips and gums but we can just crush them against our palate and swallow without chewing," she explains. "We love it because we can make it in the dark with our eyes half-closed. We love it because it's exactly the same size portion every time, so we can make it and eat it out of the pot without measuring anything or having to wash anything but the pot and the fork/spoon/chopsticks.

"At our house, almost every pot of ramen has an egg stirred into it and cooked through before being eaten. This makes it proteinaceous enough to qualify for breakfast, which is in fact the hour at which we most frequently eat it. A couple of us like to up the protein -- and salt -- by slicing a hot dog directly into the pot, to heat through before serving. One of us particularly likes the egg and hot dog version with a slice of American cheese laid gently on top at the last minute, thence to take a bit of the softly melting square with each bite.

"Stirring the cheese in would miss the whole point."