Just when you thought you'd seen every wacky food mashup out there -- from Cronut™ Umami Burgers and Pumpkin Spice Latte Burgers to Poutine Dumplings -- a new totally mind-blowing one comes along to put you in your place. This newest one is so obvious it's been sitting right under our noses since the dawn of the Cronut™ and the Ramen Burger. We're talking about ramen doughnuts, of course.

Coming at you from food blog Culinary Browdown, these ramen doughnuts are called Ramnuts, and they're both terrifying and awesome. One part Cronut™ -- the doughnut part, obviously -- and one part Ramen Burger -- yes, the ramen -- it's two parts awesome in one entirely new food mashup that we can't believe we haven't seen yet. 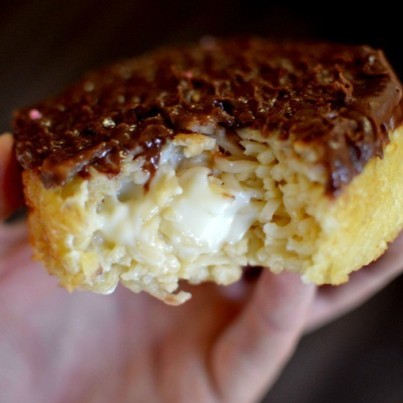 We've seen ramen go too far, and witnessed the similarly sad fate of doughnuts off the deep end. Somehow the Ramnut walks that fine line between overkill and obvious, and gets us excited about food mashups all over again. Maybe that's because creator Josh of food blog Culinary Brodown has a good sense of humor about the whole thing. The headline of his Ramnuts story kind of says it all: "Ramen Donuts (Ramnuts) & I'm Incredibly Serious About This Shit." Josh says he's looking to sell the trademark on his invention, for $50 and an Olive Garden gift card.

Josh doesn't make food because it tastes good. He wants to "produce food culture" instead of "consume it." He makes things like Ramnuts, Flamin’ Hot Cheeto Onion Rings and Spicy Tuna Corndog in the name of science, he explains.

As he puts it:

So whether or not Ramnuts taste good is besides the point. These babies are "for science," Josh says, and you have to make them yourself to find out whether or not you like them. (Josh likes them, for what it's worth.)

Making your own Ramnuts may sound daunting, but the process is actually quite simple. You boil the ramen noodles in horcahta (we never would have thought of that, but it's pretty smart), mix the noodles with egg and then freeze the mixture. Next simply cut out doughnut rounds, fry them and cover them in glaze, frosting or whatever you want.

For the full Ramnuts recipe, check out Culinary Brodown.