About a month ago Gawker reported that staffers at the (what's the right adjective here? Sensationalist? Delusional? Wretched?) New York Post were "disgusted" with their own newspaper and boss:

"Why has the New York Post marshaled at least 16 reporters to bedevil a single homeless man named John Tucker? According to a current Post employee, the person directing the paper's unbelievably vicious coverage is none other than alleged pig-fucker, proven sink-pisser, and sitting editor-in-chief Col Allan, who is apparently motivated by the fact that Tucker lives in his own neighborhood, the Upper West Side of Manhattan."

This was pretty remarkable. The Post had led a media stampede about a crime-aggedon back in June and was now following around homeless people and running front page stories about a supposedly decaying New York City under mayor Bill de Blasio. If staffers at the Post say they're disgusted at the coverage, that's saying a lot. 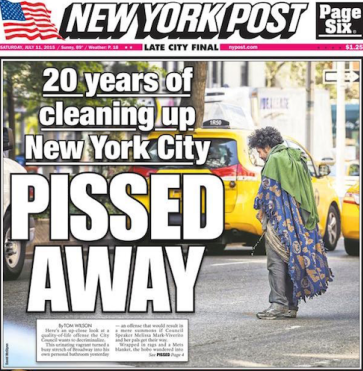 But it wasn't just the Post. The New York Times tried legitimizing the Post's screeching headlines over the horror of a man taking a piss on the fancy zipcodes of the Upper West Side with its own story about public urination, complete with a urine map of the city:

"Evidence pools beneath rows of pay phones, between parked cars, outside bars where last call has come and gone." wrote J. David Goodman, one of the Times' god-awful policing reporters.

It didn't stop there.

CBS 2's Marcia Kramer recently took Mayor de Blasio to task about the homelessness that, to her astonishment, still exists in New York. Kramer saw a man scrummaging through the garbage in, you guessed it, the Upper West Side. She quickly connected this unwanted intrusion into the wealthy Manhattan neighborhood to "an uptick in violent incidents"--a connection that, of course, there is no evidence for. It's not clear if Kramer also lives in the Upper West Side, like Col Allan, but don't be surprised if she does.

Just three days later Kramer waved pictures of a homeless man bathing in the Columbus Circle fountain at a de Blasio press conference. The pictures were taken by none other than a former Rudy Giuliani stooge and media relations guy named Ken Frydman.

The hand-wringing outrage over an influx of homeless folks and "violence" are like echoes from twenty years ago when Giuliani and a younger Bill Bratton steered the city towards policing that focused on 'disorder', like homeless folks and squeegee men, otherwise known as Broken Windows policing. The Post had already done a big story about squeegee men returning and "terrorizing" the city last August. 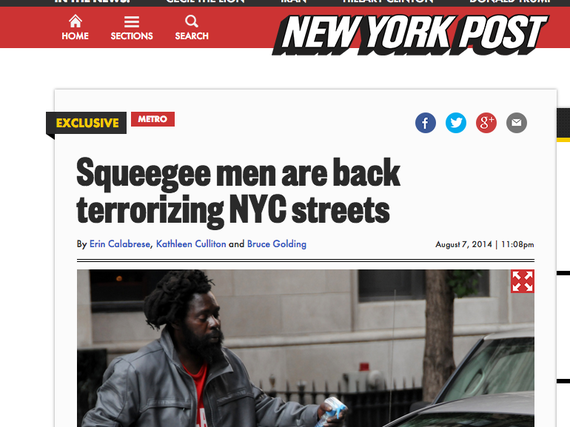 De Blasio, who continues to pledge allegiance to the racist and discredited policing theory that Bratton cherishes, promised to "enforce quality-of-life offenses" alongside his police commissioner.

Bratton, not to be outdone by the fear-mongering of the Post or CBS, also recently held a press conference to sound the alarms over synthetic Marijuana, or "K2". Videos were shown to the press to support Bratton's assertions that this form of weed was making people impervious to pain and giving them "superhuman strength". This, of course, neatly frames cops, more and more scrutinized over use-of-force over the last year, as in danger of something approaching a zombie invasion.

One problem: one of the videos (featured on various nightly news segments shown to the public), was shot in Des Moines, Iowa in 2002, was featured on the COPS television show in 2003, and spotlighted a man who may or may not have been high on PCP--not synthetic Marijuana. 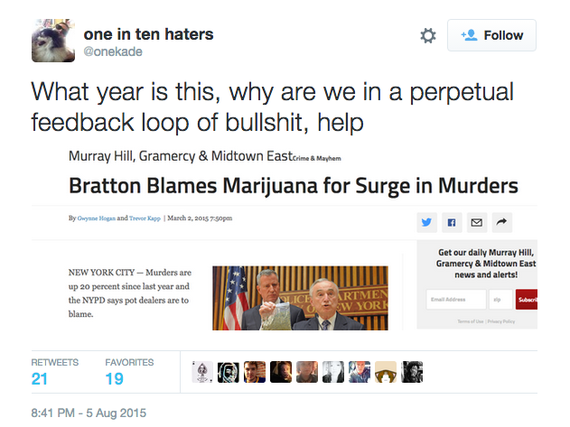 As your palm starts making its way towards your face, just remember that this is the de Blasio era of policing so there'll be some token liberal cookies thrown about that resist team Giuliani-- but still clutch to the Broken Windows theory. The de Blasio administration, for example, has said that there should be some mental health treatment aspect as a response to rich people complaining about the homeless in their neighborhoods. It's all so very 'progressive' and sophisticated, you see.

Still, this is the same administration that committed hundreds of Millions (eventually Billions) of budget dollars to 1,300 more cops instead of mental health services. So instead of lining up behind that kind of 'progressive' thinking, you're better off hitting the streets this weekend for a few actions organized to combat the NYPD's usual bullshit.

Starting tonight, activists will camp out in Tompkins Square Park in the Lower East Side. The campout, scheduled to go on through the weekend, was organized after the NYPD put a panopticon (those ominous looking mechanical NYPD structures usually found in Black and Latino neighborhoods that give the city that open-air prison feng shui) in the middle of the park. Once again egged on by the press' pearl-clutching (S/O FAIR's Adam Johnson for this really great term, by the way) articles, like the bougie New York Observer and the Post (again), the NYPD said the panopticon was in response to the homeless scourge that the media told them was festering.

And while the panopticon was recently taken down after the protest began to pick up steam and visibility, the organizers are still planning to turn out. Local blog EV Grieve has done some great reporting on this. They've pointed out the angle, as in the case of the Post's Allan, that suggests Observer owner Jared Kushner has a special interest in a heavy-handed police operation against any homeless in the area: Kushner owns real estate throughout the neighborhood.

Tompkins Square Park is a symbol of resistance of gentrification and policing in this city going back to 1988 when the NYPD tried to violently sweep people out of the park. So when the Observer's editorial page screams "Take Back Tompkins Square Park. And New York City", you can be sure there's a lot of history in this fight. 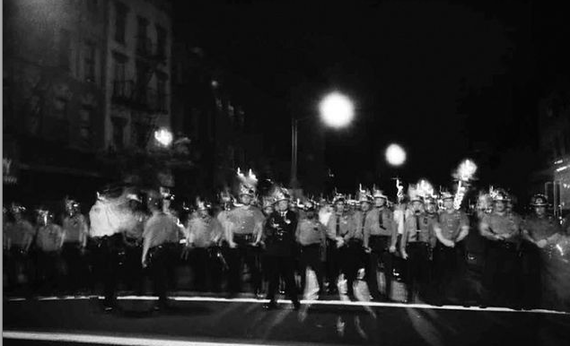 NYPD in 1989 about to sweep Tompkins Square Park

And it's really deja vu in New York when one of the key police commanders back in '89 trying to 'cleanse' the park was none other than former Deputy Inspector and current Deputy Commissioner of Training, Michael Julian. From the NY Times, 1989:

''If they want, the homeless people can come back later with blankets and sleeping bags. They just won't have the structures,'' said Deputy Inspector Michael Julian, commander of the Ninth Precinct, as several protesters closed in around him, chanting ''Sieg Heil'' and ''New York City, you can't hide; we charge you with genocide.''

Julian previously held top security gigs at Madison Square Garden and Rockefeller Center after working for Bratton in the 1990's. He was the head of security at a mall in Australia when Bratton gave him a consulting gig for the police department last year, which then became a top job at 1 Police Plaza where Julian has pushed breath mints and a $60,000 Zumba center for cops.

Even though men like Julian belong in the next Police Academy sequel, the NYPD's crackdowns on the homeless are no laughing matter. Bratton did this in New York in the 90's and continued that tradition by going after homeless folks in the Skid Row section of Los Angeles when he headed up the LAPD. Perhaps no one in this country has contributed to the criminalization of homeless people than Bill Bratton.

Last year the NYPD tried going after some homeless folks at a shelter in Manhattan with a raid but backed down when Picture The Homeless, an advocacy group that fights for homeless New Yorkers, mobilized with rallies and protests. PTH also successfully stopped a planned sweep of the homeless in the subway system early last year, making them 2-0 against Bratton in 2014. PTH members Jean Rice and Marcus Moore penned an op-ed in the Daily News one year ago calling out the homeless raids that seems pretty timely right now:

"If we are truly serious about taking significant strides to end homelessness, this type of scapegoating must end and we need to collectively focus on real solutions, like providing more affordable housing and economic opportunity for the homeless."

In addition to the Tompkins Square Park campout this weekend, there are also a few actions in the city on Sunday marking one year since Michael Brown was shot and killed by a cop in Ferguson, Missouri. One starts at 2:00 p.m. in front of the Harlem State Office Building.

I'll be out there. Let's keep this fight going.