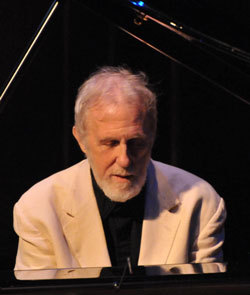 Ran Blake was over at our house for dinner a while back, and at the end of the evening he asked me to show part of any movie that I considered extraordinary. I chose something contemporary, Melancholia, directed by the strange, and often fascinating, Lars Von Trier and starring Kirsten Dunst and Kiefer Sutherland. I won't even try to describe the story ,but the movie contains, in its opening 10-minute sequence, some of the most beautiful and magical images ever created on film. It was this that I wanted to reveal to Ran, who didn't know the movie. I watched him absorb the scene, live in its moment of abandon and imagination. Those few minutes of observation allowed me to understand just how important film is to Ran, why he is so consumed by its power, and why it has been a continuing source of inspiration in his music-making.

An extraordinary improvising musician who styles himself a "noir pianist," Ran celebrates his 80th birthday on August 20 this year. He can look back, and indeed forward, at a life spent entirely in music as a performer and as an educator. His past and current students revere him and speak in the same awed tones I have heard used by those who have studied with Nadia Boulanger, Carl Flesch and Vera Roza.

He has some of the greatest ears in the business, he is musically challenging and he stretches his students, and indeed all his collaborators, with the new directions and ideas his improvisations, compositions and arrangements take. This is, after all, a musician who worked with Dizzy Gillespie and who Gunther Schuller charged with creating New England Conservatory's Third Stream department 42 years ago. (That department, which has burgeoned into Contemporary Improvisation or CI, now led by the energizing Hankus Netsky, is perhaps the most unique and creative program at any conservatory in the country.)

Ran still performs and much prefers to play with all the house lights off. I must say that the dark has a way of galvanizing the ears, and I would love to hear more performers experimenting with this style of delivery. Try listening to his recent album with the great jazz singer Dominique Eade for a superlative example of his art. And maybe even try it with the lights off!

Which is a great segue to the world of film noir, the genre, or, dare I call it art form, which permeates Ran's work as a musician. He has been fascinated by the genre all his life, and he is not alone. Its unmistakable essence still pervades so much film-making even today. Where indeed would Martin Scorsese or Quentin Tarantino be without the foundation and inspiration of film noir? 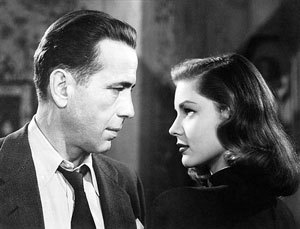 We all recognize the idiom intuitively whenever it appears. Just think of all those classics, The Maltese Falcon, The Big Sleep, Sunset Boulevard, Double Indemnity, Lady from Shanghai, The Third Man, Shadow of a Doubt, Cape Fear and perhaps the most disturbing of them all, Night of the Hunter, the only movie directed by Charles Laughton, who creates his own world of fear and anxiety through the inclusion of children who are central to the plot. But I could extend this list almost indefinitely. Film noir captures something in our collective consciousness that we respond to viscerally and emotionally. 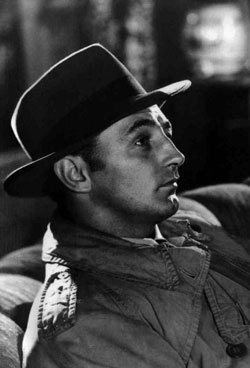 First off there is the style. America in the 1940s and '50s with its chic and energy and confidence. Then there are the characters. The men as anti-heroes, a bit seedy, not necessarily handsome, but fascinating, as portrayed by a Robert Mitchum (in photo right) or Humphrey Bogart.

These are guys who are slightly damaged by life, street wise, cynical and vulnerable. They are also very tough. The women smolder. Their dark contralto voices are marinated in gin martinis over which the vermouth bottle barely pauses. Their ever present, languorous cigarettes punctuate the action and the interplay with these tough guys. (See Ann Savage from Detour in photo below.) But it's the women who are really in charge, who are far more powerful than the guys. Until, of course, that moment when the seductress falls into the man's arms, weak and grateful, but... don't believe it. 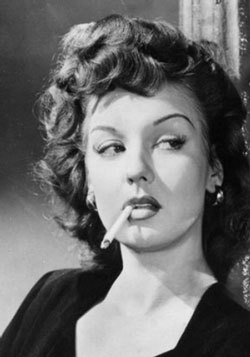 Film noir has to be seen in black and white. Just imagine how wrong those ever lengthening shadows in The Third Man would be if it had been shot in color. Everyone has to stalk around in long rain coats, hastily tied at the waist. And hats are the order of the day for both men and women. Can you imagine Dana Andrews in Laura not having his hat at all times? It's an essential prop which helps color the character. The films also have an absorbing patina of sex, both suppressed and overt. Think of the manifest play the very young Lauren Bacall makes for Bogart in To Have and Have Not. It's so intimate and sensual. And then there's the dialogue. There's tons of it rattling out at light speed. Think of Clifton Webb in Laura in his bathroom dashing off more bon mots than Oscar Wilde. Tarantino must have spent a whole year watching film noir before he finally came up with Reservoir Dogs and Pulp Fiction which then reintroduced the whole concept of the importance of the screenplay in the 1990s.

No wonder then that Ran Blake has spent the last ten years devoting himself to a very special film noir performance project at NEC where each year he selects a classic such as Laura, a collection of Brandos, works of Claude Chabrol, Cat People, The Spiral Staircase, Bunny Lake is Missing and I Walked with a Zombie. The movie is screened in part, sometimes with fragments of the original sound track but more often with new music or arrangements performed by students in the CI department. It makes for an unforgettable musical and filmic event of originality and wonder. 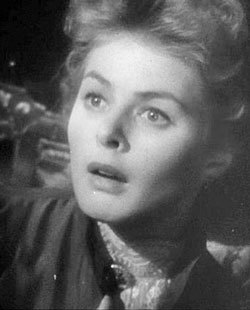 To celebrate the 10th anniversary of the film noir series Ran has chosen the classic Gaslight. There are two versions of the movie. The British original dating from 1940 directed by Thorold Dickinson with Anton Wallbrook as the intimidating husband and Diana Wynyard as his wifely victim. It's based very much on the play by Patrick Hamilton. And then, just four years later, Hollywood went for a remake directed by George Cukor and starring the great beauty Ingrid Bergman (in photo right) as the poor wife and Charles Boyer as the sinister husband. Hollywood also utilized a new screenplay by John van Druten and strayed quite a long way from the original play. This version cleaned up at the Oscars that year with Bergman winning best actress. Ran intends editing between these two versions in what should be a great night at the movies... with music.

You can catch all of this on April 13 in Jordan Hall at 8.00 p.m. It will also be an opportunity to wish Ran many happy returns, and for whom I pay special tribute in this blog.