WASHINGTON -- The Michigan Republican Party is seeking to increase its visibility in Democratic- and minority-heavy Detroit, and last week, it brought Sen. Rand Paul (R-Ky.) to the city to open the party's African-American Engagement Office. But if anything, the launch event put into stark relief just how much work the GOP has to do, when a largely white audience turned out to hear the senator speak.

In the 2012 election, President Barack Obama earned the support of 90 percent of the black voters who turned out at the polls.

Paul initially spoke at the new African-American Engagement Office on Livernois Avenue in Detroit for about four minutes on Friday. According to the progressive site Eclectablog, "The seats in the tiny space were filled with well-dressed supporters, most of whom were African-American."

Paul then went to a larger grassroots event at the Grace Bible Chapel, where there were protesters from the civil rights group National Action Network outside. The online invitation said the event was intended to "celebrate the opening of our African-American Engagement Office in Detroit."

Paul also spoke Friday at the Detroit Economic Club, where he proposed a plan to revitalize U.S. cities through the creation of "economic freedom zones," which would cut federal taxes in communities that have an unemployment rate of 12 percent or higher.

"Sen. Paul was a vocal opponent of the auto rescue, which saved over a million jobs, and led the Republican effort to shut down the government, costing Michigan's economy hundreds of millions," said party spokesman Joshua Pugh. "His special interest tax handout plan is nothing new. Here in Michigan, Rick Snyder gave $1.8 billion to wealthy special interests, and paid for it with billions in devastating cuts to our local communities and public schools. It's time for our elected leaders to stop the tax giveaways, invest in communities and improve education."

Paul has been trying to do more minority outreach in recent months. In April, Paul spoke at the historically black Howard University, becoming the first Republican elected official to speak on campus in years.

Still, he continues to generate skepticism, in part due to his criticism of the 1964 Civil Rights Act. In 2010, he said, "I think it’s a bad business decision to exclude anybody from your restaurant, but, at the same time, I do believe in private ownership."

On Sunday, Paul said he opposed extending long-term unemployment benefits, because doing so would be a "disservice" to workers. African-Americans have consistently had a significantly higher unemployment rate than whites.

Neither Paul nor the Michigan GOP returned a request for comment. 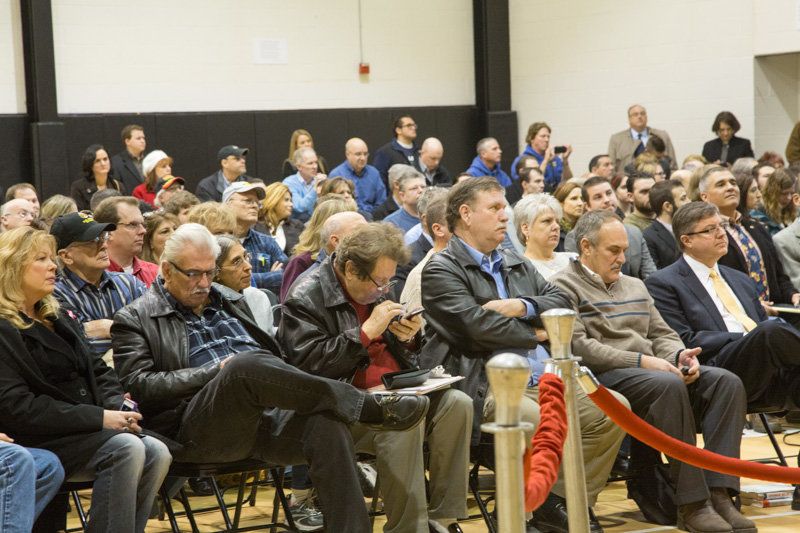 1 / 4
Grassroots Event To Greet Rand Paul
Sen. Rand Paul (R-Ky.) went to Detroit on Dec. 6, 2013, on behalf of the Michigan Republican Party and its opening of an African-American Engagement Office. The grassroots event at Grace Bible Chapel, however, had a mostly white turnout.
Anne Savage