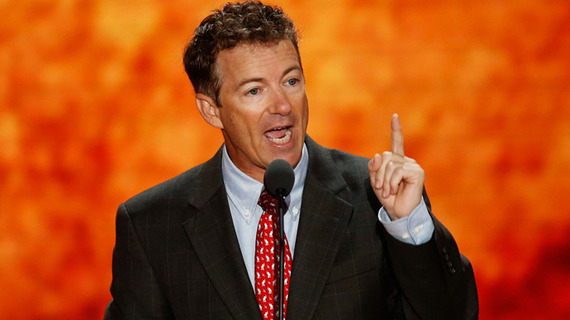 I'll offer highlights about the speech later, but I wanted to get the speech itself up now. In it, he identifies himself squarely as a realist in foreign policy, punches neoconservatives and isolationists, and embraces negotiations with America's rivals and enemies -- which puts him on the same page as Obama, Biden, Susan Rice, John Kerry and Chuck Hagel.

It's one of the smartest foreign policy addresses I have heard in some time -- and he takes on and seems to opposed the growing Senate bandwagoning now in play behind a new Iran sanctions effort.

Senator Rand Paul on US Foreign Policy at the 20th Anniversary Gala Dinner of the Center for the National Interest:

Good evening and thank you for hosting me. Congratulations on CNI's 20th anniversary.

When I was about ten years old, I used to play chess with an old Ukrainian named Pete Karpenko. Captain Pete, as we called him, told us stories of fighting the Bolsheviks when he was fourteen years old. He and his family were little more than peasants but they resisted the idea of collective farming. He fought with the White Army against the Bolsheviks and fled when the communists won. Fifty-five years later he still was afraid to return to the Soviet Union.

So, it's easy to understand that around my house, we had little use for communists or their sympathizers.

Like many conservative middle class families our inclination was to resist anything to do with Red China. In that black and white world, you were either for us or against us. Trade with China was thought to be trade with the enemy.

A funny thing happened, though, along the way. Many Conservatives came to understand a larger truth. As trade began to blossom with China, many conservatives, myself included, came to admit that trade improves our economic well-being AND makes us less likely to fight.

The success of trade with China made many conservatives rethink their view of the world.

People sometimes ask me what my worldview is . . . my response is . . . that even if you've criss-crossed the globe, I'm not sure that the world doesn't change by the time you return to the same spot twice.

I really am a believer that foreign policy must be viewed by events as they present themselves not as we wish them to be.

A few years ago, I read a review of John Gaddis' biography of George Kennan. I laughed when I read that Dr. Gaddis promised Kennan not to publish it until after his death and that twenty years later Gaddis' students were jokingly wondering who might die first.

I loved the book. To me containment is not a dead letter. I look at the worldwide menace of radical jihad and I think we need a long term vigilance like containment.

Kennan believed that there is "distinction between vital and peripheral interests." I couldn't agree more.

To me the assertion of a vital interest is the beginning of the debate not the end. When the President came to us trying to convince the Senate to support a military engagement with Syria, he acknowledged that any national security interest was ambiguous at best.

Because of the demand, by many of us, for more debate a diplomatic solution arose that may well do something that no military strike could perform . . . remove the chemical weapons.

The Syrian chemical weapons solution could be exactly what we need to resolve the standoff in Iran and North Korea. By leveraging our relationship with China we should be able to influence the behavior of North Korea. Likewise, we should be engaging the Russians to assist us with the Syrians and the Iranians.

Former Secretary of Defense Robert Gates commented on this in his new book, Duty. "In recent decades," he says, " presidents confronted with tough problems abroad have too often been too quick to reach for a gun. Our foreign and national security policy has become too militarized, the use of force too easy for presidents."
_________________________

Last year, I was appointed the Foreign Affairs committee.

I like foreign policy, especially the name calling. It seems everybody's got a name for themselves and even nastier names for their opponents.

So we've got neo-cons, realists, hawks, doves, isolationists, globalists, and idealists. Seems the only thing for certain is if you don't label yourself first, your enemies will.

I do think that the world of foreign policy has been turned on its head in the past decade.

Neoconservatives brag of their desire for engagement but increasingly preach a doctrine that is hostile to diplomatic engagement.

The irony is that the crowd that claims they want to engage, often opposes diplomatic engagement.

The irony is that this crowd wants to "project power" . . . but from inside an echo chamber that isolates itself from negotiation because "foreigners" can't be trusted.

The school of thought that beats its chest and seeks to spread worldwide enlightenment now promotes not a neo-conservatism but a neo-isolationism in which diplomacy is distrusted and war is. . . if not the first option . . . the preferred option.

I believe the answers to most problems that confront us around the world can and should be approached by engaging both friend and foe in dialogue. No, I don't naively think that dialogue always works, but I believe we should avoid the rigidity of saying that dialogue never works.

I believe we should approach diplomacy from the notion that dialogue is nearly always preferable to war but that potential enemies should never mistake . . . as Reagan put it . . .
our reluctance for war, with a lack of resolve.

Our response to 9/11 should disabuse any potential enemies of the belief that America is to be trifled with.

In order for both parties to perceive victory, I think both parties must save face or at the very least not lose face. Saving face is even more important if one party to the transaction is a Superpower and the other party is a second or third tier country.

The Chinese have finessed the concept to such a degree that they have three different words for saving face.

To me saving face is similar to what Sun Tzu wrote about leaving your enemy an escape. Tzu wrote: "To a surrounded enemy, you must leave a way of escape.

I would add -- that to a surrounded enemy ---- you must leave a way of saving face.

If you insist on unconditional surrender as a pre-requisite to diplomacy there will be very little diplomacy.

William Ury describes leaving an exit as an integral facet of wielding power, "Superior power is useless if it drives your opponent into a corner and makes him resist you with all his might. Leaving him a way out is a time-honored precept."

Short of unconditional defeat of the enemy, both sides must recognize that problem resolution requires . . . both sides to perceive victory . . . and both sides to save face.

The technological ease of war dulls our ability to be statesmen . . . . Karl Marlantes a decorated Vietnam combat veteran says that the great deficiency of legislators is their inability to make decisions as if they themselves were the warrior on the ground on the receiving end of mortar blasts.

There is certainly a time for war. But the threshold should be high, and the cause clear. Colin Powell was fond of saying that "war should be the politics of last resort. We should have a purpose our people understand and support."

When America is attacked or our interests directly threatened, our country should and will defend itself with the force and authority of our collective wills. We will seek no other military objective than complete victory over our attackers.

I doubt I've presented any new insight tonight that isn't already known to each of you and I hope I haven't insulted anyone....or too many of you....with a physician's thoughts on diplomacy.

Someone once said that there are really no new ideas there are only ideas that are new to you.

Thank you for allowing me to come this evening. If nothing else, I want you to know that I consider foreign policy to be an unending process of learning and that I am very open to learning new ideas, whether they are indeed new, or may be just new to me.

There are a number of policy areas in which I have fundamental differences with Senator Paul -- as is true usually between any two people -- but if I were to read this speech not knowing the Senator gave it, there is practically nothing in it with which I would disagree.

Charlie Cook thinks Rand Paul may very well be the GOP nominee in 2016 -- and if this speech is any testament to the real Rand Paul's thinking on foreign policy, I think he will be formidable on this front.