BOWIE, Md. -- Sen. Rand Paul (R-Ky.) renewed his call for criminal justice reform in a wide-ranging speech Friday at Bowie State University, a historically black college in Maryland. Addressing students, local leaders, and activists as part of his minority outreach effort, Paul stressed the need to roll back civil asset forfeiture and mandatory minimum sentencing laws ahead of a likely bid for president in 2016.

"If we’re for families with a mother and father around, we need to be for fixing the criminal justice system," he said, framing reform as an economic issue of interest to all Republicans.

The libertarian-leaning conservative spoke for about 30 minutes, referencing black leaders he agreed with on matters of criminal justice reform, such as President Barack Obama, Sen. Cory Booker (D-N.J.) and Martin Luther King, Jr., and telling stories about African-Americans who were unfairly criminalized due to harsh sentencing laws.

"If you smoked some pot or grew marijuana plants in college, I think you ought to get a second chance," he said.

Paul teamed up with Booker last year to introduce legislation aimed at breaking the cycle of incarceration for nonviolent offenders. The REDEEM Act would have automatically expunged or sealed records for juveniles who commit nonviolent crimes. Several of his supporters collected signatures on Friday for a petition backing the bill, which Paul and Booker reintroduced this week.

The senator also issued a warning about National Security Agency surveillance programs, reminding an audience composed of about as many African Americans as whites to "think about how Martin Luther King's phone was tapped." 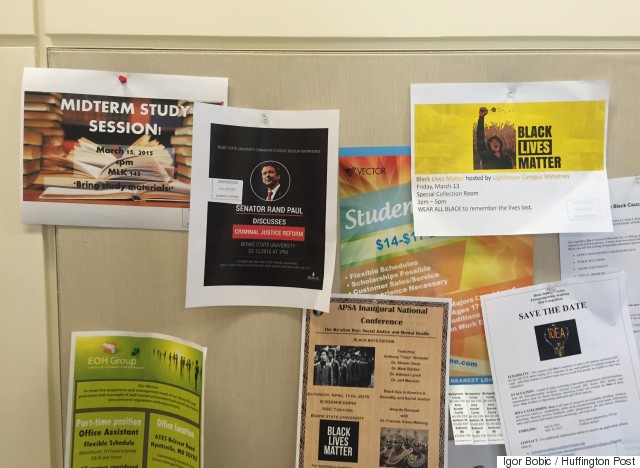 Flyer for Rand Paul's speech shares a space on Bowie State's messaging board with "BlackLivesMatter" events.

Compared to Paul's missteps during his 2013 appearance at Howard University, a historically black university in Washington, D.C., the speech at Bowie State went smoothly. But his staff wasn't taking any chances. Sitting in the back of the room was a man who, as if on cue, began to clap a little too enthusiastically at key portions of Paul's speech, leading the audience along with him. And Paul took just three audience questions following his remarks, all of them relatively easy.

For all of Paul's efforts to connect with black voters, one key issue went unaddressed: the Voting Rights Act, which is once again in the news following last week's 50th anniversary of the marches in Selma, Alabama. Congressional Republicans, including Paul, have been silent about plans to restore the law after a Supreme Court decision weakened its protections nearly two years ago.

One attendee, former Republican National Committee Chairman Michael Steele, was not impressed with the omission. He said that Paul and other would-be GOP presidential hopefuls would not be able to connect with black voters unless they changed course and called for the law's renewal.

"We should not run away from it. We should stay engaged. We should have someone put the bill on the floor in the House and Senate and roll with it," he told The Huffington Post after the speech. "You can work out what needs to be worked out that it is updated and applied appropriately. I don’t get the complications."

Steele, a former lieutenant governor of Maryland, argued that the issue would hurt the party come 2016.

"'Oh, we don’t need to do anything. We’ll worry about that later.' Really?" he said. "You’re going to go into the next presidential cycle with black voters thinking you don’t want them to vote?"

Reaction to Paul's speech among Bowie State's students, many of whom are newly registered to vote, was mixed.

Solomon Bickersteth, a freshman, said Paul had "a laid-back, sort of 'I’m with you guys' feel. He had the rolled up sleeves and jeans. It was interesting seeing him try to connect." But another student, Desean Chambers, said that Paul "could have connected more, I think with a little more pizazz."

Devon Williams, a freshman from Maryland, was unfamiliar with the Kentucky Republican before attending. But he gave Paul credit for showing up all the same.

"I don’t think even any other senator would have come," he said. "I mean, at least he’s here."