Pollsters consider the prospects for Rand Paul's candidacy. A plurality of Americans say current drug sentencing laws are too harsh. And Americans are more independent than ever, but not really. This is HuffPollster for Wednesday, April 8, 2015.

RAND PAUL ENTERS RACE WITH HIGH FAMILIARITY AND FAVORABILITY - Andrew Dugan: "As U.S. Sen. Rand Paul officially began his quest for the Republican presidential nomination Tuesday, nearly seven in 10 Republicans (68%) are familiar with the freshman senator from Kentucky. Paul also enjoys a positive image within the party: A majority of Republicans have a favorable opinion of Paul (51%) while 17% view him unfavorably, for a net favorable score of +34...[I]f some of Paul's signature political views stand in contrast to prevailing Republican ideology, it is not evident in his familiarity rating and net favorable score. Among four current and potential GOP candidates Gallup measured, only Jeb Bush, a politician whose candidacy in many ways symbolizes the very 'establishment' Paul is seeking to overturn with his presidential bid, is more familiar (81%) to Republican adults." [Gallup]

Competes for Tea Party support - Anthony Salvanto and Jennifer De Pinto: "When we look at people who are considering Paul and then who else they're considering, the heaviest competition comes from both the well-known names of Bush and Huckabee, but also from Cruz, Rubio and Rick Perry. There's no real surprise there: the latter three have all either come up through the Tea Party movement or - in the case of Perry - actively sought its support in recent years. Paul rose to prominence as part of the Tea Party wave in 2010, and today he still performs well among voters (independents as well as Republicans) who align themselves with the movement. He gets half of them to consider him, and has a consider/not consider ratio of slightly better than 2 to 1 with Tea Party backers." [CBS] 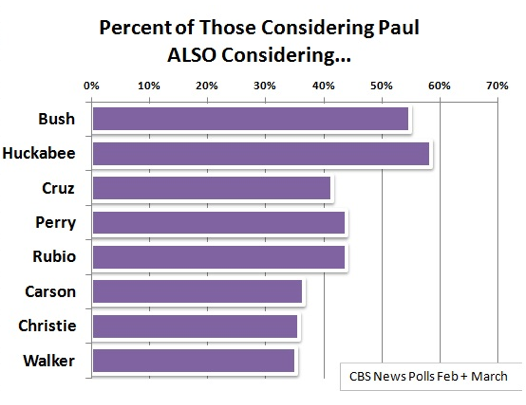 Paul can't rely on Libertarian base to win - Nate Cohn: "The libertarians remain too young and too few to present Senator Paul with a realistic path to the nomination. He has to win over a much larger share of more reliable Republican primary voters, who will have considerable reservations about Mr. Paul’s policies. The other problem he faces: Many of the voters most receptive to libertarian views tend not to vote… In one sense, you could argue that the libertarian wing of the Republican Party barely exists at all. According to a large Pew Research survey in 2014 of 10,000 respondents, 11 percent of Americans and 12 percent of self-identified Republicans considered themselves libertarian.... If we take a different tack and use issue positions, rather than self-identification, to identify libertarian voters, we still find only a small number of Republicans who consistently agree with Mr. Paul’s libertarian views. Only 8 percent of self-identified Republican-leaners in the Pew data take the libertarian position on four issues that he emphasizes." [NYT]

...but isn't matching his father's performance - Harry Enten: "Kentucky Sen. Rand Paul’s presidential campaign is less than a day old but already suffers from an identity crisis. Paul wants to win, but he can only do so if he is seen as more mainstream than his father, Ron Paul, who ran for president in 2008 and 2012. At the same time, Paul can’t completely jettison the far-left and far-right positions that have made him a hero to the substantial number of Republican libertarians who made up his father’s base. In Paul’s dream world, he’ll satisfy everyone. In the most likely real world, he’ll end up satisfying no one. The most obvious path for Paul to win the GOP nomination is to build on the 21 percent of the vote his father earned in Iowa in 2012, and the 23 percent Paul Sr. picked up in New Hampshire that year… But right now, Paul isn’t anywhere close to where his father ended up in either state in 2012. Paul is polling at a little less than 9 percent in Iowa and nearly 11 percent in New Hampshire....Paul is losing support across the board. While he was initially able to outpace his father’s 2012 success, his national numbers have been dropping over the last year." [FiveThirtyEight] 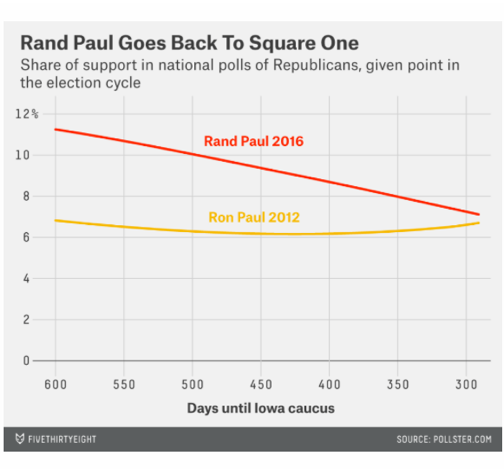 INDEPENDENTS REACH A RECORD HIGH - Pew Research Center: "Democrats hold advantages in party identification among blacks, Asians, Hispanics, well-educated adults and Millennials. Republicans have leads among whites – particularly white men, those with less education and evangelical Protestants – as well as members of the Silent Generation. A new analysis of long-term trends in party affiliation among the public provides a detailed portrait of where the parties stand among various groups in the population… The share of independents in the public, which long ago surpassed the percentages of either Democrats or Republicans, continues to increase. Based on 2014 data, 39% identify as independents, 32% as Democrats and 23% as Republicans. This is the highest percentage of independents in more than 75 years of public opinion polling….Millennials continue to be the most Democratic age cohort; 51% identify as Democrats or lean Democratic, compared with 35% who identify with the GOP or lean Republican… Republicans lead in leaned party identification by 48 points among Mormons and 46 points among white evangelical Protestants." [Pew] 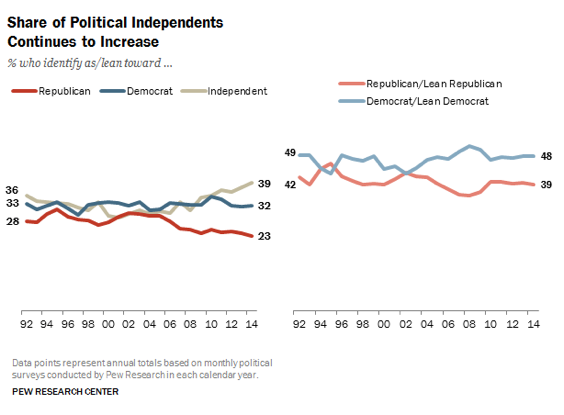 Yet leaned partisanship (and behavior) remains constant - HuffPollster: "More Americans identify as political independents than ever before, but that doesn't mean their actual political views -- or the way they vote -- have changed much... The increase in independents has been especially sharp since 2004 and has mainly cut into the number of self-identified Republicans, which has fallen by 6 percentage points in the past decade. But Americans' political leanings haven't shifted away from the parties dramatically -- or, really, at all. By many measures, we're more partisan than ever. Eighty-seven percent still say they at least lean toward one party or the other, the report says. And functionally, there's very little difference between a particular party's members and the "closet partisans" who identify as independent but lean toward that party -- the two groups tend to share opinions and voting patterns.... With leaners added to the count, the report says, 48 percent of Americans side with the Democrats, and 39 percent with the Republicans. That's largely unchanged from previous years. What the continuing growth in the percentage of independents may demonstrate is how unpopular both political parties have become." [HuffPost]

Interactive graphics - The Pew Research report includes a chart incorporating data from Gallup showing the trend in party identification [since 1939[(http://www.people-press.org/interactives/party-id-trend/), plus a set of interactive charts breaking out trends since 1992 by demographics. 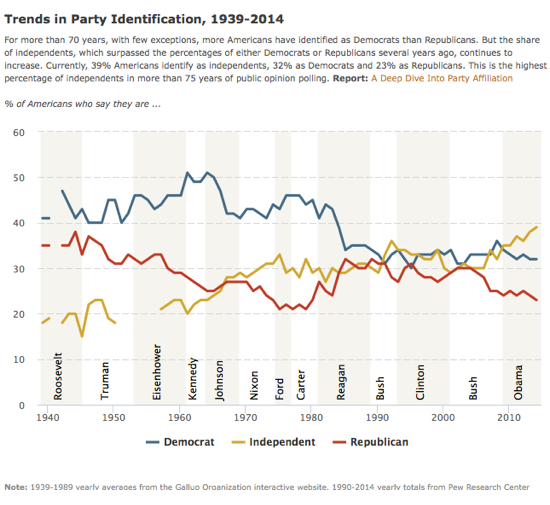 EXIT POLL: EMANUEL'S EXPERIENCE CARRIES CHICAGO MAYORAL RACE - John Dodge: "Thrown into a bruising run-off election, Rahm Emanuel scored a hard-fought win for a second term, defeating Jesus 'Chuy' Garcia on Tuesday, thus ending a mayoral campaign never before seen in Chicago. With 95 percent of the vote counted, Emanuel held a 55.5 percent to 44.5 percent edge over Garcia. CBS 2 exit polling data from Edison Research projected the final margin to be 55 percent to 45 percent… CBS 2/Edison exit polling, based on 1,300 interviews, supported that outcome. Voters preferred Emanuel’s experience and more clearly articulated plan for the city. Garcia polled better when voters were asked which candidate could bring about more change… Based on initial ward-by-ward breakdowns, Garcia carried predominantly Hispanic portions of the city, while Emanuel appeared to regain the African American vote that he lost in the more crowded February contest. The mayor also dominated the lakefront and North Side wards, as expected." [CBS Chicago, crosstabulations at NYT]

-Gallup finds a minor rebound in positivity toward the ACA, but half of Americans still disapprove. [Gallup]

-PPP (D) finds Hillary Clinton ahead of GOP rivals, but by a small margin than two months ago. [PPP]

-Three in four Americans say the Longmont, Colorado attack that led to the death of an unborn baby is murder. [YouGov]

-Mark Mellman (D) ponders the low recognition and favorable ratings for the 2016 GOP field. [The Hill]

-Ana Swanson maps the most liberal and conservative towns in each state. [WashPost]

-Overall, millennials were slightly less likely to live in urban areas in 2013 than they were in 2000. [FiveThirtyEight]