For so many young children, appearing in a Broadway play is a dream; a fantasy that will perhaps motivate them, but likely never come true. Randi Zuckerberg is no exception. "If you had asked me at seven years old what I wanted to do with my life, I would have said I wanted to sing on Broadway." But like many children, there came a point where the goal seemed unreachable. "My dreams came to a crashing halt when I got to Harvard and was rejected from the music major and thought gosh, I guess I need a new life plan." 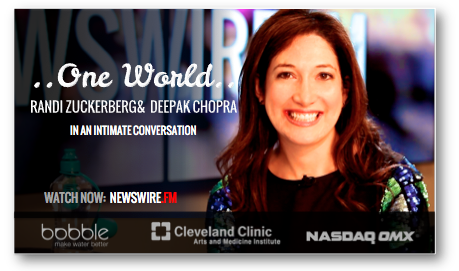 Randi had no trouble finding herself a very successful new life plan. She was one of the original employees at Facebook and has since started her own company that helps connect normal people with the tech world in ways that are useful and understandable. "Not everyone around the world sees technology as a 100% net positive in their lives; a lot of people see it as a challenge." She explained to Deepak Chopra when they sat down for a discussion on Newswire.fm's program One World.

Technology today presents challenges in our careers, in our love lives and in our ability to raise a safe and healthy family and Randi had a real desire to address many of these concerns that normal people all over the world have in the digital age. "So I decided to start a media company that talks to the every person about technology in their lives." Randi explains that the ultimate goal of Zuckerberg Media as well as her book, Dot Complicated, is to help women navigate the high tech world as the "CEOs of their families."

Most people would at this point have forgotten about their Broadway ambitions; satisfied with their success in this new arena. Randi Zuckerberg is not most people. It was in 2013, while giving a TED talk on how Broadway could enter the digital age that Randi's Broadway aspirations came back into the forefront when the producers of Rock of Ages saw her presentation and offered her a principle role. While there are many lessons that one could take away from this story, perhaps the biggest is quite simply that success in one aspect of life does not invalidate dreams in another. Randi has proven that success can be multifaceted. It is a story that we would do well to remind our children of often.