Wanting to offer some comfort to those affected by the Boston Marathon tragedy, a California woman named Liz Kosearas took to Reddit on Monday afternoon to see what she could do to lend a hand.

"I just wanted to show some small support so I offered to buy pizza for people who were housing stranded runners," Kosearas, a 23-year-old IT administrator who lives in Huntington Beach, Calif., told The Huffington Post of her decision to post a message on the subreddit "Random Acts of Pizza."

But while Kosearas was expecting to get a few requests for food from people in the Boston area, she said she never could have anticipated the massive outpouring of support she got from the Reddit community, many of whom offered help of their own.

"It was amazing. Within 45 minutes, hundreds of people -- people from all across the U.S., Canada, Puerto Rico, Barbados -- had started commenting and offering to send pizza," she said. "It made sense to [expand the effort] so I decided to start coordinating delivery to shelters and hospitals, fire departments, police departments, anywhere people were grouping."

Though Kosearas admits that she was initially overwhelmed by the response and "had no idea where to even start," she quickly jumped into action. With the help of a small group of other Redditors, none of whom live in Boston, delivery locations were determined and Anytime Pizza, a pizza shop located in Cambridge, Mass., was contacted.

"I'm not from Boston, I've never been to Boston. But I do know terrorism and this tragedy kinda hit home a little bit," said Brian Lapsley, a 26-year-old computer programmer from Oklahoma City, Okla., who worked with Kosearas to organize the pizza delivery. "I had the ability to help, and this seemed like a pretty easy way to help people quickly."

Lapsley, who says he remembers the 1995 bombing of the Alfred P. Murrah Federal Building in downtown Oklahoma City, was the Reddit coordinator who first contacted Perry Silveira, the co-owner of Anytime Pizza.

Silveira, Lapsley insists, was the "real hero" of the pizza effort. 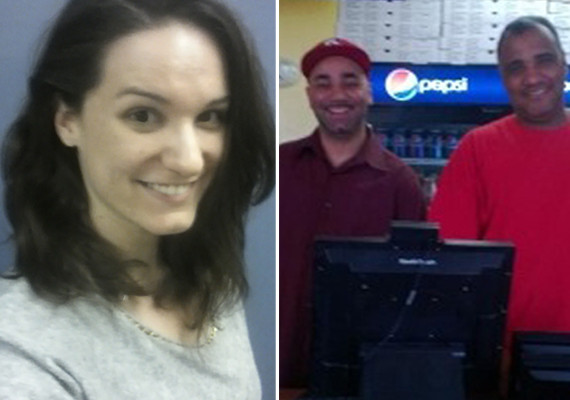 Liz Kosearas, left, posted a message on the subreddit "Random Acts of Pizza" and offered to help people housing stranded runners. Perry Silveira, in cap, the co-owner of Anytime Pizza in Cambridge, Mass., worked to send donated pizzas to places in the Boston area.

On Monday afternoon, Silveira had just stepped into his pizza parlor when he heard about the explosions.

"I turned on the news and I was like, 'Oh my God.' I couldn't believe it," he told HuffPost. "On the TV, I saw people trying to help, people collapsing and I was getting teary-eyed. You know that young boy who died? He doesn't live too far from me. I drive by there every day. It's something you just can't believe."

When Lapsley called and told him about what the Reddit community was trying to do, Silveira admits that he was initially skeptical. He had never heard of Reddit and was shocked to hear that so many people were donating pizzas to strangers who lived so many miles away.

However, It didn't take long for Silveira to jump on board with the pizza effort.

"I called my partner and said, I don't care what it costs, we just want people to eat," he said. "So we're just going to cook all day, and send the food out to hospitals, fire departments, police departments, shelters."

Silveira and his staff of 12 worked tirelessly through the night. As donations from at least 100 people came pouring in, they churned out and delivered hundreds of pizzas, salads, drinks and anything else they could whip up.

It was only at 5:30 a.m., when all their supplies had been exhausted, did Silveira and his team stop to rest.

On Tuesday, Silveira's team is continuing to deliver pizzas to the hospitals, fire departments and other locations that they may have missed yesterday.

"Whether we get donations or not, we're gonna continue," Silveira said.

"Perry [Silveira] is just a wonderful man," Kosearas said. "He worked all night long and was so happy to do it. I have no idea how to organize and I was way over my head, as everything snowballed so fast. Without Perry, everything would've fallen apart."

Lapsley, who said Silveira had even offered to match or even double some of the donations coming in, added that the coming together of the Reddit community and Silveira's efforts had brought a sense of hope and inspiration to an otherwise horrific event.

"This gives you faith in humanity," Lapsley said. "It's been really inspiring."