The TSA screening area at Reno-Tahoe International Airport's B gates isn't much to look at. It's a dark, cavernous processing area with well-worn linoleum floors that almost makes you feel like you're visiting a relative in prison.

But looks can be deceiving. I just had the best TSA screening experience in Reno, and I'm not alone. On a recent Monday morning, my entire family transited through Terminal B, and they could scarcely believe they'd been checked by federal screeners.

The TSA checkpoint at Denver International Airport looks like it's something straight out of a science fiction movie. It's a gleaming hall with the newest technology, including an array of shiny new body scanners. It's the kind of place where you'd expect to find a modern, friendly and efficient screening.

Yet here, too, all is not as it seems: A few days ago, I had the single worst screening experience of my life. I still can't believe what happened.

In America, there are two TSAs: one that understands its real mission and seems to respect the dignity of its passengers, and another that's operating under the mistaken belief that it's the last line of defense against terrorism and that it can break a few laws, and trample on the U.S. Constitution, to get the job done.

You can experience both today, with the apparent blessing of the Department of Homeland Security. Why? Because the government encourages "random and unpredictable" airport security, which means that it's in the TSA's best interests to have one airport that passengers actually like and another that's universally hated.

No one ever said this would make sense.

When we arrived at the Terminal B screening area in Reno, we were prepared for the worst. But the line moved quickly, and within less than a minute, we were standing in front of a TSO who greeted everyone with a friendly and genuine smile.

"Looks like you guys have been in the mountains," he said. Our sunburned faces had given us away.

Another screener checked our boarding passes and waved us through quickly. There are no full-body scanners at Terminal B, which doesn't seem to bother anyone. (And surprisingly, no terrorists have exploited that little loophole -- makes you wonder about the deterrent power of those scanners, doesn't it?)

After getting our bags scanned, a screener asked my 10-year-old son, Aren, what was inside his bag.

Oops. Turns out he'd left his laptop in his luggage by mistake. But the agent examining his bag didn't scold him; in fact, he cracked a joke about what else he might have packed.

"Got any Tasmanian Devils in there?" he kidded.

Within less than three minutes, the backpack had been rescreened and we were on our way.

Indeed. The Reno TSAers won the airport of the year award back in 2010, which suggests we aren't the only ones who like their work. 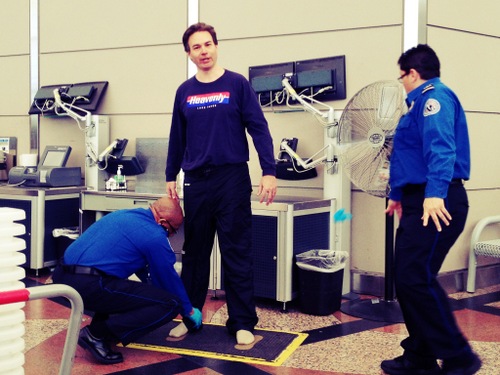 Missed it by a mile in Denver

Our experience in Denver couldn't have been any different. The pre-screening area is a confusing maze of ropes and missed cues. The agent asking for our ID tried to joke around with the kids, but his humor fell flat.

"And who are you?" he said to my six-year-old daughter, studying her ticket.

My daughter, who gets a little shy around strangers, said nothing. Mom and I answered for her, which only seemed to ratchet up the tension.

Then we were ushered into the screening area: a baggage X-ray, a metal detector, and a body scanner. The TSA has a state policy of not separating families and isn't supposed to ask young children to go through the body scanners, so it typically allows the whole family to walk through the metal detector at the same time.

But not this time. I was the last one through, and an angry-looking female TSA agent with a military-style haircut gestured me toward the full-body scanners.

"MALE ASSIST!" she screamed, refusing to turn to me.

"You are separating me from my family," I said, politely.

She refused to look at me, instead staring straight ahead, like a schoolgirl giving you the silent treatment.

My "male assist" screener was not gentle. On several occasions, he nearly pulled down my pants. He also forcefully grabbed my ankles, where I had an injury. I winced. That didn't seem to bother him.

For some reason, a second TSA screener began hovering around us. I have no idea why. Maybe they recognized me? Maybe they just enjoyed watching a colleague perform an "enhanced" pat-down?

I asked my son to take pictures of the event (see photo, above).

The experience left me a little traumatized. I mean, I don't really care if the entire Denver airport screening area sees my tighty whities, but I really felt as if the screeners were just harassing me instead of protecting America's transportation systems.

There's a word for that: security circus. It's an eye-pleasing spectacle that doesn't make any sense.

(And please spare me your inevitable comments about pressure-cooker bombers at marathons, which has absolutely nothing to do with airport security. Even if it did, would you really want mobile TSA teams scanning and frisking people at the next public race?)

It might be hyperbole to suggest that the TSA is at war with itself, that a small number of good screeners are fighting the incompetence and arrogance of a larger group of bad screeners.

But if nothing else, my own experience suggests this agency could benefit from a little more transparency. And consistency.

We know, for example, that some of the New York-area airports are cesspools of TSA troubles, with corruption, thievery, and botched pat-downs in the news regularly. We also know that the government rates its own airports and compares their scores to other airports.

Don't we deserve to know which airports have the best TSA agents?

One thing seems clear: If every TSA screening were like the one we recently had in Denver, I would be writing about the TSA every day instead of just once a week.

And if it were like the one we experienced in Reno, I would probably never have to write about the agency again. Except, maybe, to commend them on a job well done.

By the way, after you've left a comment here, let's continue the discussion on my consumer advocacy site or on Twitter, Facebook and Google. I also have a free newsletter. Here's the signup form.