I find myself as an adult constantly mourning the loss of social and cultural capital in the city of Damascus, a city which has been continuously inhabited by the most diverse of religious and cultural communities for 8,000 years. -- Rania Kinge

Born in Syria into a family of diplomats and bounced around to different parts of the world -- from war-torn Beirut, to New York to Geneva and back to Syria -- social entrepreneur, artist and jewelry designer Rania Kinge has made Damascus, Syria her home for the last 15 years. Here, amidst the constant threat of ISIS and rockets destroying her ancient land, Rania has launched a social enterprise cottage industry that has become the "tiny haven" where displaced women are employed to craft her artisan jewelry design lines -- I Love Syria and Damascus Concept. 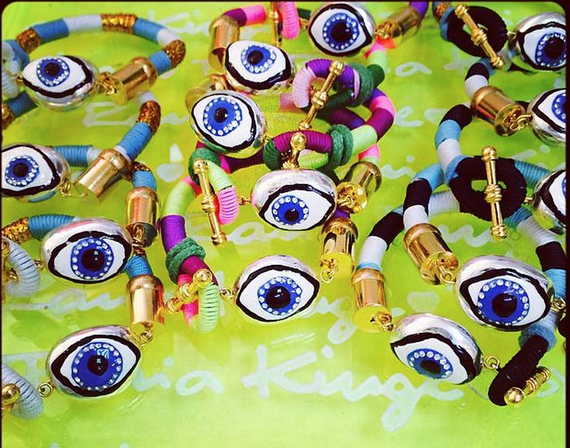 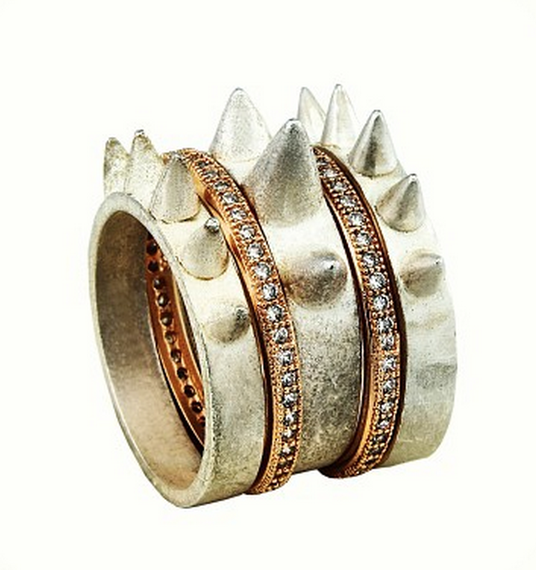 Her designs transform lives, instill self-dignity and transcend into world markets from Middle East (Lebanon, Dubai) to Europe (UK, Switzerland, Spain, Greece) and US, Canada, Australia and New Zealand. As death and dying creep ever closer just outside her workshop door -- the women find refuge in each other's company, listen to music, enjoy dark, strong Arabic coffee and construct "hip and trendy items" oblivious to the dangers which only enter the workshop in form of interrupting power outages and the common complications of living in a horrific war zone.

Rania is a Swiss citizen free to leave the war-torn Syria, yet her unswerving conscious decision to stay has empowered and strengthened her -- perhaps with a "delusion of self-empowerment" -- to ensure her ancient city is not abandoned. She forges ahead "passionate about both reviving the ancient artisanal wisdoms of its (Syria's) people and the local manufacturing capability of its economy" because she "cannot live just watching Syria fall to pieces, marginalized and relegated to the realm of third world country, its women living on charity, and its people constant victims of war."

Working under the daily rocket attacks remind her of "the fragility of life and mortality" as Rania joins millions of Syrians living with the stark truth of death and dying that can occur at an instance. A reality quite foreign to westerners, Rania admits.

Since the war began in Syria, now four years ago, more than 300,000 have been killed,

On the surface Rania and her employees are worlds apart: She in her western attire of shorts and t-shirt against the backdrop of conservative Muslim women who are young, widowed and mothers of young children whose war plagued lives has displaced them into life in shelters. Yet Rania and her employees share an unspoken bond in their intense love and commitment to their ancient homeland -- creating "a little sparkle of happiness and light in a city darkened with war" living in their "little bubble and laughing... at least until the electricity goes out."

The love of jewelry design fired up in Rania at age 25 when visiting New York City where she was mesmerized by a sparkling Swarovski bead. It was love at first sight with the "shiny bead" and the possibilities propelled her privileged life -- as a computer specialist living in Switzerland -- to opening a boutique to showcase unique jewelry products -- including some of her own design and other items made by artisans in Syria. Rania saw an ample opportunity to establish an outsourcing business in Syria and "compete on both price and quality." But that meant relocating to Syria to nurture an "underutilized and underdeveloped artisanal market" investing all her savings and time.

The Syrian war surprisingly "stocked a love" for Syria she was unaware she had, and a commitment to symbolically protect her nation from total obliteration soon integrated the Syrian flag -- "representative of the broadest Syrian identity" -- into some of her designs evolving her company into a social enterprise now called I LOVE SYRIA. 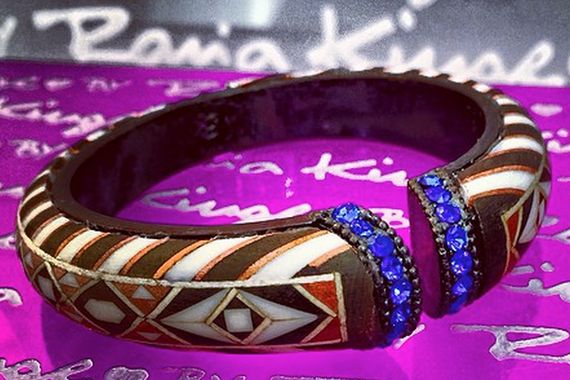 In parts, I belong to this place and I know that the historical narrative of Syria -- for those who care -- is not about extremism and destroyed cities and ISIS. Damascus is not some one-horse town in the middle of a desert with a couple of camels tied to a bunch of huts. It is about the treasures of humanity, the enlightenment of female leaders like Zanoubia who two millennia ago proclaimed treatises of religious tolerance; it is about villages which up until recently contained the remnants of the last living speakers of ancient Aramaic, the language of Jesus Christ.

Through her jewelry and accessories, Rania takes a stand in "purposeful, diametric opposition to the religious fanaticism, death and extremism that has pervaded" her society. Her vibrant designs employ light, art, youth, creation, colors and joy. The "group therapy" in her atelier empowers her -- as well as the women and their children -- to "stand taller" to deliver a message of hope saying: "We're still here". Considering herself a "small bridge" in the preservation of the rich and ancient Damascene (Ishani, etc.) design traditions to the world of art, artisanship and trend, she's well aware of the false perception she reflects to those both inside and outside the country -- as a sympathizer of the Islamists for empowering those displaced and a pro-government nationalist for the use of the Syrian national flag. 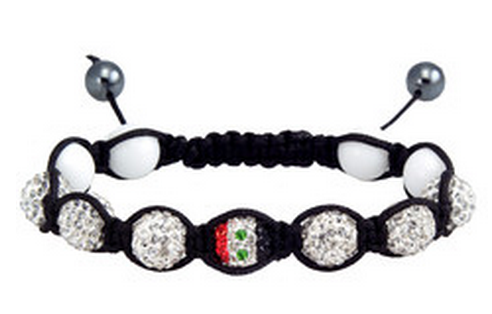 I'm in neither camp. My job is to work with people, women specifically. Our flag is much bigger than one leader or one institution at one moment in time. I am hearkening back in my art to an identity that once united us all as a people capable of creativity, skill, and beauty in diversity.

She's proud that her privileged upbringing at a boarding school didn't diminish her social awareness and sense of social justice, keeping her creativity and prosperity for the "human tribe" realizing how citizens of the world can bring communities together -- unlike the forces of war and destruction."

In-spite of the unimaginable daily hardships of life in a war zone, Rania is determined to press on with her social enterprise in Syria as a way to create jobs at home while having an opportunity to display her products in the international arena. Operating on a shoestring budget, she is yet to breakeven, but thrilled about the implementation and proof in validating "investment with a conscience" not only in Syria but also around the globe. She's hopeful that one day her social enterprise may receive the direly needed investment to purchase a generator for her workshop so she can expand her space employ more women and operate at a larger scale to create increased products and amenable livelihoods. 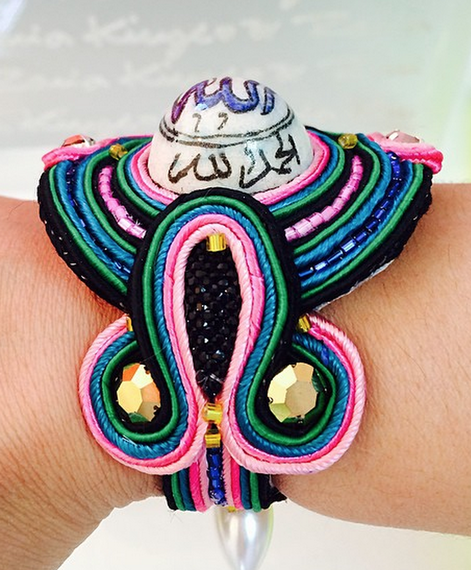 In the meantime she's determined to continue on the "path of least resistance." Living in a state of war where sadness is a constant companion, Rania misses peace of mind and happiness she once enjoyed. But it's the very state of living in a war zone that transformed her into an understanding person, feeling closer to friends and family realizing the importance of "love, patience, forgiveness, and above all faith." Her steadfast perspective on life and survival is optimistic knowing well that living with anything less than this conviction "would mean jumping on the first flight out."

Remaining in Damascus means becoming more resourceful in dealing with the daily challenges of running a small business in a war zone where bombs mean undependable infrastructure, and filling an order in time depends on how long power outages will cripple her production to a standstill or when the next delivery of commercial goods (or even money) into and out of Syria will be possible.

"The ancient Damascene craftwork on mosaics and Ishani in the deep archives of our national history is being used to give the women and girls I work with a new life. Based on the old, the new will thrive," Rania hopes to convey to the world "Syrians are really not a bloody people, despite the media coverage... or people who like to see heads cut off and livers eaten." It's incredible for her to witness what is happening to the "treasures of our civilization, on the sacred land, in places where the language of Christ is still spoken." 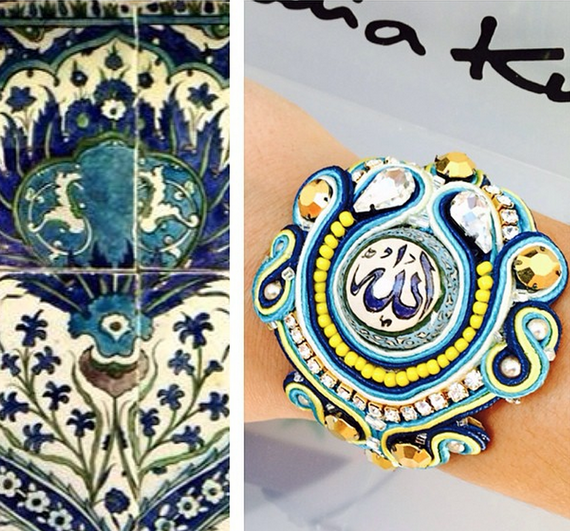 She hopes her art will manifest itself as a symbol of resilience and hope for the new generation to know that all will normalize soon.

I want to create a market of conscious consumers who ultimately appreciate great colors, quality and design, who love wearing our items, and who also subsequently care that their purchases directly help someone in Syria who has absolutely no other options or alternatives to make a living and feed her children.

There is no better weapon against narrow-minded ideological and religious tyranny than the prospect of livelihood, dignity and the optimism to bring people together with long history of tolerance and dignity. I am going to go on. I and anyone in my city can get blown to pieces at any moment, but I have what is perhaps a bit of that New Yorker attitude in me, and I am intentionally, willfully defiant. 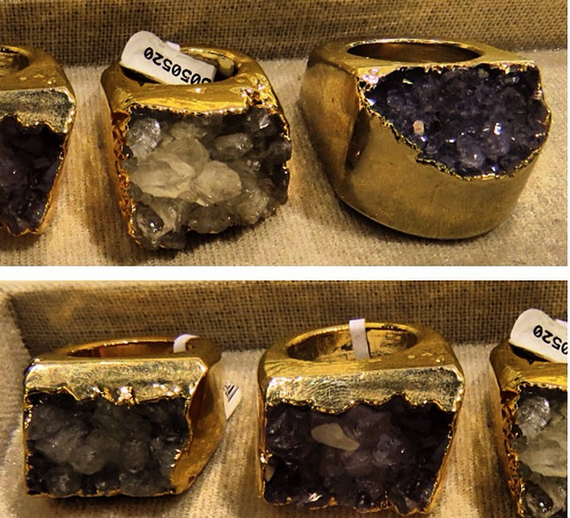