Centered around a highly advanced humanoid alien race known as the Aurocearians, victims of a devastating blow when the titular Gods (a mercurial bunch), angry with the race's arrogant behaviors, curses them by vaporizing every female hindering any hope for breeding. So what is a cursed race to do?

Enter the charismatic, Moniah Talsaiyr, an heroic Aurocearian, who finds Earth (circa 850 AD) and discovers that Aurocearians can peacefully coexist with humans, and most importantly, can breed with human females. Though the handsome, androgynous Aurocearians with their alluring, large eyes and flowing garb are significantly more polished and evolved than the grungy, Game of Thrones-ish humankind of The Dark Ages, they are not interested in conquering our planet or controlling its people. Thus begins an alternate history of our planet.

One of the Aurocearian's God-like qualities is their ability to periodically change/cycle into new incarnations over a few hundred year lifespan (think Orlando). This, of course, creates complications in Moniah's relationship with Book One's (Book Of The Past) Diana, a medieval human woman who has difficulty comprehending his complete physical change.

By Book Two (Book of the Present), Earth is a paradise - thanks in large part to the Aurocearians who have been coexisting with us for hundreds of years. Even Mars has benefited from the human/Aurocearian alliance by having become terraformed. Among the Aurocearian's contributions to humankind include governmental order, ensuring everyone has clean, efficient energy, and eliminating war and pollution. The Aurocearians are literally 'next to the Gods' in several ways - hence the title. 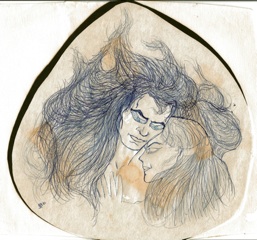 Also in Book Two, Moniah encounters a modern North American human, Emily Millstone, student of Aurocearian culture, and daughter of a powerful senator, together they become a force that not only transforms Earth, and the Aurocearians, but the entire universe.

But the future is not all Utopia. Annevnos, the series' grand villain and the Master Aurocerian engineer, threatens the balance of all living things. He wants to use the Dyson sphere (an impenetrable, constructed barrier encompassing the Aurocearian's entire native solar system) as an aggressive tool to punch a whole in the fabric of space, and drive the entire civilization back into the God's realm - essentially a War against Heaven. In addition, the Aurocearian engineers become a major threat to peace on Earth, irate at the humans becoming this empowered.

The portal through the Dyson Sphere to the Sphere Worlds
Next To The Gods'
complex and epic web of characters span centuries including a Caligula-like mad emperor (
Book One's
Arhahnis aka "Orange Eyes"), dragon-like/horse-like companions that communicate through music (Oscileans), and, a highly intelligent species, the Excilue, jellyfish-like beings (also equipped with superior technology) hailing from a gaseous world.

As with any quality science fiction writing, the gaseous Excilue are a prime example of Mongilardi provoking thought while tapping into well-pondered scientific territory. In this case, Carl Sagans' musings about the possibility of gaseous life forms existing on gas giant planets in our own solar system. 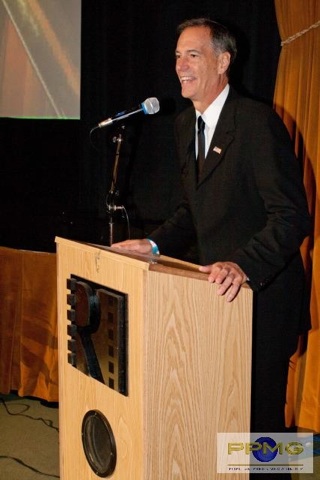 "What's poison for humans could be absolutely essential for other life forms. Going down miles into the ocean is unsurvivable for humans - we'd be crushed to death by pressure alone, but we can find organisms that thrive in boiling hot water coming from Earth's volcanic vents - which is as alien as anything. The wonders of science and the history of scientific exploration are what I love about writing this genre."

"For steady reading, science fiction was my go-to genre. My mother has called this book series, The Trail of Tears (laughs), because I started working on Next To The Gods when I was seventeen, but the odd thing is even though the writing changed dramatically, the title was always Next To The Gods. In my earlier days of writing it - before computers - I used to travel with this suitcase that weighed ninety pounds because I'd keep the paper drafts in there - all written in blue Bic pens. My hand is still screwed up from writing with those pens (laughs). And I was so paranoid about leaving it anywhere that I'd travel with it everywhere."

Next To The Gods is a great read. Though it never treads into areas inappropriate for savvy junior high age readers, make no mistake - this is a highly sophisticated, Wagnerian genre series for adult fans of science fiction and alternate history.

Next To The Gods' Books One : When Gods Walk Among Us and Book Two: The Fate of Worlds can be found on Nexttothegods.com, Createspace, Kindle, Nook, and Amazon.