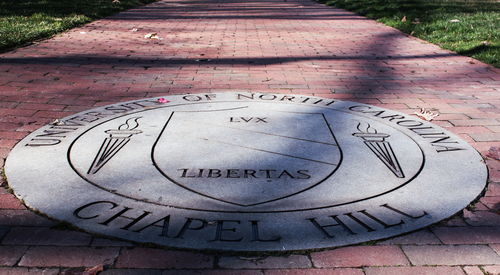 Weeks into my undergraduate career at the University of North Carolina at Chapel Hill (UNC), a friend told me she had that been raped a few days earlier as part of a fraternity "initiation process." I was a young advocate; I had heard stories of assault and I knew how to respond to survivors, but I had no idea what to do within the UNC university system. Therefore, I just went into action mode; my friend and I sat down in the wooden chairs in my residence hall room and began to Google resources and options for reporting... hours later, we still couldn't find the proper university protocol.

When she asked me about my involvement in violence prevention, I shared that I was a recent rape survivor as well. We brainstormed, and together we came up with an idea: I would go to an administrator and report my assault the following week. I would figure out the resources available, and then I would share with her the process so that she could report as well.

We made a pact.

The next week I tried to report my assault. I was incredibly confident in my story as well as my new university home, and why wouldn't I be? I was raped. It was violent. He was wrong.

"So why are you here today?" the administrator asked me.

"I want to report what happened and get counseling. I was raped."

The response which I received left me both speechless and confused:

"Well... Rape is like football, if you look back on the game, and you're the quarterback, Annie... is there anything you would have done differently?"

I was then handed a multiple page-survey to fill out about my rape.

After creating a new university reporting policy for survivors, and becoming public with filing an Office for Civil Rights (OCR) and Clery Act complaint against The University of North Carolina (UNC), I have received hundreds of emails, letters, Facebook messages, and phone calls from across the country. Though many survivors have shared their stories with me, hearing: "You are the first person I've ever told," is still a daily reality. Unfortunately, this is not surprising.

According to the U.S. Department of Justice 33 percent-42 percent of sexual assault survivors tell no one about their assault, and only 5 percent of rapes are reported to the police.

This begs the question that so many continue to ask: Why do so few survivors of sexual assault report their experiences?

After surviving a sexual assault, UNC student Sara Isaacson explains that she didn't report to law enforcement because "[her] assault didn't fit the narrative of rape and 'stranger danger' that [she] had grown up with."

Like Sara, many survivors rationalize that their experiences "weren't bad enough" to report to the police, to talk about in court, or to discuss with a university official. According to a study by the U.S. Department of Justice, college women who were sexually victimized (according to U.S. legal definition) were asked: "Do you consider this incident to be a rape?" 46.5 percent of the women answered "yes," 48.8 percent answered "no," and 4.7 percent answered "don't know."

While confusing to some as why the recognition of abuse would even be an issue, the self-doubt regarding reporting assault can be traced back to our cultural attitudes and the need to redefine and categorize rape. As Andrea Pino mentions her Huffington Blog, "Politically, the spectrum of what constitutes assault has been reduced to what can often feel like an impossible checklist or comparison chart."

Recent national conversation has not helped:

"When was the last time you heard about a rape on campus?"

Was it "legitimate" enough to report?

Was it "forcible" enough to report?

With questions like these coming from supposedly educated politicians or newscasters, one can only imagine the conversations happening on college campuses.

Many survivors are told that whatever happens to them is their fault, a message which is continually reinforced by friends, media, community groups, and university administrators.

A student who was raped at UNC last semester explains her decision to not report because of shame she felt within her religious community: "I was on a retreat with my Catholic group," she said. "The leaders told the group explained that 'good girls don't get raped,' and that 'You're a whore, and God doesn't protect whores.'" While indeed extreme examples of victim blaming, statements like these are prevalent and seamlessly woven into our lives.

But sexual violence is not just an issue at UNC. Juliette Muellner-Grimmett, a former student at Skidmore College, shares that she didn't report her rape due to lack of information and fear of victim blaming: "I was a first-year student and he was on the lacrosse team. We had mutual friends and I didn't want to be judged and called a liar, or a slut."

Even if Juliette and Sara would have reported, however, the process of adjudication might not have been easy. Police and university administrators alike ask victim-blaming questions, causing survivors to re-live their experiences and doubt their decision to speak out.

While these are quotes from North Carolina survivors, the culture of shame and victim blaming does not reside within our state or country borders.

It will go badly for you

Beyond the victim blaming and fear of not being believed, the survivors who come forward with their stories are often re-victimized.

Recently, when my co-complainant Landen Gambill spoke out about her assault, she was charged by UNC's Honor Court with creating an "intimidating environment" for her rapist. Even further, when speaking out about this charge and alleged retaliation, UNC Vice Chancellor Crisp responded that he "[knew] of no circumstances where the good faith report of a rape would result in Honor Code charges," implying that Gambill's claim of assault was not made in "good faith."

While Landen's case is a only one example, retaliation against a survivor who comes forward is not at all unusual, regardless as to the reporting method (university or police) they choose to use.

Professor of Psychology Rebecca Campbell, Ph.D., an expert in the neurobiology of trauma, conducted a study comparing "victims' health and well-being, psychological health and physical health" for those who reported their assaults to the criminal justice system against those who did not choose to report. The results were not pretty. As Campbell explains, "the results are exactly what none of us would want, which is victims who go to the criminal justice system -- their mental health outcomes are worse."

With the overwhelming anecdotal evidence at UNC alone, supported by the research that shows "reporting makes it worse," how can anyone blame a survivor for not wanting to report?

As a society, we individualize issues; we can easily say that an untrained person responded that "Rape is like football" or that an individual unknowingly charged a survivor with creating an "intimidating environment" and to some extent, that is true. We can make the issue of rape just about UNC, Amherst, or Delhi because it makes us feel better to know that sexual assault is a problem "somewhere else."

However, regardless of the institution, survivors don't report assaults, and that means we have a bigger problem. By reducing the conversation to numbers of victims instead of the fact that there are victims at all, institutions betray their students. And when conversation is minimized to protecting institutional reputation through superficial compliance, universities are silent bystanders in the rapes of their students.

I acknowledge that no university counsel, no country, or no congress can legislate culture change; we as a society can educate ourselves, and we should create and enforce policies which support and empower survivors of violence.

Rape happens here, and we need to talk about it.

Until we can recognize that the statement "Why didn't you report, I would have" is victim blaming, we will have much work to do.