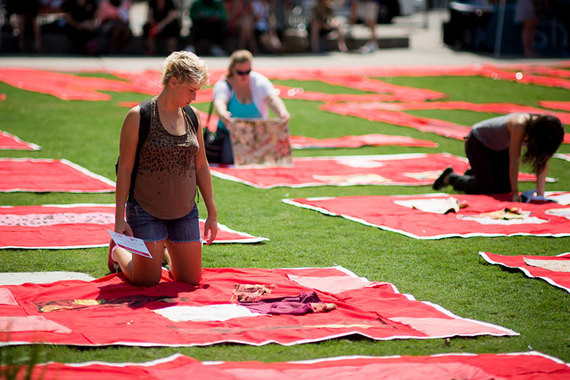 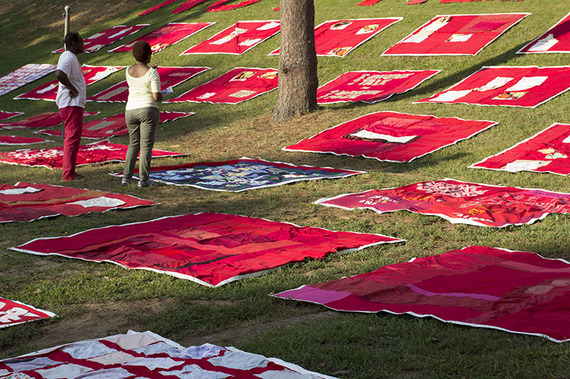 Yesterday, I helped unfold and lay out 225 stories from survivors of rape and abuse in a public park in the heart of downtown Baton Rouge. For three hours, the downtown square was transformed into a monument to survivors of rape and abuse. 250 visitors found out about The Monument Quilt through local partners, TV stations and while passing by. All showed appreciation for the project and paused to hear and honor the stories of survivors.

"Witnessing the quilt was very emotional and I would love to find a way to keep a permanent memorial in our community to support survivors," said Raina Wirta, Executive Director of Elevators Project.

Survivor-led art and activist group Force is traveling with The Monument Quilt on a 13-city US tour. By the end of the tour, an estimated 4,000 US residents will have witnessed the quilt and the stories contained within.

We left our hometown Baltimore, MD on Friday. In a 15 passenger van, we have carried 225 quilt squares, 571 yards of fabric and over 1,000 pounds of cargo across 9 states. At the present moment, we are driving through Northern Arkansas on our way to Quapaw, OK for a display in a few hours. As we unpack the quilt, we will meet leaders from Quapaw Tribe's domestic violence program and environmental advocates LEAD Agency. In the van are Force co-founders Rebecca Nagle and Hannah Brancato, and healer-in-residence Shameeka Dream. Dream is a healing artist who has been involved in the Monument Quilt since the first-ever workshop at the Spiritual Empowerment Center in Baltimore, MD in August 2013 and is holding healing space at each display.

The Monument Quilt tour is an intense journey. As the organizers of the project, we are carrying the weight of the quilts, both literally and symbolically. As a survivor myself, at times the weight can feel like too much. However, I feel greatly uplifted through the community and individual transformations I see happening with every quilt display. I can't change what happened to me, but I can change the culture that created the circumstance of my abuse.

"After my incident of abuse, I literally sat in the hospital and thought this happened to me because I was meant to speak about it publically," says Dream. "I am part of the Monument Quilt because this is my life work. As a healer, I want to see healing happen more in public space. So that healing can be as common as walking down the street."

Even though I am around it constantly, the power of the quilt still surprises me at moments. 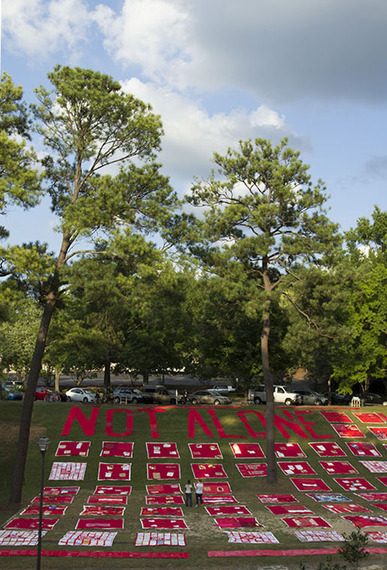 In Birmingham this past Sunday, the display stopped traffic. "I was driving when I saw the words 'NOT ALONE'. I had to pull over because it was so powerful," said Meg McGalmery from Crisis Center, Inc, a community partner of the quilt.

Sewn onto one quilt square are the shorts and t-shirt the survivor was wearing at the time of their assault. The square simply states, "STRONG". 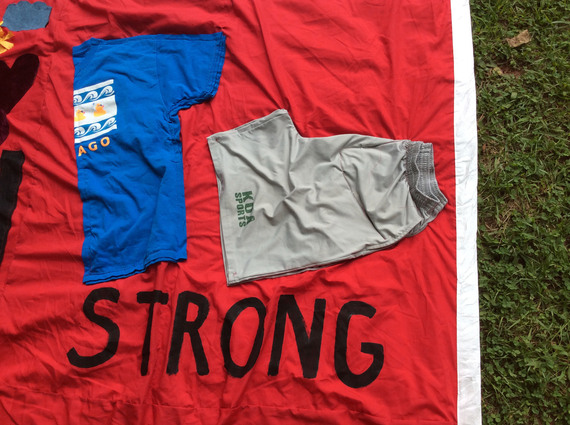 And how is the public reacting to the quilt so far?

The quilt has not been met with hostility, ignorance or anger. It shows, that when given the opportunity, our country is ready to support survivors.

"At first I didn't know what the quilt was," stated a passer-by in Birmingham. "While I was deeply moved by the stories that I read, I was even more moved by watching my community come together over this topic. I think people are ready for it."

Americans are also showing their support on social media. At noon on Tuesday Aug 12, over 400 supporters tweeted and shared the message:

"I want this country to publicly support rape survivors, not publicly shame them. #MonumentQuilt Tour #NotAlone" 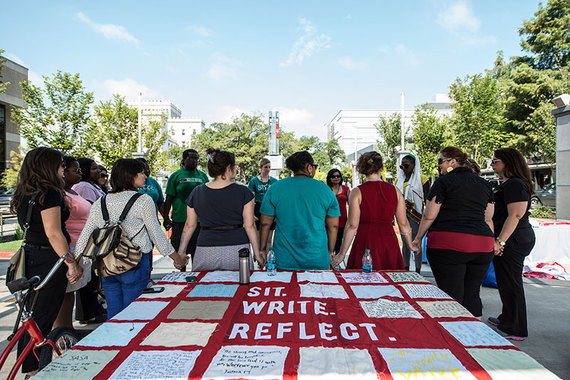