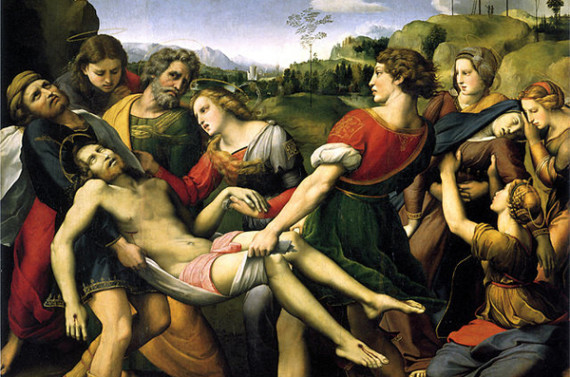 Raphael’s Deposition (1507), one of the highlights of the Galleria Borghese’s collection, has been severely damaged because of a faulty air conditioning system in the Rome museum, the Independent reports.

A High Renaissance masterpiece, the wood panel became warped in the Italian summer heat. Staff have done their best to save it, but with an AC described by director Anna Coliva as “completely worn out” there was little they could do. The staff initially used improvised methods such as opening the windows and placing fans and a dehumidifier next to the painting in an attempt to let to let it straighten on its own.

When those efforts failed to produce notable improvement, the painting was removed from the gallery for emergency conservation. Those measures have considerably reduced the damage to Raphael’s Deposition, but, according to the Independent, it remains unclear when the AC system will be fixed and to which extent it will be upgraded.

The Galleria Borghese’s AC problems are nothing new (“Borghese Gallery’s Masterpieces Threatened by Shoddy Maintenance“). This past May, Coliva raised the alarm, telling the Italian press that her requests to have the gallery’s climate control system updated had been repeatedly ignored by her superiors. Rome’s Head of Museums Daniela Porro brushed the accusation off, claiming that the situation wasn’t as serious as was reported.

She couldn’t have been more wrong, it seems. Although some maintenance work was eventually done following Coliva’s complaint, many other major artworks could still be at risk as temperatures remain high by conservation standards.

Acclaimed as one of the world’s most prestigious ensembles of Renaissance art, the Borghese collection was started by Cardinal Scipione Borghese in the early 17th century. It features paintings by the likes of Caravaggio, Titian, Veronese, and Correggio, which were left unprotected as the temperature in Rome rose above 35 degrees Celsius (95 Farenheit) this summer.

Many gallery-goers complained from the insufferable heat inside the galleries. “Some customers even felt overcome—and unfortunately, it wasn’t due to Stendhal syndrome,” an official told La Repubblica, jokingly referring to the condition which is said to cause fainting when viewing great works of art.